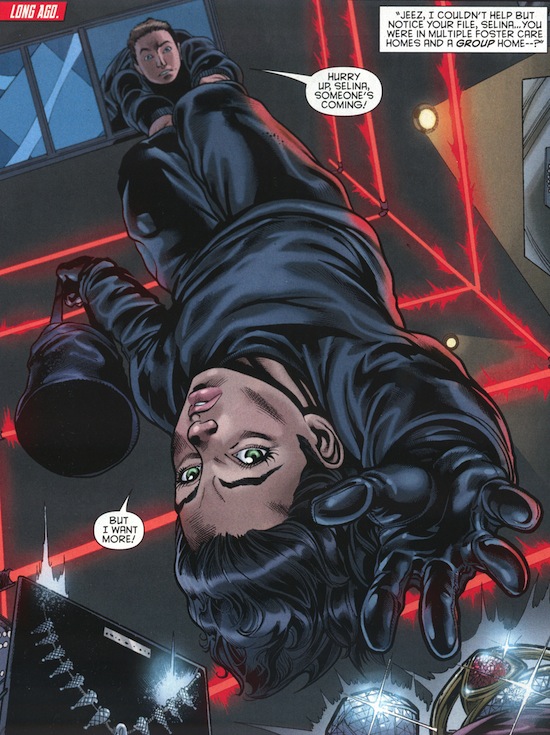 After the simple aspirational metaphor of The Dark Knight Rises and its token have-and-have-not subtext, it’s a breath of bracing, smoggy air to see the upward-mobility psychodrama of Annie Nocenti’s first issue of Catwoman (#0, out yesterday). In this fresh imagining of the franchise written by a legend of the industry (and HiLobrow usual suspect), Selina Kyle is an abandoned child figuratively and literally clawing her way up the social order, and the Dickensian capitalism she contends against (complete with most-unwhimsical Faginesque orphanage director) is retro that’s depressingly, enlighteningly on-time. In an economic wilderness where she can see many who are born into their spoils, Selina turns to stealing what gives other people comfort while a hidden past that might sustain her remains unclaimed. Adriana Melo’s sleek artwork provides an ambiance of affluence with queasy hyper-real clarity, as if it’s straining to stay focused at the edges. Born in trauma like her eternal foil Batman but adrift in uncertain identity rather than defined in focused vengeance like he is, this is the first vulnerable Catwoman I can remember, but all the more compelling as we identify with her struggle to understand herself and wonder if she will walk the ledge of her misgivings with grace or fall, or leap. In a starting-point issue like this one, we usually see how superheroes “get their powers”; Nocenti’s Catwoman, like many of her real-life counterparts in an era with the ideals and advances of feminism wiped from public memory, will have to create herself on her own.