Off-Topic brings you over-the-transom, on-tangent essays, dialogues and subjective scholarship on an occasional, impulsive basis. This round, for the fleeting days of summer, a look inward and a call back to the perpetual motions of our ephemeral lives and the permanent residence of our traumatic past…

Can we be truly together when our own selves are scattered along the path of our lives? My Favorite Person doesn’t ask this question, not outright, but places it in the mind of every witness, where the answer needs to be. 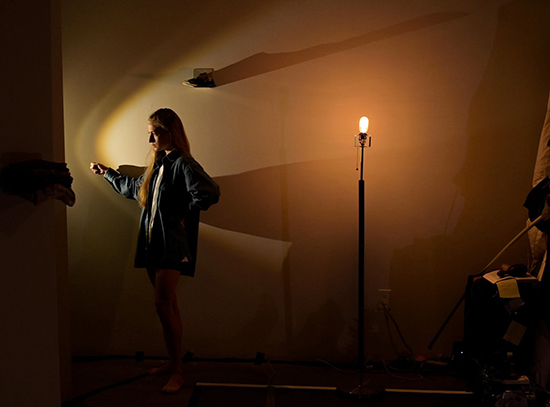 Conceived by dancers Tana Sirois and David Glover with director Polina Ionina, My Favorite Person is a narrative in movement, the play of moods and reactions, embrace and isolation, spinning with miraculous flight through the superdense lifetime compressed into the play’s duration. We’re in the living space of an unnamed couple literally going through the motions of unremarkable, momentous daily existence. Sirois and Glover are already cycling though the morning coffee and nighttime cuddle as we’re filing into our seats, and we’ll see this repeated with minor variations and at different paces a few times more. It’s like a mourned memory stuck on loop, a bubble of spacetime in perfect snowglobe stability. As this scene draws more memories into its gravitational core, we at times see one of the dancers freeze while the other keeps moving, rudely awoken and set emotionally adrift like an old-school celluloid film image slipping its sprockets and going off-register. 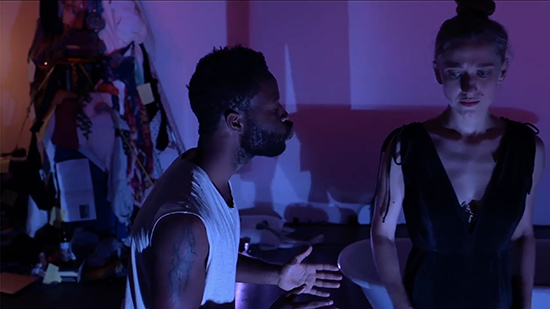 The whole and the parts are in a constantly fluctuating distance from each other; at the backdrop of the minimal domestic set, love notes on random sheets of paper hang as if suspended in flight, a whole tome decomposing; a pile of household belongings which the players periodically go to for props is like the rubble of personal history. Similar fragments float around the couple in the form of a lovely and poignant sound-collaged score; fixed on Sirois and Glovers’ compelling performances, we only half-hear these oral histories of love, elation and regret, which matches the characters presumably being only half-aware of what this narrative could tell them — in their unspoken roles we don’t hear them either, and we can wonder when the two ever hear each other. 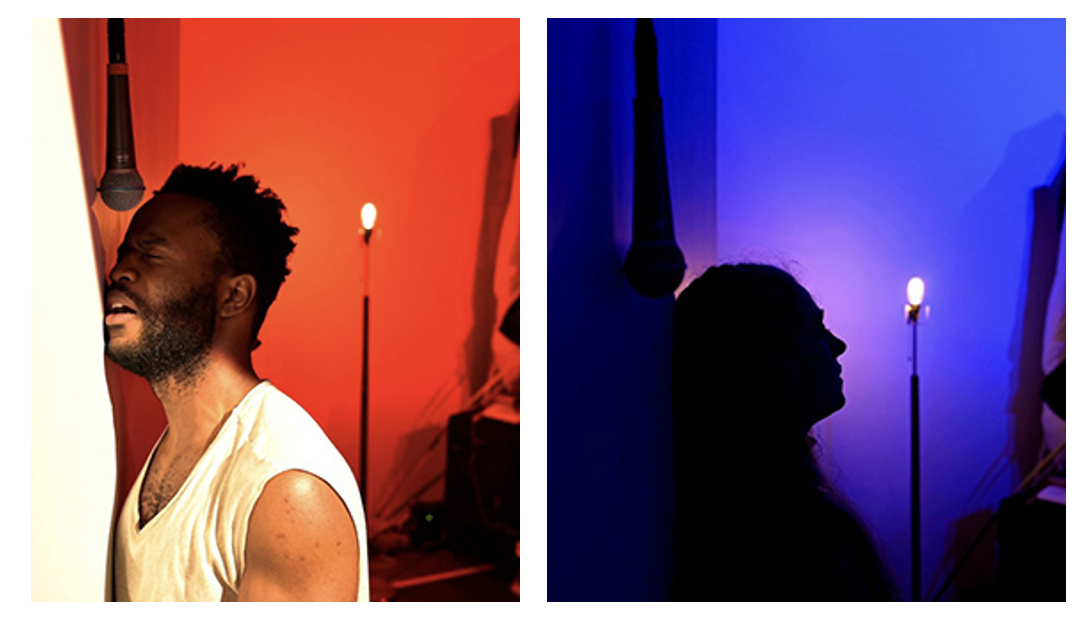 But still, a vast, tiny story is told. The earliest theatre depended on motion, even for a long time after its likely pre-verbal beginnings; Sirois and Glover’s bodies and faces take this tradition forward, in a setting whose low light, close boundaries and spare furnishings could just as easily be an apartment, a small amphitheater, or a cave. Motion requires bodies, and the dancers take intense, transcendental consideration of the presence and workings of their own. Everything must be conveyed in movement, and so Sirois’ face is a dance of expressions, Glover’s fingers become an independent character, at one point the two performers’ hands swan in synch, the rest of their bodies barely remembered, in a gestural ballet. The swirl of atoms and the passage of our burdensome bodies are all in play and in counterpoint; a shadow, the drops of water from wet hair caught in some light, make it feel like every level of matter and energy is in orchestration. This includes the percussion of steps and the cadence of breathing, a language without words; those sounds count as physical, and more profoundly are not separable from the soul — emotions, after all, are experienced in the mind, but are produced by the body, and this is a memory that Sirois and Glover hold in both. 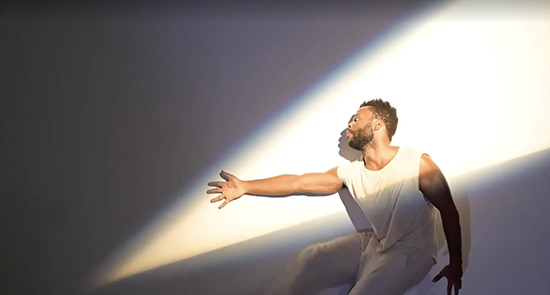 As I saw the dancers draw together and pull apart, their motions felt to me not so much a clockwork as an orbit, tracks of life on which we travel and can mistake for our own motives. Some are meant for us; others caught us arbitrarily; all are difficult and dangerous to break. Though tracing some full circles, My Favorite Person, bravely, does not in any settled way “end”; we will each decide what parts of us we saw in them, and where we go next. 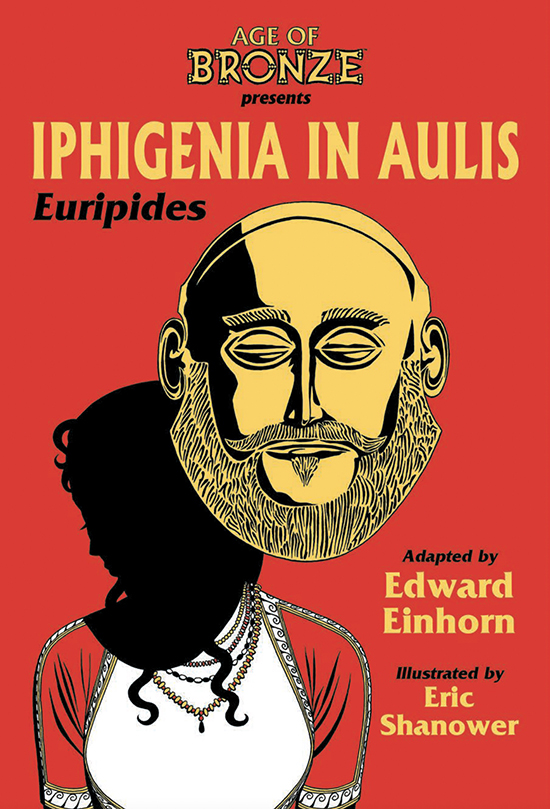 Uncoupled from most conventional language, My Favorite Person’s duo shows us what seem like pure raw feelings independent yet still in the shape of their bodily vessels, somehow visible and mobile; the ghosts sealed inside us for our own time. This is both present and primal, as is the ancient Greek drama reincarnated in Edward Einhorn and Eric Shanower’s hybrid graphic text Iphigenia in Aulis (Image) — portraying figures who were antique and allegorical even when the play was written, and haunting the social imagination ever since; the script that dysfunctional Western “civilization” is still reading from. Fittingly, the book unfolds, partially, as a script — Einhorn & Shanower had planned a graphic novel which branched off into a staged adaptation and looped back to this artful assemblage of text, typography, imagery and intersections of them all. A choral work, if you will, of artforms alongside each other and resonating in turn. 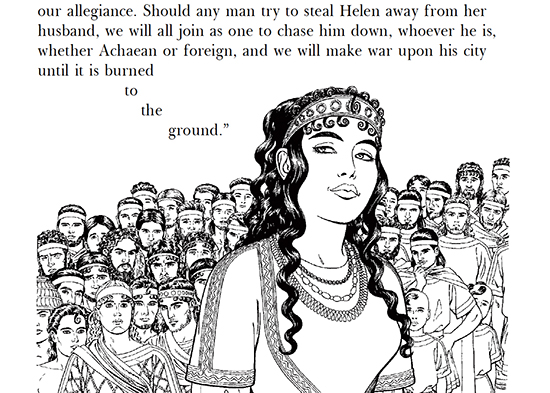 Words creep across the page, bleed into drawn panels where they become dialogue, complement and counterpoint images they end up next to; it’s as if the energies of the story rest uneasily in any one mode of expression, and the passions of its themes advance and retreat between unspeakable emotion and unseeable atrocity. Shanower’s images have a classical stillness and lavish precise line that makes them feel like monuments while also epitomizing a single troubled family’s misery; Einhorn’s insightfully interpreted text chisels deeply the grand and intimately destructive acts being contemplated like wounds carved in history, which don’t have to be witnessed to be felt. 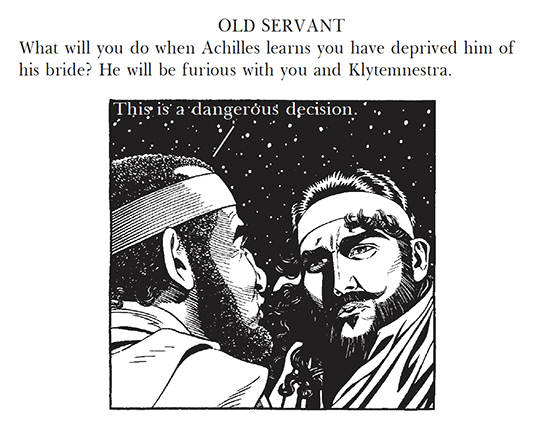 The illuminated aesthetic has a pulpy immediacy one can conjecture is closer to the bardic tradition’s essence than many a more academic iteration, though these are supremely cerebral creators with a fine sense of the intuitive, the exact, and when to pursue either. In this tale of a kingly father (Agamemnon) convinced the gods require him to sacrifice his own daughter (Iphigenia), to prevail in a war based in his brother’s wounded male ego and thwarted sense of possession (Helen of Troy left him) — and in the attempted resistance of the possessed, including the queen (Klytemnestra), her daughter, and the single principled male in the entire army (Achilles) — we see the founding organizational principle of Western society: human bondage, be it slave to master, wife to husband, young to elder, commoner to king or king to god. Euripides’ play, permeated with a bitter skepticism of destiny and who gets to write it, seems to strain at some of these bonds; Einhorn & Shanower’s multi-voiced modern reflection of it attempts a breakout across all planes.