Off-Topic brings you over-the-transom, on-tangent essays, dialogues and subjective scholarship on an occasional, impulsive basis. This time, as we lay a year to rest, remembrances of a life the author was late to start looking back on… 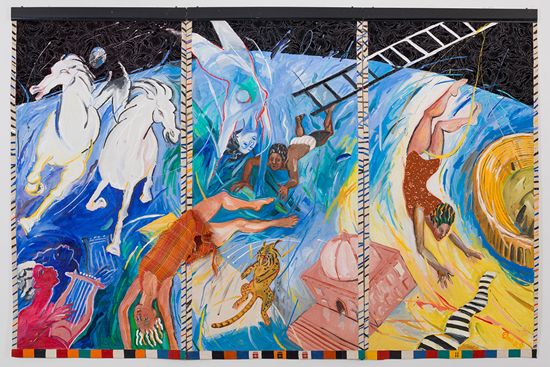 The past lets go of you by inches, the dissolve of one fading movie scene into another, the sequence skewed. For the few years after I moved away from my college town, faces would recur out of context and far from home, the zine publisher who showed up as a co-worker’s boyfriend, the bar-band guitarist who was profiled as a fav son in the local paper of the town I moved to, the faux-tribal tattooed and pierced punk art-student selling me my ticket from behind a window in the Hoboken train station. These collected thickly in my early adult life and then thinned out like a dispelling dream. Some of the faces stayed reliable, but just as random; my path would wind back across that of my teacher, Emma Amos, at unforeseeable intervals. This was a sign of the past I’d held onto, or more precisely the future I’d spun out; a teacher remains a part of your life permanently, and in a world as small as the arts, can be a regular presence too, even if no one’s consciously going out of their way. Gallery-show notices would cross my desk at the culture-rag I worked for after art-school, and I’d pick Emma’s out of the stream to review; she’d have a talk at the Montclair Art Museum or be on a panel in the middle of some park in South Orange.

Emma taught me that “slides look better than art”; she devoted my first end-of-session class critique to a personality-review, advising me that I needed to be less quiet and hang out with more of the readily-available freaks. She guest-lectured in other of my courses, advising a late-1980s women-artists-history class to stay in school a few extra years, because “nothin’s happening out there.” Once she assigned us a current issue to express pictorially, and she settled on the Tiananmen Square uprising, mentioning that she’d ruled out race-relations because she worried she was too invested in that, which I felt sad, and was not the only instance of Black faculty removing themselves from the picture in those days. Then again, her own stature in history was secure. She had famously fought her way up through the mostly-white and male-dominated artworld of the 1960s, and spoke to us of the bizarre etiquette between conqueror and survivor, growing up in the segregated South where her respected family would be driving back from somewhere at night and be waved down by a local white sheriff, who’d cordially let them know that a torchlight Klan march would be coming through on the intersection soon, but there’d be no trouble if they just hung back a while. She mentioned playing on the living-room floor as a kid while friend of the family, Nipsey Russell, told dirty jokes to the grownups. She could be maddeningly frivolous (to attendees of classes she clearly and vocally had not wanted to teach), and distressingly insensitive (as with a deaf student I was assigned to transcribe for and she felt dragged her down). She referred me for that first arts-rag job I mentioned, and we were always happy to see each other and compare how we’d most recently turned out. More than almost anyone, Emma was the beneficent, daunting deity who dropped me in at the deep end of who I might be. 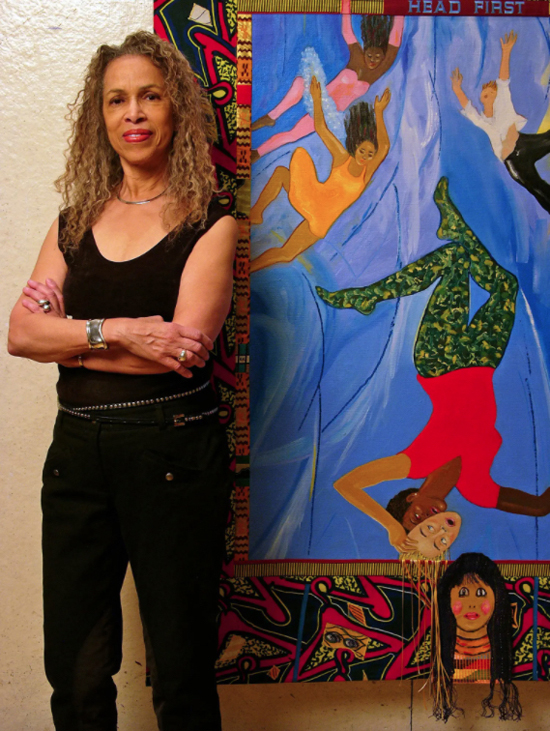 Her signature motif was of bodies in suspension; falling, rising, or spiraling in a void filled with other unmoored signifiers of culture, civilization and existence. The meaning and longevity of things spinning, up for grabs. A descent, from paradise, from ideals we never reached, or pinnacles some were pushed off of, with a long way down but the ground coming toward us fast. It was a defining metaphor of the late-Cold War, neo-segregationist times she started expressing it in; women and people of color’s rights and future in freefall, the clock-hands spinning toward nuclear midnight. Dorothy’s tornado with no Oz and no home; the force that drives us apart and draws us downward while we insist on holding on. These images collided totemically simplified figures with pure abstract arcs of velocity, stylized painting with collaged-in scraps of cloth which conveyed the whirlwind of material and metaphysical states and physical/social debris while decisively gluing down what the inertia of history sought to disperse. The artist’s use of fabric also framed and contextualized her compositions, leaving no surface unactivated and situating her work in textile traditions that ran back through African American history and tethered her legacy to a world that wanted to erase it. These were banners of persistence, tent-flaps and carnival broadsides that were defiantly festive and showed the thin membranes and apertures between cultures that were made to be collaged. 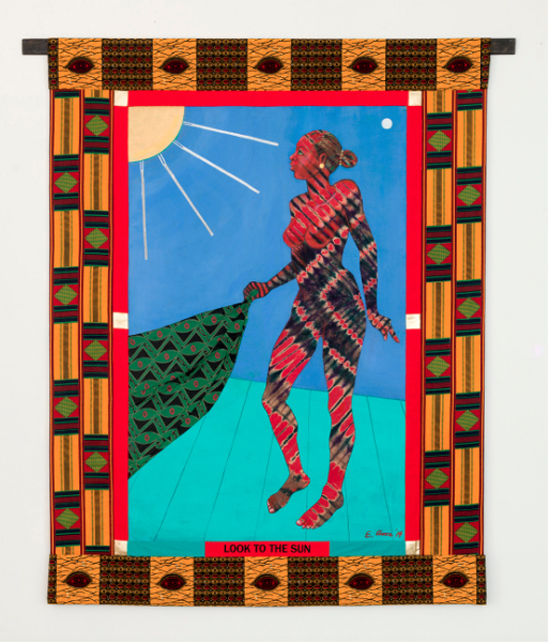 The arcs widen, the pond-rings expand past their own existence, and somehow I only learned 18 months later that she had died, last May. Five years before that I had heard that she’d been struggling with Alzheimer’s, which was the eventual cause. With racism resurgent her work is contemporary, and in climate-change cataclysms the whirlwind is no longer a metaphor. But this world spins on, for now, as Emma’s orbit extends out of sight. Reaching cold distances we can’t conceive of, or breaking through to further suns that she’ll learn of long before I do.