Off-Topic brings you over-the-transom, on-tangent essays, dialogues and subjective scholarship on an occasional, impulsive basis. For this round in our contemporary epoch of embattled realities, some reverence for what is already Marvel’s most disputed mass mythology… 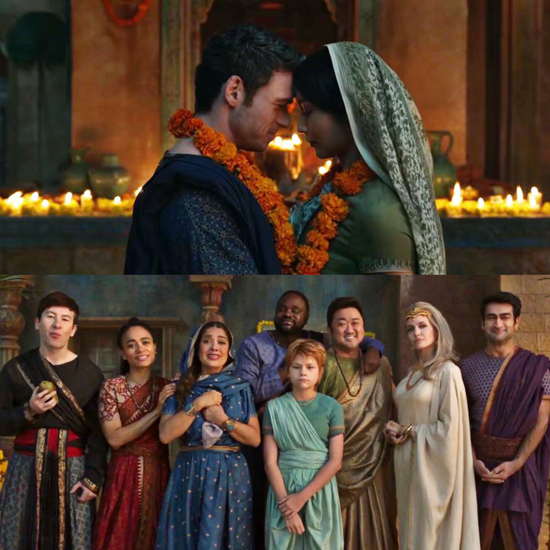 In the beginning was the reboot. All human folklore gets transplanted and recombined, the oldest form of commerce — Mithra’s birthday becomes Jesus’; Greece’s gods show up with Roman names; every culture has a flood story; Orisha mix with saints. The syncretic nature of creativity has been key to both belief systems and popular myths from Mesopotamia to the multiplex. The reboot can seem a recent phenomenon, born of cultural corporations’ need to keep hold of intellectual property and sell you as much as possible of what you’ve already bought — and when it’s calculated and done to formula, that’s all it typically is. But the social need for certain types of ideal figures and aspirational stories, remixed in the associative state of imaginative trances, can bring forth something that’s always been there yet we need like never before. 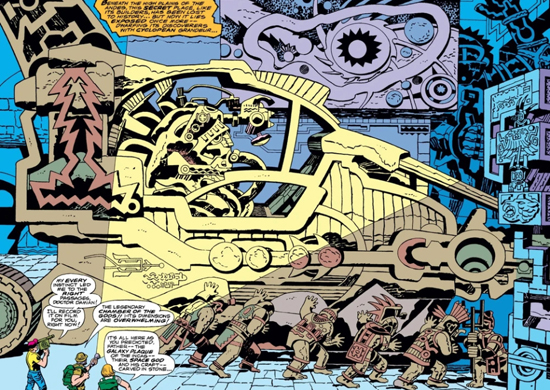 Jack Kirby, his head filled with a supercollision of ancient myth, pulp adventure, epic literature, speculative science journalism and real-life existential struggles (from Dumas to the earliest sci-fi and popular-mechanics mags to his own WWII service), poured out a modern vision of cosmic wonder and operatic peril like a present-day high priest of prophetic narrative. His prophecies come true on the Marvel Cinematic Universe movie screens that have begun to encompass the scope and ambition of his (re)creations. These movies, mostly based on his characters, have taken hold as the international language (or currency, if you prefer) of popular fantasy; a shared epic in which not the champions of the past (cowboys, samurai) but potential future versions of ourselves somehow survive and surpass a tumultuous existence, where natural disasters, scientific calamities and seismic social shifts don’t kill us, but make us superpowered.

Kirby seemed to intuit that a modern era would cycle through its new models of godhood rapidly, at the speed of technological innovation or commercial attention-span; by the late 1960s he had drawn up complete redesigns of characters as classic as Captain America and as recent as Black Panther, and had planned to kill off the entire cast of Thor in a real-stakes Ragnarok which would see them replaced by the characters that only Marvel’s rival DC would later let him do in The New Gods. By the time he returned to Marvel 10 years later, that comic was already revered enough that his old bosses wanted a version of it; this next testament was called The Eternals. 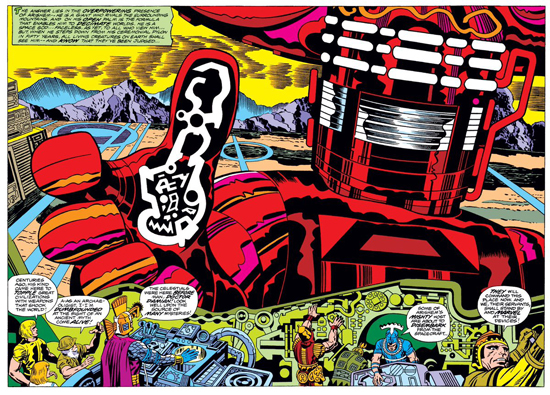 Where New Gods gave Judaic/Biblical types of figures a high-tech upgrade, Eternals remixed and remystified the pseudo-science of then-popular theories about unexplained marvels of the ancient world having been the work of intervening aliens, who were mistaken to be gods. This pre-booted a lot of existing Marvel lore, since Kirby and Stan Lee had long-since established the “real” Norse and Greek gods as part of the company’s universe; but for Kirby, the wheel had turned away from this, which is why he would enjoy the new Eternals movie as much for how it diverges from his version as for how it stays familiar. 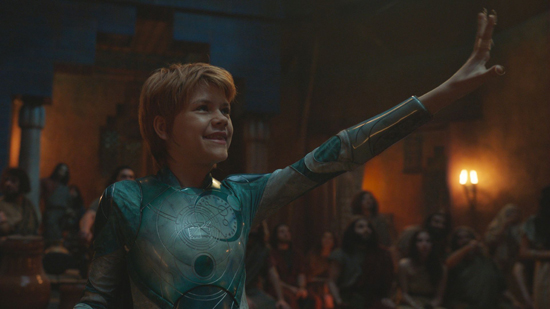 Gods are refractions, be it Athena/Minerva or Jehovah/Yahweh/Allah, and Chloé Zhao’s Eternals is the next vision through the prism. Zhao’s penchant for panorama serves the sprawling story well, and mirrors Kirby’s famous double-page single images, though Kirby’s were about spectacle while Zhao’s are about stillness; both inspire awe. In the typical MCU flick you are thrilled to be flung from one corner of the world to the next as international intrigues or global threats play out; in Eternals you can feel the grand turning of the Earth. 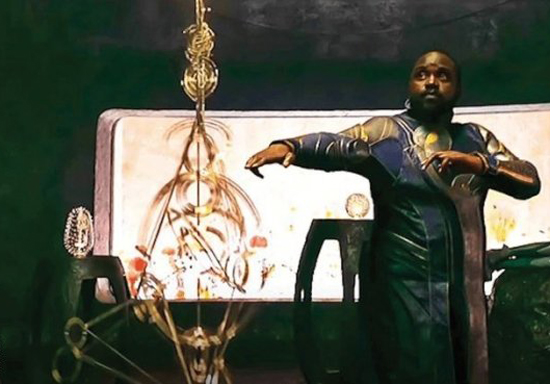 This is not to say that anything feels static; there is a lightness to Zhao’s aesthetic that matches elegance with agility, as in the designs of the Eternals’ costumes and the visualization of their powers. Kirby drew inspiration extensively from Aztec carvings and Kabbalistic tree-of-life imagery, while the movie Eternals’ clothing looks like star charts effigied in fabric, and their abilities manifest like matter woven from light. The sensibilities intersect in the kind of spiritual circuitry that glows into life from the MCU Eternals’ skin when they are called to action or divine feats; simultaneously cosmic and totemic systems were at the core of Kirby’s style too.

Kirby depicted a wide range of gender and race amongst the Eternals (albeit mostly in walk-ons and crowd-scenes for the latter), so the global nature of the cinematic cast’s makeup carries his concepts forth in a logical and necessary way. The rooting of the Eternals comic’s narrative in (unconscious?) templates of uber and untermenschen (the Eternals and “Deviants,” respectively), was one of its failings, though as his run progressed Kirby himself undermined this binary, so the film’s further skepticism about the perfection of the protagonists and the purity of their mission is both a thoughtful reimagining and a faithful progression. 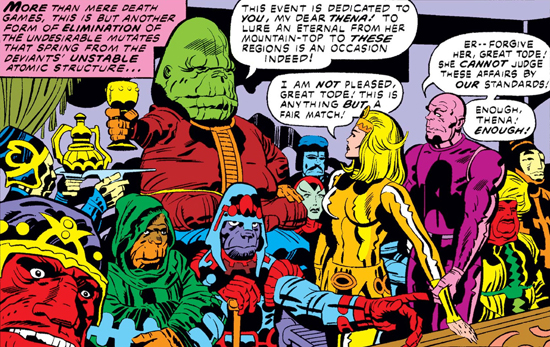 Having established its autonomy from as well as indebtedness to its creator, the movie in its own right feels game-changing and genre-changing in a way comparable to Ryan Coogler’s Black Panther. As Black Panther surpassed superhero cinema to be a kind of sociological thriller, Eternals’ characters are not so much a superhero team as a pantheon without portfolio, a crew of epic heroes in the most difficult kind of quest, through an indifferent and unknowing present. 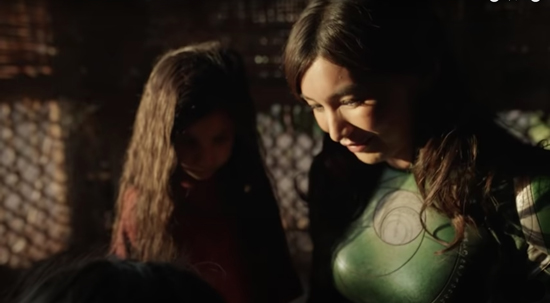 The pendulum structure of the storyline, leaning forward and back in time, is ideal for putting pieces of the mosaic together in a way which can both build suspense and fast-forward to action, as well as make later revelations seem earned and flashbacks to them uncontrived. The mechanisms of the plot’s devices are precisely assembled, with premises (like the ways the Eternals’ and Celestials’ consciousnesses can connect and their powers pool) set up in ways that sooner and later click into place like one of the well-calibrated clockworks we see Phastos fashion throughout the film. The only two stretches of exposition, delivered by the prime Celestial Arishem, feel natural due to the Old Testament quality of his characterization, his proclaiming speech-patterns and commanding form of address toward his prophets Ajak and Sersi. The only MCU movie that begins with a brief text roll redeems this too in due course, by showing us how unreliable this scripture can be.

And though the Word comes first, in movies as in comics what matters most is what you witness. The much-talked-about introduction of the MCU’s first unequivocally gay big-screen hero and his family is also the least remarked-on; Phastos’ home life, the substance of the husbands’ bond and soundness of their parenthood and naturalness of their onscreen kiss, is only revolutionary in context; to Zhao these markers of everyday humanity are nothing special, while the decent, deserving and unapologetic people involved in them are. Just as important is the sense that no limited allotment of queerness (or any variation of human identity) is being dispensed with; Kumail Nanjiani’s unattached Kingo is clearly gay while neither having any occasion to mention it nor being subject to any coded camouflaging of it, and the tender caretaker relationship between Gilgamesh and Thena is loving while to all appearances asexual, another big (if unspoken) taboo in commercial Hollywood. Druig’s interactions suggest autism-spectrum variations of physical affection. And indeed, the film’s normative male-female relationships are uncommonly mature, equal and unashamed. Mass entertainment is still taking its baby steps in doing this, but Zhao knows how to make many people feel seen, without thinking they need to be told what she’s doing.

In this context, personalities flourish and are memorably distinct (no small achievement with a broad ensemble who are all new to most viewers). As Makkari Lauren Ridloff conveys vivid emotion and human drama at an almost cortical level, her expressions and movement telling a story which scarcely has need of the subtitles for the ASL she otherwise communicates in. Angelina Jolie’s otherworldly performance as Thena, intense yet distant, manages the rare accomplishment of being textured and genuinely enigmatic without being just aloof and opaque. Don Lee as Gilgamesh is a classic paradigm of the happy warrior holding a lifetime of hurt; Gemma Chan as Sersi walks a subtle balance of angelic impulse and tortured uncertainty. Salma Hayek as Ajak is serenely magisterial, a matriarch of generosity and wrath; Bryan Tyree Henry as Phastos has a heartbreaking conviction and unshakable grounding. Barry Keoghan lends meaningful dimension to the Hades/serpent figure Druig, with good reason to doubt his gods, his peers and their mission; as the immortally young and never fulfilled Sprite, Lia McHugh embodies many conflicting layers and joins the annals of truly phenomenal teen actors. 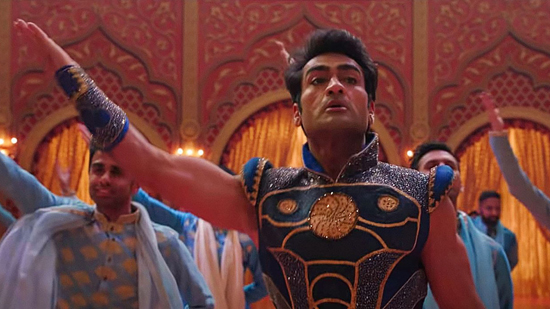 As Kingo, who hides his superhumanity in plain sight as a Bollywood action icon, Nanjiani generates much of the film’s best humor, and can pivot to poignancy like a latter-day James Garner. His quick wit and surprising depth are a valuable offset for the dumbest power of any Eternal; among the legendary-weapons-wielding, matter-transmutation, elaborate illusion-creation, etc., Kingo…shoots balls of energy from his hands. But this too is in keeping with the Eternals’ nature as epitomes and archetypes; in his abilities Kingo is the personification not of ancient-warrior tropes but of the action-hero cliché, all the better to deflect from his many actual layers.

It’s not the only meta self-commentary from this groundbreaking superhero flick. As Ikaris, the kind of uncomplicated paragon character who would have been the lead in an older movie of this kind, and is definitely mournful of such heroism in the same way that Kingo is sarcastic, Richard Madden gets compared to Clark Kent a few times, and is in fact the perfect Scary Superman figure (scarier than Henry Cavill in the two versions of Justice League, since Ikaris knows what he’s doing). In the dispute among the Eternals over self-determination and the validity of their faith, and in the context of this cast, Ikaris is the twilight whiteguy, who can’t see beyond the structures he was created and socialized to fit, and will bring any alternate one down with him and you in it. (It’s telling that his signature power, deadly beams shot from his eyes, is the opposite of seeing with them; observation reversed as attack.) 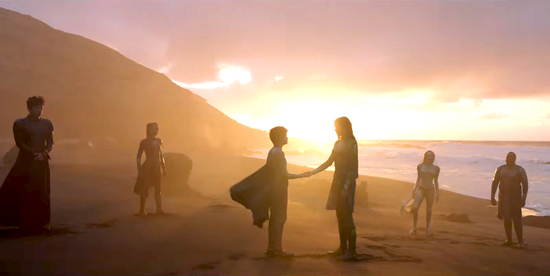 It was a strange feeling to see this film in the same week that Congressional Democrats were internally (though very publicly) warring on priorities as the clock ticked on bills that could change lives and heal some of the planet’s injuries. It seemed one of those odd moments of life paralleling art in ways that couldn’t have been foreseen, with ostensible goodguys both on the movie-screen and in the news fighting themselves over the right way to do the right thing. It helped me relate to everyone’s position in the real-life setting, while not stopping me from rooting for a particular outcome. Sersi may be the moral center of this movie, but each character is part of a constellation; everyone in Eternals has a reason for what they do and what makes it important to them. There are no absolute heroes or villains, but a lot of important choices. In the MCU and in our imperiled real-world democracy and ecosystem, it’s a constellation I hope I can look forward to journeying further in.