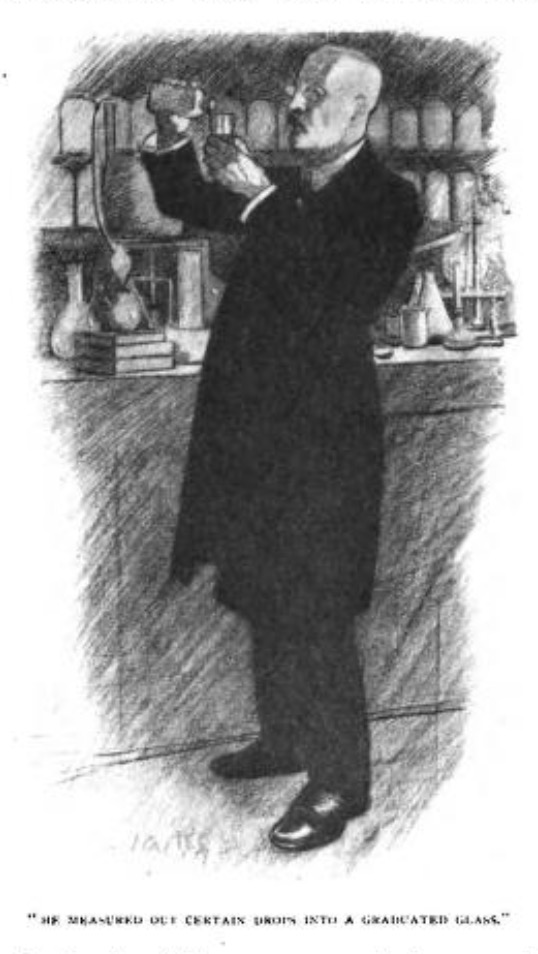 The doctor went to a long laboratory bench with bottle-filled shelves above it, and on it crucibles and retorts, test tubes, beakers — all a chemist’s apparatus — reached a bottle from a shelf, and measured out certain drops into a graduated glass, added water, and stirred it with a glass rod.

“No,” said Roger, and as he spoke a thrill like the first thrill of the first chloroform wave swept through him, and it was a thrill, not of pleasure, but of pain. “No,” he said, and “Ah!” for the pain was sharp.

“If you don’t drink,” said the doctor carefully, “you are a dead man.”

“You may be giving me poison,” Roger gasped, his hands at his heart.

Every nerve, every muscle thrilled to a pain not too intense to be underlined by a shuddering nausea. “Like death,” he said again.

“Then drink,” cried the doctor, in tones of such cordial entreaty, such evident anxiety, that Wroxham half held his hand out for the glass. “Drink! Believe me, it is your only chance.”

Again the pain swept through him like an electric current. The beads of sweat sprang out on his forehead.

“That wound,” the doctor pleaded, standing over him with the glass held out. “For Heaven’s sake, drink! Don’t you understand, man? You are poisoned. Your wound ——”

“The knife?” Wroxham murmured, and as he spoke his eyes seemed to swell in his head, and his head itself to grow enormous. “Do you know the poison — and its antidote?”

As the pain caught him again in a clasp more close than any lover’s he clutched at the glass and drank. The drug met the pain and mastered it. Roger, in the ecstasy of pain’s cessation, saw the world fade and go out in a haze of vivid violet.

Faint films of lassitude shot with contentment wrapped him round. He lay passive as a man lies in the convalescence that follows a long fight with Death.

“I’m better now,” he said, in a voice that was a whisper — tried to raise his hand from where it lay helpless in his sight, failed, and lay looking at it in confident repose — “much better.”

“Yes,” said the doctor, and his pleasant, soft voice had grown softer, pleasanter. “You are now in the second stage. An interval is necessary before you can pass to the third. I will enliven the interval by conversation. Is there anything you would like to know?”

“Nothing,” said Roger; “I am quite happy — quite contented.”

“This is very interesting,” said the doctor. “Tell me exactly how you feel.”

Roger faintly and slowly told him.

“Ah!” the doctor said, “I have not before heard this. You are the only one of them all who ever passed the first stage. The others ——”

“The others?” said Roger, but he did not care much about the others.

“The others,” said the doctor, frowning, “were unsound. Decadent students, degenerate Apaches. You are highly trained — in fine physical condition. And your brain! The Lord be good to the Apaches who so delicately excited it to just the degree of activity needed for my purpose.”

“The others?” Wroxham insisted.

“The others? They are in the room whose door was locked. Look — you should be able to see them. The second drug should lay your consciousness before me like a sheet of white paper on which I can write what I choose. If I choose that you should see my specimens —— Allons donc. I have no secrets from you now. Look look — strain your eyes. In theory I know all that you can do and feel and see in this second stage. But practically —— Enlighten me — look — shut your eyes and look!”

Roger closed his eyes and looked. He saw the gaunt, uncarpeted staircase, the open doors of the big rooms, passed to the locked door, and it opened at his touch. The room inside was, like the other, spacious and paneled. A lighted lamp with a blue shade hung from the ceiling, and below it an effect of spread whiteness. Roger looked. There were things to be seen.