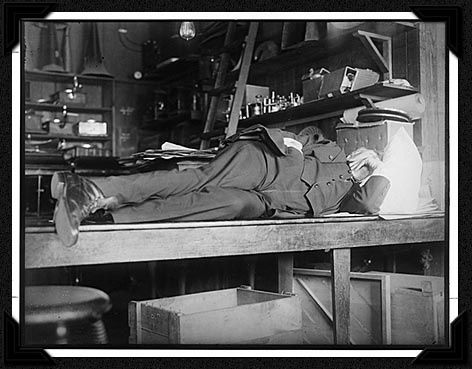 Thomas Edison napping in his laboratory.

Roger had been thinking, the old common sense that guides an ordinary man breaking through this consciousness of illimitable wisdom. “You had better,” he said, “unbind me; when the hand of Death sweeps your nerves you may need help.”

And then suddenly and irresistibly the pain caught him. Roger saw his face contorted with agony, his hands clench on the arm of his chair; and it seemed that either this man was less able to bear pain than he, or that the pain was much more violent than had been his own. And the plump, pale hand, writhing and distorted by anguish, again and again drew near to take the glass that stood ready on the table, and with convulsive self-restraint again and again drew back without it.

The short May night was waning — the shiver of dawn rustled the leaves of the plant whose leaves were like red misshaped hearts.

“Now!” The doctor screamed the word, grasped the glass, drained it, and sank back in his chair. His hand struck the table beside him. Looking at his limp body and head thrown back one could almost see the cessation of pain, the coming of kind oblivion.

The dawn had grown to daylight, a poor, grey, rain-stained daylight, not strong enough to pierce the curtains and persiennes, and yet not so weak but that it could mock the lamp, now burnt low and smelling vilely.

Roger lay very still on his couch, a man wounded, anxious, and extravagantly tired. In those hours of long, slow dawning, face to face with the unconscious figure in the chair, he had felt, slowly and little by little, the recession of that sea of knowledge on which he had felt himself float in such large content. The sea had withdrawn itself, leaving him high and dry on the shore of the normal. The only relic that he had clung to and that he still grasped was the answer to the problem of the trouble — the only wisdom that he had put into words. These words remained to him, and he knew that they held wisdom — very simple wisdom, too.

“To end the trouble I must do so-and-so and say such-and-such.”

Slowly a dampness spread itself over Wroxham’s forehead and tingled among the roots of his hair. He writhed in his bonds. They held fast. He could not move hand or foot. Only his head could turn a little, so that he could at will see the doctor or not see him. A shaft of desolate light pierced the persienne at its hinge and rested on the table, where an overturned glass lay.

Wroxham thrilled from head to foot. The body in the chair stirred — hardly stirred — shivered, rather — and a very faint, far-away voice said:—

“What?” said Roger, stupidly; and he had to clear his throat twice before he could say even that.

“The moment is now,” said the doctor. “I remember all. I made you a god. Give me the third drug.”

“Where is it?” Roger asked.

“It is at my elbow,” the doctor murmured. “I submit — I submit. Give me the third drug, and let me be as you are.”

“Break your bonds,” the doctor urged, in a quick, small voice. “I trust you now. You are stronger than all men, as you are wiser. Stretch your muscles, and the bandages will fall asunder like snow-wreaths.”

“It is too late,” Wroxham said, and laughed; “all that is over. I am not wise any more, and I have only the strength of a man. I am tired and wounded. I cannot break my bonds — I cannot help you!”

“But if you cannot help me — it is death,” said the doctor.

“I feel life returning,” said the doctor, “it is now the moment — the one possible moment. And I cannot reach it. Oh, give it me — give it me!”

Then Roger cried out suddenly, in a loud voice: “Now, by all that’s sacred, you infernal decadent, I am glad that I cannot give it. Yes, if it costs me my life, it’s worth it, you madman, so that your life ends too. Now be silent, and die like a man if you have it in you.”

Roger lay and watched him, and presently he writhed from the chair to the floor, tearing feebly at it with his fingers, moaned, shuddered, and lay very still.

Of all that befell Roger in that house the worst was now. For now he knew that he was alone with the dead, and between him and death stretched certain hours and days. For the porte cochère was locked; the doors of the house itself were locked — heavy doors and the locks new.