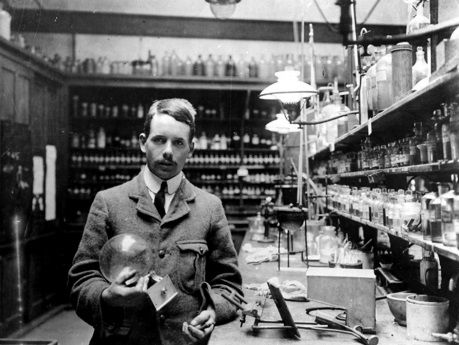 Roger Wroxham looked round his studio before he blew out the candle, and wondered whether, perhaps, he looked for the last time. It was large and empty, yet his trouble had filled it and, pressing against him in the prison of those four walls, forced him out into the world, where lights and voices and the presence of other men should give him room to draw back, to set a space between it and him, to decide whether he would ever face it again — he and it alone together. The nature of his trouble is not germane to this story. There was a woman in it, of course, and money, and a friend, and regrets and embarrassments — and all of these reached out tendrils that wove and interwove till they made a puzzle problem of which heart and brain were now weary.

He blew out the candle and went quietly downstairs. It was nine at night, a soft night of May in Paris. Where should he go? He thought of the Seine, and took — an omnibus. When at last it stopped he got off, and so strange was the place to him that it almost seemed as though the trouble itself had been left behind. He did not feel it in the length of three or four streets that he traversed slowly. But in the open space, very light and lively, where he recognised the Taverne de Paris and knew himself in Montmartre, the trouble set its teeth in his heart again, and he broke away from the lamps and the talk to struggle with it in the dark, quiet streets beyond.

A man braced for such a fight has little thought to spare for the details of his surroundings. The next thing that Wroxham knew of the outside world was the fact which he had known for some time that he was not alone in the street. There was someone on the other side of the road keeping pace with him — yes, certainly keeping pace, for, as he slackened his own, the feet on the other pavement also went more slowly. And now they were four feet, not two. Where had the other man sprung from? He had not been there a moment ago. And now, from an archway a little ahead of him, a third man came.

Wroxham stopped. Then three men converged upon him, and, like a sudden magic-lantern picture on a sheet prepared, there came to him all that he had heard and read of Montmartre — dark archways, knives, Apaches, and men who went away from homes where they were beloved and never again returned. He, too — well, if he never returned again, it would be quicker than the Seine, and, in the event of ultramundane possibilities, safer.

He stood still and laughed in the face of the man who first reached him.

“Well, my friend?” said he; and at that the other two drew close.

“Monsieur walks late,” said the first, a little confused, as it seemed, by that laugh.

“And will walk still later if it pleases him,” said Roger. “Good night, my friends.”

“Ah!” said the second, “friends do not say adieu so quickly. Monsieur will tell us the hour.”

“I have not a watch,” said Roger, quite truthfully.

“I will assist you to search for it,” said the third man, and laid a hand on his arm.

Roger threw it off. The man with the hand staggered back.

“No, no,” said the third, quickly; “he is too heavy. I for one will not carry him afterwards.”

They closed round him, hustling him between them. Their pale, degenerate faces spun and swung round him in the struggle. For there was a struggle. He had not meant that there should be a struggle. Someone would hear — someone would come.

But if any heard none came. The street retained its empty silence; the houses, masked in close shutters, kept their reserve. The four were wrestling, all pressed close together in a writhing bunch, drawing breath hardly through set teeth, their feet slipping and not slipping on the rounded cobble-stones.

The contact with these creatures, the smell of them, and the warm, greasy texture of their flesh as, in the conflict, his face or neck met neck or face of theirs — Roger felt a cold rage possess him. He wrung two clammy hands apart and threw something off — something that staggered back clattering, fell in the gutter, and lay there.