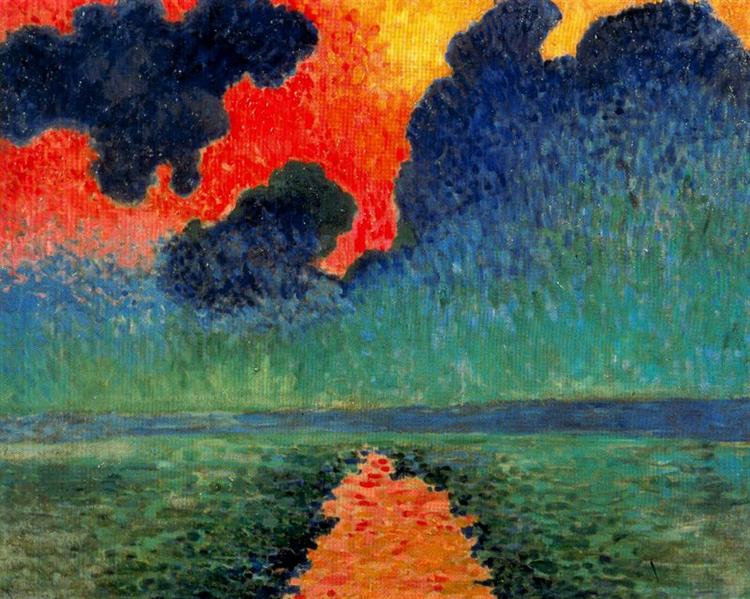 “I’m getting tired,” complained Davis, lounging in the window of the Physics Building, “and sleepy. It’s after eleven o’clock. This makes the fourth night I’ve sat up to see your new star, and it’ll be the last. Why, the thing was billed to appear three weeks ago.”

“Are you tired, Miss Wardour?” asked Eastwood, and the girl glanced up with a quick flush and a negative murmur.

Eastwood made the reflection anew that she certainly was painfully shy. She was almost as plain as she was shy, though her hair had an unusual beauty of its own, fine as silk and coloured like palest flame.

Probably she had brains; Eastwood had seen her reading some extremely “deep” books, but she seemed to have no amusements, few interests. She worked daily at the Art Students’ League, and boarded where he did, and he had thus come to ask her with the Davis’s to watch for the new star from the laboratory windows on the Heights.

“Do you really think that it’s worthwhile to wait any longer, professor?” enquired Mrs Davis, concealing a yawn.

Eastwood was somewhat annoyed by the continued failure of the star to show itself and he hated to be called “professor,” being only an assistant professor of physics.

“I don’t know,” he answered somewhat curtly. “This is the twelfth night that I have waited for it. Of course, it would have been a mathematical miracle if astronomers should have solved such a problem exactly, though they’ve been figuring on it for a quarter of a century.”

The new Physics Building of Columbia University was about twelve storeys high. The physics laboratory occupied the ninth and tenth floors, with the astronomical rooms above it, an arrangement which would have been impossible before the invention of the oil vibration cushion, which practically isolated the instrument rooms from the earth.

Eastwood had arranged a small telescope at the window, and below them spread the illuminated map of Greater New York, sending up a faintly musical roar. All the streets were crowded, as they had been every night since the fifth of the month, when the great new star, or sun, was expected to come into view.

Some error had been made in the calculations, though, as Eastwood said, astronomers had been figuring on them for twenty-five years.

It was, in fact, nearly forty years since Professor Adolphe Bernier first announced his theory of a limited universe at the International Congress of Sciences in Paris, where it was counted as little more than a masterpiece of imagination.

Professor Bernier did not believe that the universe was infinite. Somewhere, he argued, the universe must have a centre, which is the pivot for its revolution.

Somewhere there must be a central sun, a vast incandescent body which does not move at all. And as a sun is always larger and hotter than its satellites, therefore the body at the centre of the universe must be of an immensity and temperature beyond anything known or imagined.

It was objected that this hypothetical body should then be large enough to be visible from the earth, and Professor Bernier replied that some day it undoubtedly would be visible. Its light had simply not yet had time to reach the earth.

The passage of light from the nearest of the fixed stars is a matter of three years, and there must be many stars so distant that their rays have not yet reached us. The great central sun must be so inconceivably remote that perhaps hundreds, perhaps thousands of years would elapse before its light should burst upon the solar system.

All this was contemptuously classed as “newspaper science” till the extraordinary mathematical revival a little after the middle of the twentieth century afforded the means of verifying it.

Following the new theorems discovered by Professor Burnside, of Princeton, and elaborated by Dr. Taneka, of Tokyo, astronomers succeeded in calculating the arc of the sun’s movements through space, and its ratio to the orbit of its satellites. With this as a basis, it was possible to follow the widening circles, the consecutive systems of the heavenly bodies and their rotations.

The theory of Professor Bernier was justified. It was demonstrated that there really was a gigantic mass of incandescent matter, which, whether the central point of the universe or not, appeared to be without motion.