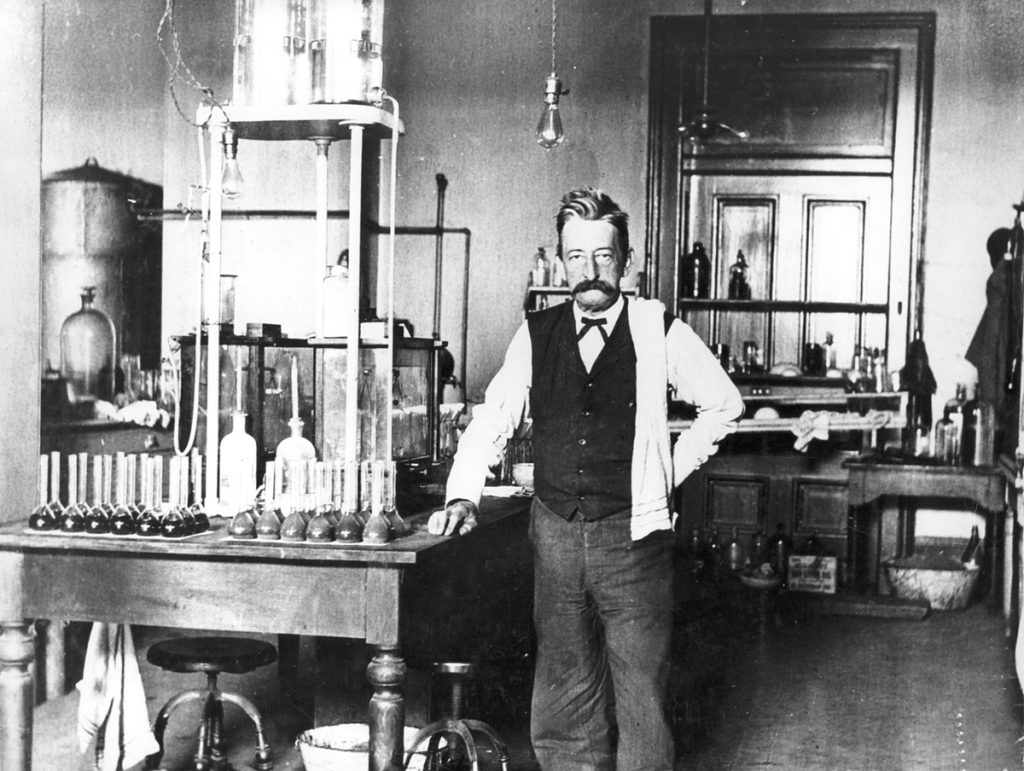 “For God’s sake, no!” the doctor cried; “the time is so near. If you cease to submit it is death.”

With an incredible accelerated swiftness he swept the bandages round and round knees and ankles, drew a deep breath — stood upright.

“I must make an incision,” he said — “in the head this time. It will not hurt. See! I spray it with the Constantia Nepenthe; that also I discovered. My boy, in a moment you know all things — you are as a god. Be patient. Preserve your submission.”

And Roger, with life and will resurgent hammering at his heart, preserved it.

He did not feel the knife that made the cross cut on his temple, but he felt the hot spurt of blood that followed the cut, he felt the cool flap of a plaster spread with some sweet, clean smelling unguent that met the blood and stanched it. There was a moment – or was it hours? – of nothingness. Then from that cut on his forehead there seemed to radiate threads of infinite length, and of a strength that one could trust to – threads that linked one to all knowledge past and present. He felt that he controlled all wisdom, as a driver controls his four-in-hand. Knowledge he perceived, belonged to him, as the air belongs to the eagle. He swam in it, as great fish in a limitless ocean.

He opened his eyes and met those of the doctor, who sighed as one to whom breath has grown difficult.

“I. Know. Everything,” said Roger, with full stops between the words.

“No. I know all that man has ever known.”

“Look back — into the past. See someone. See Pharaoh. You see him — on his throne?”

“Not on his throne. He is whispering in a corner of his great gardens to a girl who is the daughter of a water-carrier.”

“Bah! Any poet of my dozen decadents who lie so still could have told me that. Tell me secrets — the Masque de Fer.”

The other told a tale, wild and incredible, but it satisfied the listener.

“That too — it might be imagination. Tell me the name of the woman I loved and —”

The echo of the name of the anesthetic came to Roger; “Constantia,” said he, in an even voice.

“Ah,” the doctor cried, “now I see you know all things. It was not murder. I hoped to dower her with all the splendors of the superlife.”

“Her bones lie under the lilacs, where you used to kiss her in the spring,” said Roger, quite without knowing what it was that he was going to say.

“It is enough,” the doctor cried. He sprang up, ranged certain bottles and glasses on a table convenient to his chair. “You know all things. It was not a dream, this, the dream of my life. It is true. It is a fact accomplished. Now I, too, will know all things. I will be as the gods.”

He sought among leather cases on a far table and came back swiftly into the circle of light that lay below the green-shaded lamp.

Roger, floating contentedly on the new sea of knowledge that seemed to support him, turned eyes on the trouble that had driven him out of that large, empty studio so long ago, so far away. His new-found wisdom laughed at that problem, laughed and solved it. “To end that trouble I must do so-and-so, say such-and-such,” Roger told himself again and again.

And now the doctor, standing by the table, laid on it his pale, plump hand outspread. He drew a knife from a case — a long, shiny knife — and scored his hand across and across its back, as a cook scores pork for cooking. The slow blood followed the cuts in beads and lines.

Into the cuts he dropped a green liquid from a little bottle, replaced its stopper, bound up his hand, and sat down.

“The beginning of the first stage,” he said; “almost at once I shall begin to be a new man. It will work quickly. My body, like yours, is sane and healthy.”

There was a long silence.

“Oh, but this is good,” the doctor broke it to say. “I feel the hand of Life sweeping my nerves like harp-strings.”