Off-Topic brings you over-the-transom, on-tangent essays, dialogues and subjective scholarship on an occasional, impulsive basis. In this case, a commemoration of once more putting places to names, and the firsthand experience of the back-in-contact and the unretouched… 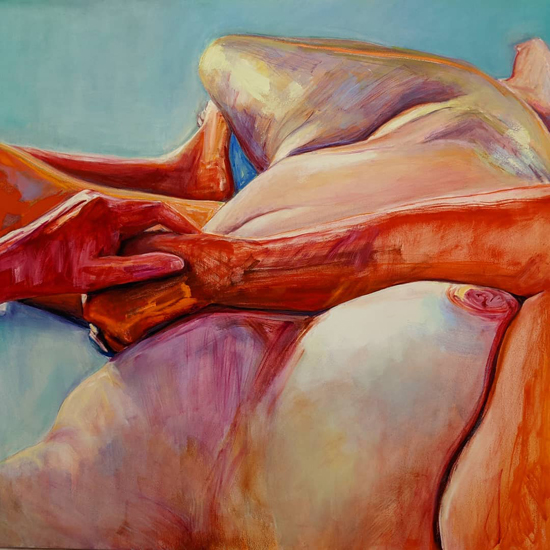 Surfaces are underrated. The walls of brick, the skin of a stranger, these membranes between our sense of self and confirmation of our (and others’) existence, were rendered intangible by pandemic distance; even a painting could only be a picture of a picture, with people themselves transmuted to an image on a screen. The veils are pulling back and the layers are reaccumulating, which made Joan Semmel’s latest exhibition a fitting return to physical spaces and reacquaintance with the rest of the senses.

The presence of paint, assertive of its tactile reality as pure texture and color, and the personality of the subjects Semmel resolves it into, and the third experience that hovers between the two, crossing the dimensions of perception and expression, is like the skin of a living thing and the spiritual light that suffuses it. 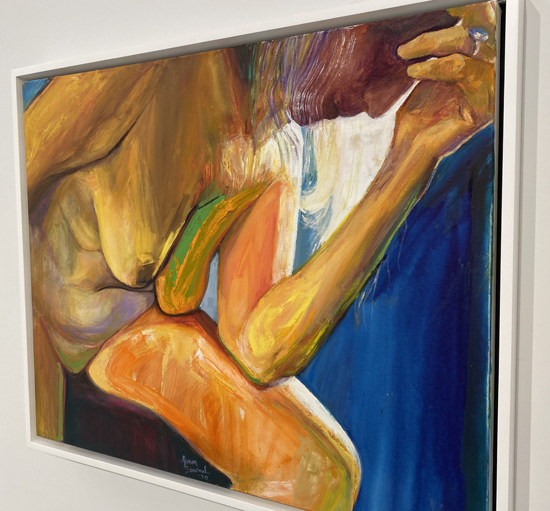 The ritual referent is more relevant than I at first realized, when my friend Julia Lee Barclay-Morton recognized a number of these anatomical portraits as yoga positions. Semmel’s borealis palette seems to transmit the pure visual spectrum, a higher frequency with the body as prism. And yet the natural paths the paint will take, dripping down the canvas, thickening with many marks and wearing through to the bare foundation, manifest the texture of real bodies through time, a viscerally observed likeness of how it feels to exist.

Semmel’s figure studies have always been inclusive, her self-portraits placing the viewer’s vantage at her own point of view; the identification, the sense of self-ness, shared in these latest paintings is a new magnitude and intensification of this. 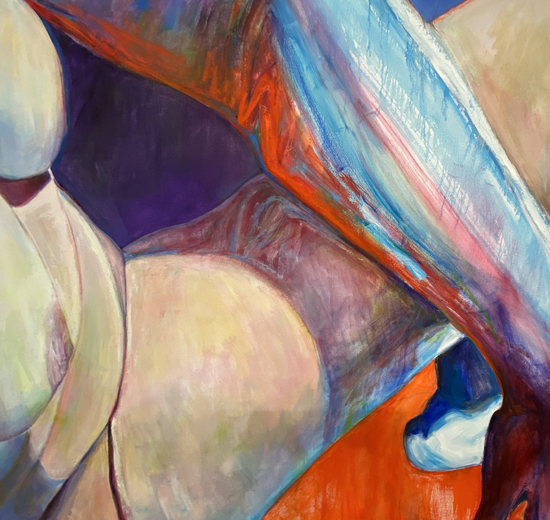 Lyrical lightness, pastel ephemerality, and bravura neon gestures and buildups fluctuate across the canvases in an astonishing interplay of intent and intuition. The blank canvas beneath all these layers asserts itself as emphasis or illumination, like the white room of highest consciousness, the blazing world that Medieval Europe believed was behind the shell of the sky. Yet for all the compositional mastery with which Semmel weaves a pictorial system from a lifetime of disparate techniques — her repertoire of painting’s axiomatic illusions, with passages of pure abstraction and negative spaces like perfectly laid stained glass panes — the depth of the scene, the volumes of the figures and the believability of the grounds they rest on, however minimally rendered, feel emphatically real. 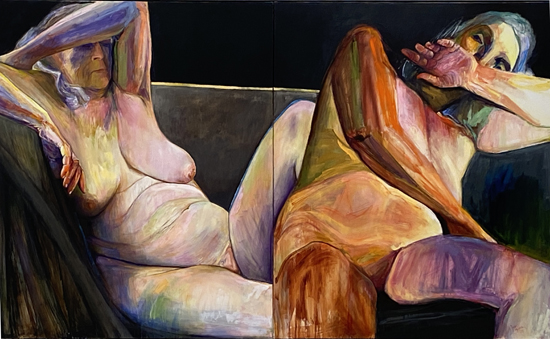 Semmel’s work makes me reflect on this culture’s disconnect between exposure and honesty. Her images were always intended as a kind of disputation of pornography, its smooth surfaces and irrational ideals as much as its absence of female subjectivity or mutual feeling; all display and no revelation. Semmel instead records the insistent reality of women’s bodies, the biography of her own. That story writes itself regardless of what you or others want, and Semmel’s work accepts it, and you.

In the process, she reserves a measure of privacy which can still seem a surprising contrast to the nude image as we’ve been trained to conceive it. Her face is shadowed, or covered, or partial, or entirely outside the frame as in her earliest well-known work; even as she has re-entered the visible field since that phase, much will remain undisclosed. In the monumentally enigmatic Couch Diptych, two sides of Semmel’s self each cover a different half of their face; a kind of figural yin-yang, a verité playing-card double image, a new portraiture for the era of internet invasiveness and pandemic-masked partial recognition.

In the hands of an artist like Joan Semmel, some surfaces are all substance.

The show runs at Alexander Gray Associates’ two galleries through June 12 (Manhattan) and June 20 (Germantown, NY); each has been extended so check for dates.