IMPRISONED WITH THE PHARAOHS (11) 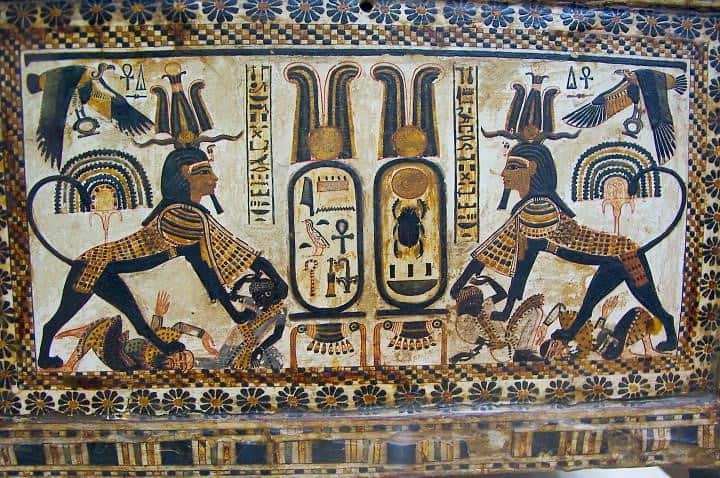 And now, as I steeled myself to watch the rapt and sepulchral adorations of those nameless things, a thought of escape flashed upon me. The hall was dim, and the columns heavy with shadow. With every creature of that nightmare throng absorbed in shocking raptures, it might be barely possible for me to creep past to the far-away end of one of the staircases and ascend unseen; trusting to Fate and skill to deliver me from the upper reaches. Where I was, I neither knew nor seriously reflected upon — and for a moment it struck me as amusing to plan a serious escape from that which I knew to be a dream. Was I in some hidden and unsuspected lower realm of Khephren’s gateway temple — that temple which generations have persistently called the Temple of the Sphinx? I could not conjecture, but I resolved to ascend to life and consciousness if wit and muscle could carry me.

Wriggling flat on my stomach, I began the anxious journey toward the foot of the lefthand staircase, which seemed the more accessible of the two. I cannot describe the incidents and sensations of that crawl, but they may be guessed when one reflects on what I had to watch steadily in that malign, wind-blown torchlight in order to avoid detection. The bottom of the staircase was, as I have said, far away in shadow, as it had to be to rise without a bend to the dizzy parapeted landing above the titanic aperture. This placed the last stages of my crawl at some distance from the noisome herd, though the spectacle chilled me even when quite remote at my right.

At length I succeeded in reaching the steps and began to climb; keeping close to the wall, on which I observed decorations of the most hideous sort, and relying for safety on the absorbed, ecstatic interest with which the monstrosities watched the foul-breezed aperture and the impious objects of nourishment they had flung on the pavement before it. Though the staircase was huge and steep, fashioned of vast porphyry blocks as if for the feet of a giant, the ascent seemed virtually interminable. Dread of discovery and the pain which renewed exercise had brought to my wounds combined to make that upward crawl a thing of agonizing memory. I had intended, on reaching the landing, to climb immediately onward along whatever upper staircase might mount from there; stopping for no last look at the carrion abominations that pawed and genuflected some seventy or eighty feet below — yet a sudden repetition of that thunderous corpse-gurgle and deathrattle chorus, coming as I had nearly gained the top of the flight and showing by its ceremonial rhythm that it was not an alarm of my discovery, caused me to pause and peer cautiously over the parapet.

The monstrosities were hailing something which had poked itself out of the nauseous aperture to seize the hellish fare proffered it. It was something quite ponderous, even as seen from my height; something yellowish and hairy, and endowed with a sort of nervous motion. It was as large, perhaps, as a good-sized hippopotamus, but very curiously shaped. It seemed to have no neck, but five separate shaggy heads springing in a row from a roughly cylindrical trunk; the first very small, the second good-sized, the third and fourth equal and largest of all, and the fifth rather small, though not so small as the first.

Out of these heads darted curious rigid tentacles which seized ravenously on the excessively great quantities of unmentionable food placed before the aperture. Once in a while the thing would leap up, and occasionally it would retreat into its den in a very odd manner. Its locomotion was so inexplicable that I stared in fascination, wishing it would emerge farther from the cavernous lair beneath me.

Then it did emerge… it did emerge, and at the sight I turned and fled into the darkness up the higher staircase that rose behind me; fled unknowingly up incredible steps and ladders and inclined planes to which no human sight or logic guided me, and which I must ever relegate to the world of dreams for want of any confirmation. It must have been a dream, or the dawn would never have found me breathing on the sands of Gizeh before the sardonic dawn-flushed face of the Great Sphinx.

The Great Sphinx! God! — that idle question I asked myself on that sun-blest morning before… what huge and loathsome abnormality was the Sphinx originally carven to represent? Accursed is the sight, be it in dream or not, that revealed to me the supreme horror — the unknown God of the Dead, which licks its colossal chops in the unsuspected abyss, fed hideous morsels by soulless absurdities that should not exist. The five-headed monster that emerged… that five-headed monster as large as a hippopotamus… the five-headed monster — and that of which it is the merest forepaw….

But I survived, and I know it was only a dream.