IMPRISONED WITH THE PHARAOHS (10) 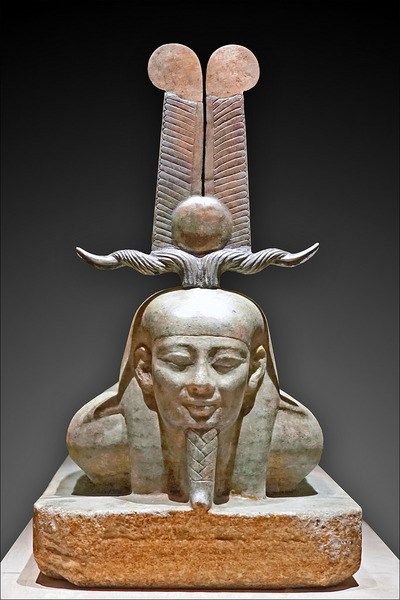 It was hideous that footfalls so dissimilar should move in such perfect rhythm. The training of unhallowed thousands of years must lie behind that march of earth’s inmost monstrosities…. padding, clicking, walking, stalking, rumbling, lumbering, crawling…. and all to the abhorrent discords of those mocking instruments. And then — God keep the memory of those Arab legends out of my head! — the mummies without souls… the meeting-place of the wandering kas… the hordes of the devil-cursed pharaonic dead of forty centuries… the composite mummies led through the uttermost onyx voids by King Khephren and his ghoul-queen Nitocris….

The tramping drew nearer — Heaven save me from the sound of those feet and paws and hooves and pads and talons as it commenced to acquire detail! Down limitless reaches of sunless pavement a spark of light flickered in the malodorous wind and I drew behind the enormous circumference of a Cyclopic column that I might escape for a while the horror that was stalking million-footed toward me through gigantic hypostyles of inhuman dread and phobic antiquity. The flickers increased, and the tramping and dissonant rhythm grew sickeningly loud. In the quivering orange light there stood faintly forth a scene of such stony awe that I gasped from sheer wonder that conquered even fear and repulsion. Bases of columns whose middles were higher than human sight… mere bases of things that must each dwarf the Eiffel Tower to insignificance… hieroglyphics carved by unthinkable hands in caverns where daylight can be only a remote legend….

I would not look at the marching things. That I desperately resolved as I heard their creaking joints and nitrous wheezing above the dead music and the dead tramping. It was merciful that they did not speak… but God! their crazy torches began to cast shadows on the surface of those stupendous columns. Hippopotami should not have human hands and carry torches… men should not have the heads of crocodiles….

I tried to turn away, but the shadows and the sounds and the stench were everywhere. Then I remembered something I used to do in half-conscious nightmares as a boy, and began to repeat to myself, “This is a dream! This is a dream!” But it was of no use, and I could only shut my eyes and pray…. at least, that is what I think I did, for one is never sure in visions — and I know this can have been nothing more. I wondered whether I should ever reach the world again, and at times would furtively open my eyes to see if I could discern any feature of the place other than the wind of spiced putrefaction, the topless columns, and the thaumatropically grotesque shadows of abnormal horror. The sputtering glare of multiplying torches now shone, and unless this hellish place were wholly without walls, I could not fail to see some boundary or fixed landmark soon. But I had to shut my eyes again when I realized how many of the things were assembling — and when I glimpsed a certain object walking solemnly and steadily without any body above the waist.

A fiendish and ululant corpse-gurgle or death-rattle now split the very atmosphere — the charnel atmosphere poisonous with naftha and bitumen blasts — in one concerted chorus from the ghoulish legion of hybrid blasphemies. My eyes, perversely shaken open, gazed for an instant upon a sight which no human creature could even imagine without panic, fear and physical exhaustion. The things had filed ceremonially in one direction, the direction of the noisome wind, where the light of their torches showed their bended heads — or the bended heads of such as had heads. They were worshipping before a great black fœtor-belching aperture which reached up almost out of sight, and which I could see was flanked at right angles by two giant staircases whose ends were far away in shadow. One of these was indubitably the staircase I had fallen down.

The dimensions of the hole were fully in proportion with those of the columns — an ordinary house would have been lost in it, and any average public building could easily have been moved in and out. It was so vast a surface that only by moving the eye could one trace its boundaries…. so vast, so hideously black, and so aromatically stinking…. Directly in front of this yawning Polyphemus-door the things were throwing objects — evidently sacrifices or religious offerings, to judge by their gestures. Khephren was their leader; sneering King Khephren or the guide Abdul Reis, crowned with a golden pshent and intoning endless formulæ with the hollow voice of the dead. By his side knelt beautiful Queen Nitocris, whom I saw in profile for a moment, noting that the right half of her face was eaten away by rats or other ghouls. And I shut my eyes again when I saw what objects were being thrown as offerings to the fœtid aperture or its possible local deity.

It occurred to me that, judging from the elaborateness of this worship, the concealed deity must be one of considerable importance. Was it Osiris or Isis, Horns or Anubis, or some vast unknown God of the Dead still more central and supreme? There is a legend that terrible altars and colossi were reared to an Unknown One before ever the known gods were worshipped….