IMPRISONED WITH THE PHARAOHS (2) 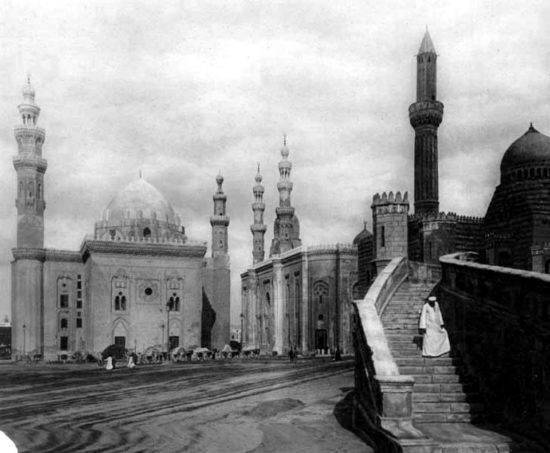 The roofed, quieter bazaars were hardly less alluring. Spice, perfume, incense beads, rugs, silks, and brass — old Mahmoud Suleiman squats cross-legged amidst his gummy bottles while chattering youths pulverize mustard in the hollowed-out capital of an ancient classic column — a Roman Corinthian, perhaps from neighboring Heliopolis, where Augustus stationed one of his three Egyptian legions. Antiquity begins to mingle with exoticism. And then the mosques and the museum — we saw them all, and tried not to let our Arabian revel succumb to the darker charm of Pharaonic Egypt which the museum’s priceless treasures offered. That was to be our climax, and for the present we concentrated on the mediæval Saracenic glories of the Califs whose magnificent tomb-mosques form a glittering færy necropolis on the edge of the Arabian Desert.

At length Abdul took us along the Sharia Mohammed Ali to the ancient mosque of Sultan Hassan, and the tower-flanked Babel-Azab, beyond which climbs the steep-walled pass to the mighty citadel that Saladin himself built with the stones of forgotten pyramids. It was sunset when we scaled that cliff, circled the modem mosque of Mohammed Ali, and looked down from the dizzy parapet over mystic Cairo — mystic Cairo all golden with its carven domes, its ethereal minarets and its flaming gardens.

Far over the city towered the great Roman dome of the new museum; and beyond it — across the cryptic yellow Nile that is the mother of eons and dynasties — lurked the menacing sands of the Libyan Desert, undulant and iridescent and evil with older arcana.

The red sun sank low, bringing the relentless chill of Egyptian dusk; and as it stood poised on the world’s rim like that ancient god of Heliopolis-Re-Harakhte, the HorizonSun — we saw silhouetted against its vermeil holocaust the black outlines of the Pyramids of Gizeh — the palæogean tombs there were hoary with a thousand years when Tut-AnkhAmen mounted his golden throne in distant Thebes. Then we knew that we were done with Saracen Cairo, and that we must taste the deeper mysteries of primal Egypt — the black Kem of Re and Amen, Isis and Osiris.

The next morning we visited the Pyramids, riding out in a Victoria across the island of Chizereh with its massive lebbakh trees, and the smaller English bridge to the western shore. Down the shore road we drove, between great rows of lebbakhs and past the vast Zoological Gardens to the suburb of Gizeh, where a new bridge to Cairo proper has since been built. Then, turning inland along the Sharia-el-Haram, we crossed a region of glassy canals and shabby native villages till before us loomed the objects of our quest, cleaving the mists of dawn and forming inverted replicas in the roadside pools. Forty centuries, as Napoleon had told his campaigners there, indeed looked down upon us.

The road now rose abruptly, till we finally reached our place of transfer between the trolley station and the Mena House Hotel. Abdul Reis, who capably purchased our Pyramid tickets, seemed to have an understanding with the crowding, yelling and offensive Bedouins who inhabited a squalid mud village some distance away and pestiferously assailed every traveler; for he kept them very decently at bay and secured an excellent pair of camels for us, himself mounting a donkey and assigning the leadership of our animals to a group of men and boys more expensive than useful. The area to be traversed was so small that camels were hardly needed, but we did not regret adding to our experience this troublesome form of desert navigation.

The pyramids stand on a high rock plateau, this group forming next to the northernmost of the series of regal and aristocratic cemeteries built in the neighborhood of the extinct capital Memphis, which lay on the same side of the Nile, somewhat south of Gizeh, and which flourished between 3400 and 2000 B.C. The greatest pyramid, which lies nearest the modern road, was built by King Cheops or Khufu about 2800 B.C., and stands more than 450 feet in perpendicular height. In a line southwest from this are successively the Second Pyramid, built a generation later by King Khephren, and though slightly smaller, looking even larger because set on higher ground, and the radically smaller Third Pyramid of King Mycerinus, built about 2700 B.C. Near the edge of the plateau and due east of the Second Pyramid, with a face probably altered to form a colossal portrait of Khephren, its royal restorer, stands the monstrous Sphinx-mute, sardonic, and wise beyond mankind and memory.

Minor pyramids and the traces of ruined minor pyramids are found in several places, and the whole plateau is pitted with the tombs of dignitaries of less than royal rank. These latter were originally marked by mastabas, or stone bench-like structures about the deep burial shafts, as found in other Memphian cemeteries and exemplified by Perneb’s Tomb in the Metropolitan Museum of New York. At Gizeh, however, all such visible things have been swept away by time and pillage; and only the rock-hewn shafts, either sandfilled or cleared out by archæologists, remain to attest their former existence. Connected with each tomb was a chapel in which priests and relatives offered food and prayer to the hovering ka or vital principle of the deceased. The small tombs have their chapels contained in their stone mastabas or superstructures, but the mortuary chapels of the pyramids, where regal Pharaohs lay, were separate temples, each to the east of its corresponding pyramid, and connected by a causeway to a massive gate-chapel or propylon at the edge of the rock plateau.

The gate-chapel leading to the Second Pyramid, nearly buried in the drifting sands, yawns subterraneously south-east of the Sphinx. Persistent tradition dubs it the “Temple of the Sphinx”; and it may perhaps be rightly called such if the Sphinx indeed represents the Second Pyramid’s builder Khephren. There are unpleasant tales of the Sphinx before Khephren — but whatever its elder features were, the monarch replaced them with his own that men might look at the colossus without fear.