IMPRISONED WITH THE PHARAOHS (4) 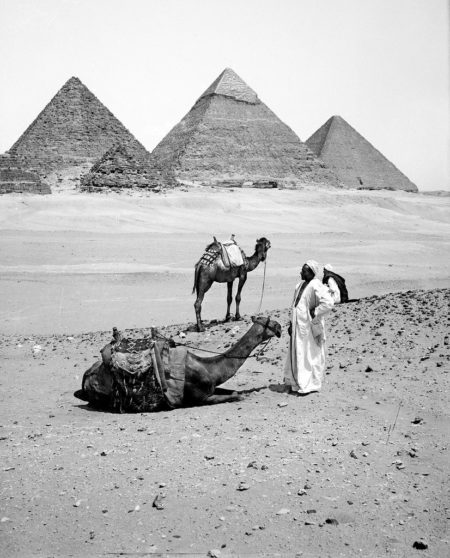 That evening, the members of our party feeling somewhat tired after the strenuous program of the day, I went alone with Abdul Reis for a walk through the picturesque Arab quarter. Though I had seen it by day, I wished to study the alleys and bazaars in the dusk, when rich shadows and mellow gleams of light would add to their glamor and fantastic illusion. The native crowds were thinning, but were still very noisy and numerous when we came upon a knot of reveling Bedouins in the Suken-Nahhasin, or bazaar of the coppersmiths. Their apparent leader, an insolent youth with heavy features and saucily cocked tarbush, took some notice of us, and evidently recognized with no great friendliness my competent but admittedly supercilious and sneeringly disposed guide.

Perhaps, I thought, he resented that, odd reproduction of the Sphinx’s half-smile which I had often remarked with amused irritation; or perhaps he did not like the hollow and sepulchral resonance of Abdul’s voice. At any rate, the exchange of ancestrally opprobrious language became very brisk; and before long Ali Ziz, as I heard the stranger called when called by no worse name, began to pull violently at Abdul’s robe, an action quickly reciprocated and leading to a spirited scuffle in which both combatants lost their sacredly cherished headgear and would have reached an even direr condition had I not intervened and separated them by main force.

My interference, at first seemingly unwelcome on both sides, succeeded at last in effecting a truce. Sullenly each belligerent composed his wrath and his attire, and with an assumption of dignity as profound as it was sudden, the two formed a curious pact of honor which I soon learned is a custom of great antiquity in Cairo — a pact for the settlement of their difference by means of a nocturnal fist fight atop the Great Pyramid, long after the departure of the last moonlight sightseer. Each duellist was to assemble a party of seconds, and the affair was to begin at midnight, proceeding by rounds in the most civilized possible fashion.

In all this planning there was much which excited my interest. The fight itself promised to be unique and spectacular, while the thought of the scene on that hoary pile overlooking the antediluvian plateau of Gizeh under the wan moon of the pallid small hours appealed to every fiber of imagination in me. A request found Abdul exceedingly willing to admit me to his party of seconds; so that all the rest of the early evening I accompanied him to various dens in the most lawless regions of the town — mostly northeast of the Ezbekiyeh — where he gathered one by one a select and formidable band of congenial cutthroats as his pugilistic background.

Shortly after nine our party, mounted on donkeys bearing such royal or tourist-reminiscent names as “Rameses,” “Mark Twain,” “J. P. Morgan,” and “Minnehaha,” edged through street labyrinths both Oriental and Occidental, crossed the muddy and mast-forested Nile by the bridge of the bronze lions, and cantered philosophically between the lebbakhs on the road to Gizeh. Slightly over two hours were consumed by the trip, toward the end of which we passed the last of the returning tourists, saluted the last inbound trolley-car, and were alone with the night and the past and the spectral moon.

Then we saw the vast pyramids at the end of the avenue, ghoulish with a dim atavistical menace which I had not seemed to notice in the daytime. Even the smallest of them held a hint of the ghastly — for was it not in this that they had buried Queen Nitocris alive in the Sixth Dynasty; subtle Queen Nitocris, who once invited all her, enemies to a feast in a temple below the Nile, and drowned them by opening the watergates? I recalled that the Arabs whisper things about Nitocris, and shun the Third Pyramid at certain phases of the moon. It must have been over her that Thomas Moore was brooding when he wrote a thing muttered about by Memphian boatmen:

“The subterranean nymph that dwells
‘Mid sunless gems and glories hid —
The lady of the Pyramid!”

Early as we were, Ali Ziz and his party were ahead of us; for we saw their donkeys outlined against the desert plateau at Kafrel-Haram; toward which squalid Arab settlement, close to the Sphinx, we had diverged instead of following the regular road to the Mena House, where some of the sleepy, inefficient police might have observed and halted us. Here, where filthy Bedouins stabled camels and donkeys in the rock tombs of Khephren’s courtiers, we were led up the rocks and over the sand to the Great Pyramid, up whose time-worn sides the Arabs swarmed eagerly, Abdul Reis offering me the assistance I did not need.

As most travelers know, the actual apex of this structure has long been worn away, leaving a reasonably flat platform twelve yards square. On this eery pinnacle a squared circle was formed, and in a few moments the sardonic desert moon leered down upon a battle which, but for the quality of the ringside cries, might well have occurred at some minor athletic club in America. As I watched it, I felt that some of our less desirable institutions were not lacking; for every blow, feint, and defense bespoke “stalling” to my not inexperienced eye. It was quickly over, and despite my misgivings as to methods I felt a sort of proprietary pride when Abdul Reis was adjudged the winner.