IMPRISONED WITH THE PHARAOHS (6) 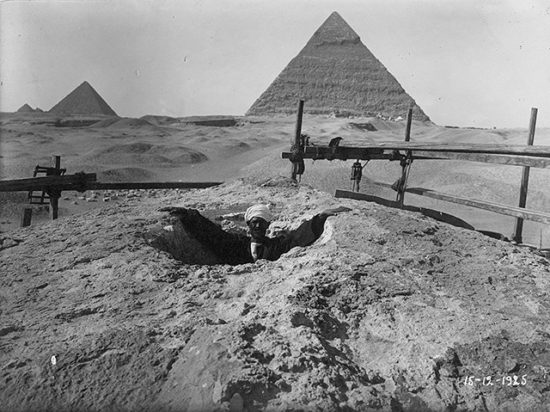 It was very gradually that I regained my senses after that eldritch flight through stygian space. The process was infinitely painful, and colored by fantastic dreams in which my bound and gagged condition found singular embodiment. The precise nature of these dreams was very clear while I was experiencing them, but became blurred in my recollection almost immediately afterward, and was soon reduced to the merest outline by the terrible events — real or imaginary — which followed. I dreamed that I was in the grasp of a great and horrible paw; a yellow, hairy, five-clawed paw which had reached out of the earth to crush and engulf me. And when I stopped to reflect what the paw was, it seemed to me that it was Egypt. In the dream I looked back at the events of the preceding weeks, and saw myself lured and enmeshed little by little, subtly and insidiously, by some hellish ghoul-spirit of the elder Nile sorcery; some spirit that was in Egypt before ever man was, and that will be when man is no more.

I saw the horror and unwholesome antiquity of Egypt, and the grisly alliance it has always had with the tombs and temples of the dead. I saw phantom processions of priests with the heads of bulls, falcons, cats, and ibises; phantom processions marching interminably through subterraneous labyrinths and avenues of titanic propylæa beside which a man is as a fly, and offering unnameable sacrifice to indescribable gods. Stone colossi marched in endless night and drove herds of grinning androsphinxes down to the shores of illimitable stagnant rivers of pitch. And behind it all I saw the ineffable malignity of primordial necromancy, black and amorphous, and fumbling greedily after me in the darkness to choke out the spirit that had dared to mock it by emulation.

In my sleeping brain there took shape a melodrama of sinister hatred and pursuit, and I saw the black soul of Egypt singling me out and calling me in inaudible whispers; calling and luring me, leading me on with the glitter and glamor of a Saracenic surface, but ever pulling me down to the age-mad catacombs and horrors of its dead and abysmal pharaonic heart.

Then the dream faces took on human resemblances, and I saw my guide Abdul Reis in the robes of a king, with the sneer of the Sphinx on his features. And I knew that those features were the features of Khephren the Great, who raised the Second Pyramid, carved over the Sphinx’s face in the likeness of his own and built that titanic gateway temple whose myraid corridors the archæologists think they have dug out of the cryptical sand and the uninformative rock. And I looked at the long, lean, rigid hand of Khephren; the long, lean, rigid hand as I had seen it on the diorite statue in the Cairo Museum — the statue they had found in the terrible gateway temple — and wondered that I had not shrieked when I saw it on Abdul Reis…. That hand! It was hideously cold, and it was crushing me; it was the cold and cramping of the sarcophagus…. the chill and constriction of unrememberable Egypt…. It was nighted, necropolitan Egypt itself…. that yellow paw and they whisper such things of Khephren….

But at this juncture I began to awake — or at least, to assume a condition less completely that of sleep than the one just preceding. I recalled the fight atop the pyramid, the treacherous Bedouins and their attack, my frightful descent by rope through endless rock depths, and my mad swinging and plunging in a chill void redolent of aromatic putrescence. I perceived that I now lay on a damp rock floor, and that my bonds were still biting into me with unloosened force. It was very cold, and I seemed to detect a faint current of noisome air sweeping across me. The cuts and bruises I had received from the jagged sides of the rock shaft were paining me woefully, their soreness enhanced to a stinging or burning acuteness by some pungent quality in the faint draft, and the mere act of rolling over was enough to set my whole frame throbbing with untold agony.

As I turned I felt a tug from above, and concluded that the rope whereby I was lowered still reached to the surface. Whether or not the Arabs still held it, I had no idea; nor had I any idea how far within the earth I was. I knew that the darkness around me was wholly or nearly total, since no ray of moonlight penetrated my blindfold; but I did not trust my senses enough to accept as evidence of extreme depth the sensation of vast duration which had characterized my descent.

Knowing at least that I was in a space of considerable extent reached from the surface directly above by an opening in the rock, I doubtfully conjectured that my prison was perhaps the buried gateway chapel of old Khephren — the Temple of the Sphinx — perhaps some inner corridor which the guides had not shown me during my morning visit, and from which I might easily escape if I could find my way to the barred entrance. It would be a labyrinthine wandering, but no worse than others out of which I had in the past found my way.

The first step was to get free of my bonds, gag, and blindfold; and this I knew would be no great task, since subtler experts than these Arabs had tried every known species of fetter upon me during my long and varied career as an exponent of escape, yet had never succeeded in defeating my methods.