IMPRISONED WITH THE PHARAOHS (9) 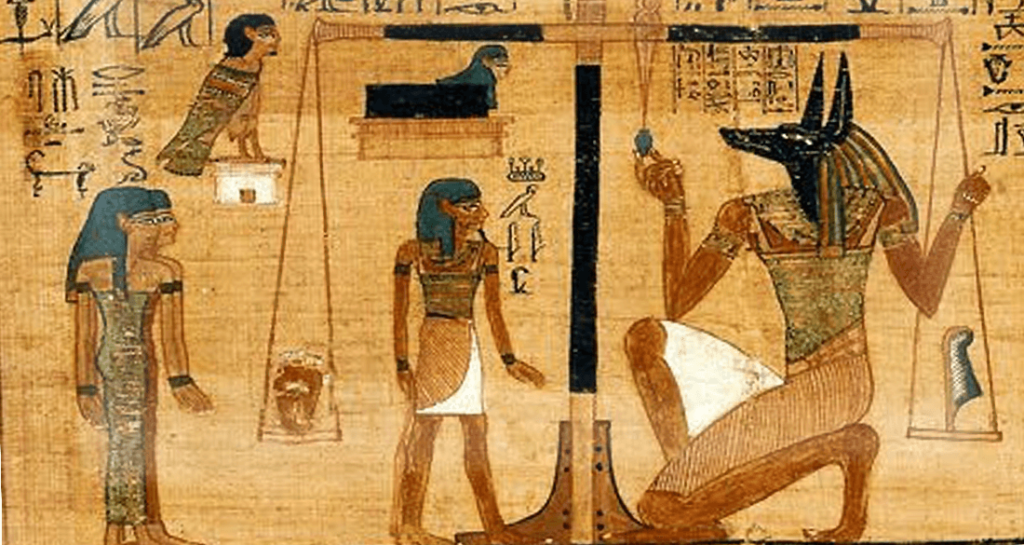 The more I reflected on the nature of this cavern wind, the greater my sense of disquiet became; for although despite its odor I had sought its source as at least an indirect clue to the outer world, I now saw plainly that this foul emanation could have no admixture or connection whatsoever with the clean air of the Libyan Desert, but must be essentially a thing vomited from sinister gulfs still lower down. I had, then, been walking in the wrong direction!

After a moment’s reflection I decided not to retrace my steps, Away from the draft I would have no landmarks, for the roughly level rock floor was devoid of distinctive configurations. If, however, I followed up the strange current, I would undoubtedly arrive at an aperture of some sort, from whose gate I could perhaps work round the walls to the opposite side of this Cyclopean and otherwise unnavigable hall. That I might fail, I well realized. I saw that this was no part of Khephren’s gateway temple which tourists know, and it struck me that this particular hall might be unknown even to archæologists, and merely stumbled upon by the inquisitive and malignant Arabs who had imprisoned me. If so, was there any present gate of escape to the known parts or to the outer air?

What evidence, indeed, did I now possess that this was the gateway temple at all? For a moment all my wildest speculations rushed back upon me, and I thought of that vivid melange of impressions — descent, suspension in space, the rope, my wounds, and the dreams that were frankly dreams. Was this the end of life for me? Or indeed, would it be merciful if this moment were the end? I could answer none of my own questions, but merely kept on, till Fate for a third time reduced me to oblivion.

This time there were no dreams, for the suddenness of the incident shocked me out of all thought either conscious or subconscious. Tripping on an unexpected descending step at a point where the offensive draft became strong enough to offer an actual physical resistance, I was precipitated headlong down a black flight of huge stone stairs into a gulf of hideousness unrelieved.

That I ever breathed again is a tribute to the inherent vitality of the healthy human organism. Often I look back to that night and feel a touch of actual humor in those repeated lapses of consciousness; lapses whose succession reminded me at the time of nothing more than the crude cinema melodramas of that period. Of course, it is possible that the repeated lapses never occurred; and that all the features of that underground nightmare were merely the dreams of one long coma which began with the shock of my descent into that abyss and ended with the healing balm of the outer air and of the rising sun which found me stretched on the sands of Gizeh before the sardonic and dawnflushed face of the Great Sphinx.

I prefer to believe this latter explanation as much as I can, hence was glad when the police told me that the barrier to Elephren’s gateway temple had been found unfastened, and that a sizable rift to the surface did actually exist in one comer of the still buried part. I was glad, too, when the doctors pronounced my wounds only those to be expected from my seizure, blindfolding, lowering, struggling with bonds, failing some distance — perhaps into a depression in the temple’s inner gallery — dragging myself to the outer barrier and escaping from it, and experiences like that…. a very soothing diagnosis. And yet I know that there must be more than appears on the surface. That extreme descent is too vivid a memory to be dismissed — and it is odd that no one has ever been able to find a man answering the description of my guide, Abdul Reis el Drogman — the tombthroated guide who looked and smiled like King Khephren.

I have digressed from my connected narrative — perhaps in the vain hope of evading the telling of that final incident; that incident which of all is most certainly an hallucination. But I promised to relate it, and I do not break promises. When I recovered — or seemed to recover — my senses after that fall down the black stone stairs, I was quite as alone and in darkness as before. The windy stench, bad enough before, was now fiendish; yet I had acquired enough familiarity by this time to bear it stoically. Dazedly I began to crawl away from the place whence the putrid wind came, and with my bleeding hands felt the colossal blocks of a mighty pavement. Once my head struck against a hard object, and when I felt of it I learned that it was the base of a column — a column of unbelievable immensity — whose surface was covered with gigantic chiseled hieroglyphics very perceptible to my touch.

Crawling on, I encountered other titan columns at incomprehensible distances apart; when suddenly my attention was captured by the realization of something which must have been impinging on my subconscious hearing long before the conscious sense was aware of it.

From some still lower chasm in earth’s bowels were proceeding certain sounds, measured and definite, and like nothing I had ever heard before. That they were very ancient and distinctly ceremonial I felt almost intuitively; and much reading in Egyptology led me to associate them with the flute, the sambuke, the sistrum, and the tympanum. In their rhythmic piping, droning, rattling and beating I felt an element of terror beyond all the known terrors of earth — a terror peculiarly dissociated from personal fear, and taking the form of a sort of objective pity for our planet, that it should hold within its depths such horrors as must lie beyond these ægipanic cacophonies. The sounds increased in volume, and I felt that they were approaching. Then — and may all the gods of all pantheons unite to keep the like from my ears again — I began to hear, faintly and afar off, the morbid and millennial tramping of the marching things.