IMPRISONED WITH THE PHARAOHS (7) 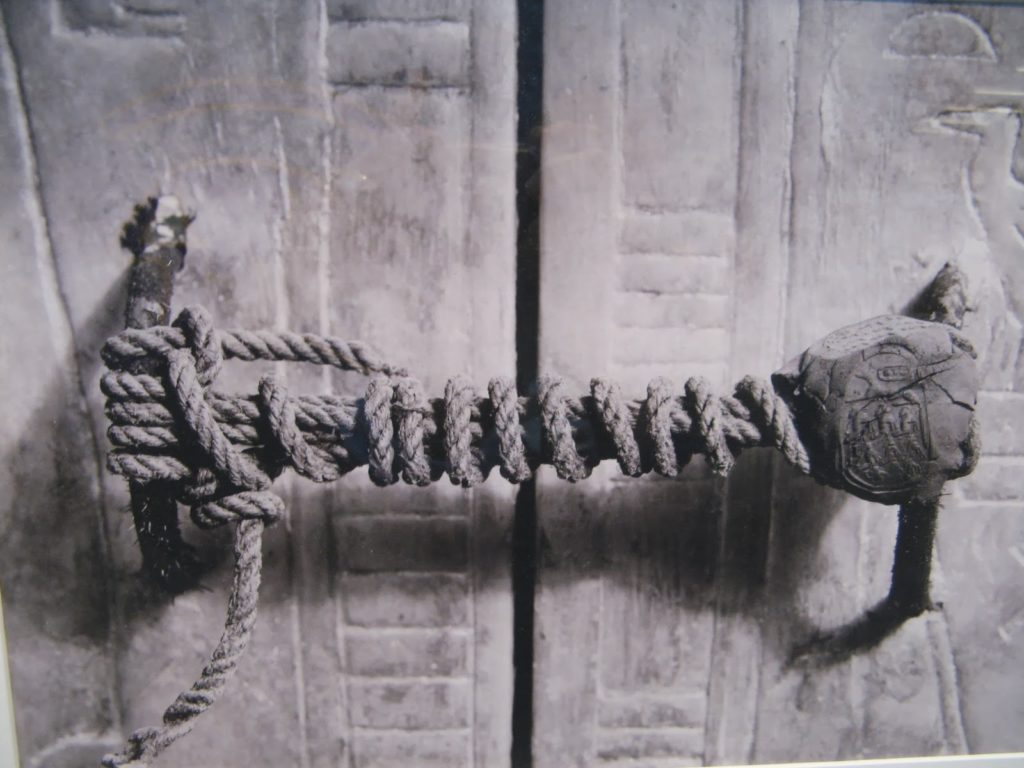 Then it occurred to me that the Arabs might be ready to meet and attack me at the entrance upon any evidence of my probable escape from the binding cords, as would be furnished by any decided agitation of the rope which they probably held. This, of course, was taking for granted that my place of confinement was indeed Khephren’s Temple of the Sphinx. The direct opening in the roof, wherever it might lurk, could not be beyond easy reach of the ordinary modern entrance near the Sphinx; if in truth it were any great distance at all on the surface, since the total area known to visitors is not at all enormous. I had not noticed any such opening during my daytime pilgrimage, but knew that these things are easily overlooked amidst the drifting sands.

Thinking these matters over as I lay bent and bound on the rock floor, I nearly forgot the horrors of abysmal descent and cavernous swinging which had so lately reduced me to a coma. My present thought was only to outwit the Arabs, and I accordingly determined to work myself free as quickly as possible, avoiding any tug on the descending line which might betray an effective or even problematical attempt at freedom.

This, however, was more easily determined than effected. A few preliminary trials made it clear that little could be accomplished without considerable motion; and it did not surprise me when, after one especially energetic struggle, I began to feel the coils of falling rope as they piled up about me and upon me. Obviously, I thought, the Bedouins had felt my movements and released their end of the rope; hastening no doubt to the temple’s true entrance to lie murderously in wait for me.

The prospect was not pleasing — but I had faced worse in my time without flinching, and would not flinch now. At, present I must first of all free myself of bonds, then trust to ingenuity to escape from the temple unharmed. It is curious how implicitly I had come to believe myself in the old temple of Khephren beside the Sphinx, only a short distance below the ground.

That belief was shattered, and every pristine apprehension of preternatural depth and demoniac mystery revived, by a circumstance which grew in horror and significance even as I formulated my philosophical plan. I have said that the falling rope was piling up about and upon me. Now I saw that it was continuing to pile, as no rope of normal length could possibly do. It gained in momentum and became an avalanche of hemp, accumulating mountainously on the floor and half burying me beneath its swiftly multiplying coils. Soon I was completely engulfed and gasping for breath as the increasing convolutions submerged and stifled me.

My senses tottered again, and I vainly tried to fight off a menace desperate and ineluctable. It was not merely that I was tortured beyond human endurance — not merely, that life and breath seemed to be crushed slowly out of me — it was the knowledge of what those unnatural lengths of rope implied, and the consciousness of what unknown and incalculable gulfs of inner earth must at this moment be surrounding me. My endless descent and swinging flight through goblin space, then, must have been real, and even now I must be lying helpless in some nameless cavern world toward the core of the planet. Such a sudden confirmation of ultimate horror was insupportable, and a second time I lapsed into merciful oblivion.

When I say oblivion, I do not imply that I was free from dreams. On the contrary, my absence from the conscious world was marked by visions of the most unutterable hideousness. God!… If only I had not read so much Egyptology before coming to this land which is the fountain of all darkness and terror! This second spell of fainting filled my sleeping mind anew with shivering realization of the country and its archaic secrets, and through some damnable chance my dreams turned to the ancient notions of the dead and their sojournings in soul and body beyond those mysterious tombs which were more houses than graves. I recalled, in dream-shapes which it is well that I do not remember, the peculiar and elaborate construction of Egyptian sepulchers; and the exceedingly singular and terrific doctrines which determined this construction.

All these people thought of was death and the dead. They conceived of a literal resurrection of the body which made them mummify it with desperate care, and preserve all the vital organs in canopic jars near the corpse; whilst besides the body they believed in two other elements, the soul, which after its weighing and approval by Osiris dwelt in the land of the blest, and the obscure and portentous ka or life-principle which wandered about the upper and lower worlds in a horrible way, demanding occasional access to the preserved body, consuming the food offerings brought by priests and pious relatives to the mortuary chapel, and sometimes — as men whispered — taking its body or the wooden double always buried beside it and stalking noxiously abroad on errands peculiarly repellent.

For thousands of years those bodies rested gorgeously encased and staring glassily upward when not visited by the ka, awaiting the day when Osiris should restore both ka and soul, and lead forth the stiff legions of the dead from the sunken houses of sleep. It was to have been a glorious rebirth — but not all souls were approved, nor were all tombs inviolate, so that certain grotesque mistakes and fiendish abnormalities were to be looked for. Even today the Arabs murmur of unsanctified convocations and unwholesome worship in forgotten nether abysses, which only winged invisible kas and soulless mummies may visit and return unscathed.

Perhaps the most leeringly blood-congealing legends are those which relate to certain perverse products of decadent priestcraft — composite mummies made by the artificial union of human trunks and limbs with the heads of animals in imitation of the elder gods. At all stages of history the sacred animals were mummified, so that consecrated bulls, cats, ibises, crocodiles and the like might return some day to greater glory. But only in the decadence did they mix the human and animal in the same mummy — only in the decadence, when they did not understand the rights and prerogatives of the ka and the soul.