IMPRISONED WITH THE PHARAOHS (3) 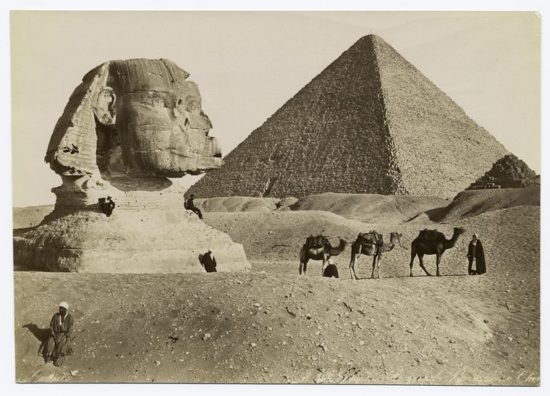 It was in the great gateway-temple that the life-size diorite statue of Khephren now in the Cairo museum was found; a statue before which I stood in awe when I beheld it. Whether the whole edifice is now excavated I am not certain, but in 1910 most of it was below ground, with the entrance heavily barred at night. Germans were in charge of the work, and the war or other things may have stopped them. I would give much, in view of my experience and of certain Bedouin whisperings discredited or unknown in Cairo, to know what has developed in connection with a certain well in a transverse gallery where statues of the Pharaoh were found in curious juxtaposition to the statues of baboons.

The road, as we traversed it on our camels that morning, curved sharply past the wooden police quarters, post office, drug store and shops on the left, and plunged south and east in a complete bend that scaled the rock plateau and brought us face to face with the desert under the lee of the Great Pyramid. Past Cyclopean masonry we rode, rounding the eastern face and looking down ahead into a valley of minor pyramids beyond which the eternal Nile glistened to the east, and the eternal desert shimmered to the west. Very close loomed the three major pyramids, the greatest devoid of outer casing and showing its bulk of great stones, but the others retaining here and there the neatly fitted covering which had made them smooth and finished in their day.

Presently we descended toward the Sphinx, and sat silent beneath the spell of those terrible unseeing eyes. On the vast stone breast we faintly discerned the emblem of ReHarakhte, for whose image the Sphinx was mistaken in a late dynasty; and though sand covered the tablet between the great paws, we recalled what Thutmosis IV inscribed thereon, and the dream he had when a prince. It was then that the smile of the Sphinx vaguely displeased us, and made us wonder about the legends of subterranean passages beneath the monstrous creature, leading down, down, to depths none might dare hint at — depths connected with mysteries older than the dynastic Egypt we excavate, and having a sinister relation to the persistence of abnormal, animal-headed gods in the ancient Nilotic pantheon. Then, too, it was I asked myself an idle question whose hideous significance was not to appear for many an hour.

Other tourists now began to overtake us, and we moved on to the sand-choked Temple of the Sphinx, fifty yards to the southeast, which I have previously mentioned as the great gate of the causeway to the Second Pyramid’s mortuary chapel on the plateau. Most of it was still underground, and although we dismounted and descended through a modern passageway to its alabaster corridor and pillared hall, I felt that Abdul and the local German attendant had not shown us all there was to see.

After this we made the conventional circuit of the pyramid plateau, examining the Second Pyramid and the peculiar ruins of its mortuary chapel to the east, the Third Pyramid and its miniature southern satellites and ruined, eastern chapel, the rock tombs and the honeycombings of the Fourth and Fifth dynasties, and the famous Campbell’s Tomb whose shadowy shaft sinks precipitously for fifty-three feet to a sinister sarcophagus which one of our camel drivers divested of the cumbering sand after a vertiginous descent by rope.

Cries now assailed us from the Great Pyramid, where Bedouins were besieging,a party of tourists with offers of speed in the performance of solitary trips up and down. Seven minutes is said to be the record for such an ascent and descent, but many lusty sheiks and sons of sheiks assured us they could cut it to five if given the requisite impetus of liberal baksheesh. They did not get this impetus, though we did let Abdul take us up, thus obtaining a view of unprecedented magnificence which included not only remote and glittering Cairo with its crowned citadel background of gold-violet hills, but all the pyramids of the Memphian district as well, from Abu Roash on the north to the Dashur on the south. The Sakkara step-pyramid, which marks the evolution of the low mastaba into the true pyramid, showed clearly and alluringly in the sandy distance. It is close to this transition-monument that the famed tomb of Pemeb was found — more than four hundred miles north of the Theban rock valley where Tut-Ankh-Amen sleeps. Again I was forced to silence through sheer awe. The prospect of such antiquity, and the secrets each hoary monument seemed to hold and brood over, filled me with a reverence and sense of immensity nothing else ever gave me.

Fatigued by our climb, and disgusted with the importunate Bedouins whose actions seemed to defy every rule of taste, we omitted the arduous detail of entering the cramped interior passages of any of the pyramids, though we saw several of the hardiest tourists preparing for the suffocating crawl through Cheops’ mightiest memorial. As we dismissed and overpaid our local bodyguard and drove back to Cairo with Abdul Reis under the afternoon sun, we half regretted the omission we had made. Such fascinating things were whispered about lower pyramid passages not in the guide books; passages whose entrances had been hastily blocked up and concealed by certain uncommunicative archæologists who had found and began to explore them.

Of course, this whispering was largely baseless on the face of it; but it was curious to reflect how persistently visitors were forbidden to enter the Pyramids at night, or to visit the lowest burrows and crypt of the Great Pyramid. Perhaps in the latter case it was the psychological effect which was feared — the effect on the visitor of feeling himself huddled down beneath a gigantic world of solid masonry; joined to the life he has known by the merest tube, in which he may only crawl, and which any accident or evil design might block. The whole subject seemed so weird and alluring that we resolved to pay the pyramid plateau another visit at the earliest possible opportunity. For me this opportunity came much earlier than I expected.