There are a million cute animal movies out there, most of them cartoons with happy-sappy endings, from Dumbo and 101 Dalmatians to Finding Nemo and Kung Fu Panda.

True, some of the movies on this list are cartoons. And yes, most of them end happily. But these movies aren’t for little kids — they’re neither sappy nor silly.

So avoid Marley & Me and Beethoven, Stuart Little and Free Willy. Watch these instead. 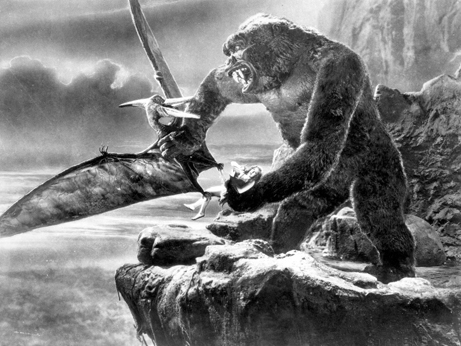 Though the movie is a thriller — and it is exciting and scary, even if the stop-motion animation isn’t as “realistic” as the digital effects we’re used to these days — you will also find it quite tragic. Try to overlook the stereotyped island natives; focus on the gorilla and the girl he loves. Don’t be surprised if you end up in tears.

The great Cary Grant plays a geeky paleontologist; the equally great Katharine Hepburn plays a kooky rich woman with a tame leopard. When a dangerous leopard escapes from a nearby circus, they don’t know which one is which. Hijinks ensue.

PS: The white-haired fox terrier in the movie is Asta, one of Hollywood’s most famous dogs.

Considered one of the three best animated movies of all time, Bambi is not for the faint of heart. Bambi’s mother is killed by hunters, he has to fight a duel (nearly to the death) with another buck, and then the forest goes up in flames. It’s a wild ride.

PS: Former Beatle Paul McCartney credits his animal rights activism to his having seen Bambi as a child. This sort of thing — outrage about killing cute animals, though not always un-cute ones — is so common that it’s known as the Bambi Effect. 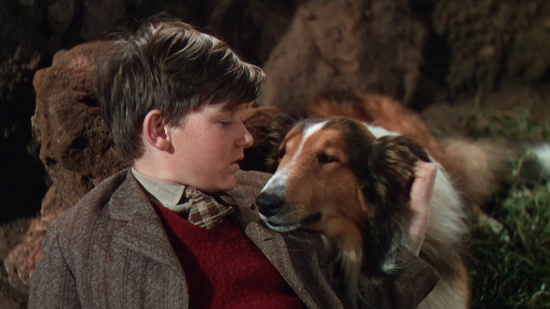 A poor English boy named Joe — played by Roddy McDowall, who’d grow up to portray a chimpanzee scientist in the Planet of the Apes movies — is forced to sell his beloved dog Lassie (a long-haired collie, bred for herding sheep) to a duke. Lassie keeps escaping to Joe, no matter how far away she’s taken.

PS: Pal, the dog who plays Lassie in this movie, went on to portray Lassie in six other movies. In 1954, the first in a series of Pal’s descendants played Lassie in a long-running TV show of that title.

Velvet, a 12-year-old English girl, saves a horse named “the Pie” from the glue factory — and helps train it for the Grand National steeplechase, a dangerous form of horse racing that involves jumping ditches and fences. Only male jockeys are allowed to ride in the race… so Velvet ends up disguising herself as a man. One of the greatest sports movies.

Pigs lead a revolution against their farm’s human owner… but soon they’re treating their fellow farm animals even worse than he used to do. This adaptation of George Orwell’s dystopian science fiction novel was funded by the Central Intelligence Agency, which was trying to brainwash children in the name of national security and defense.

Two brothers smuggle a mischief-loving seal home from summer vacation and try to hide it from their parents. Like other live-action Disney movies from the 1950s and early ’60s — That Darn Cat, The Shaggy Dog, The Three Lives of Thomasina — its animal star represents the spirit of rebellion against everyday life.

1968
PLANET OF THE APES
Directed by Franklin J.Schaffner

Astronauts crash on a planet where apes rule and humans can’t speak — and don’t wear much clothing. They are captured by the apes, who cage them and treat them as cruelly as we humans often treat animals. There is some violent action, a couple of naked bottoms, and a surprise plot twist that will freak you out forever.

Billy is a neglected, bullied English schoolboy who doesn’t want to end up a coal miner like his grown-up brother. When he finds a young kestrel (falcon), he steals a book about falconry and trains the bird, which makes him happy for the first time. But then his brother gets angry at Billy, and takes revenge on his pet. Although it’s a bleak movie, it’s well-made and worth seeing; in fact, in 2005 the British Film Institute included it on a list of “The 50 films you should see by the age of 14.”

1970
DOUGAL AND THE BLUE CAT
Directed by Serge Danot

A weird, funny stop-motion animated French movie (later dubbed in English) about a grumpy, candy-loving Skye terrier named Dougal — and Buxton, a cat who helps sinister Madam Blue take over the Magic Garden. It’s like the Beatles’ Yellow Submarine, but with animals instead of a band named after insects.

PS: The movie is based on a French TV show, The Magic Round-about, whose English-language version (created for the BBC by Eric Thompson) is a cult classic.

When 11-year-old Napoleon is orphaned, he runs away to the mountains with his friend Samantha (played by the child actress Jodie Foster), a rooster, and Major, a retired circus lion. A cougar and a bear attack them, but Major saves the day.

PS: During the movie’s filming, the lion playing Major grabbed Jodie Foster in his mouth, held her sideways, and shook her like a doll. She still has scars from this incident, not to mention an irrational fear of cats.

1978
WATERSHIP DOWN
Directed by Martin Rosen

Adapted from a well-known novel by Richard Adams, the movie tells the story of scrappy rabbits who form their own warren against all odds. It switches between stylized animation, for scenes about rabbit mythology, and more realistic animation.

PS: This animated movie about fluffy bunnies is a lot darker — scary, sometimes violent — than you might expect. You might want to avoid it.

A boy named Alec is saved from a shipwreck by a wild Arabian stallion, in this beautifully filmed and mostly wordless adaptation of a classic
1941 children’s novel by Walter Farley. Stranded on an uninhabited island, the horse (Alec calls him “The Black”) and the boy become friends. Once back in America, Alec and The Black enter a race. Who will win?

PS: The movie was followed by a 1983 sequel, The Black Stallion Returns; and by a 1990–1993 TV series. Neither of these is as compelling as the 1979 movie. Ballard worked as second unit director on George Lucas’s Star Wars before becoming known as a director of animal films.

The film dramatizes the true story of Farley Mowat, a government biologist who is sent to the Canadian tundra to investigate the harm that wolves were supposedly doing to caribou herds. Tyler (the character based on Mowat) discovers that wolves aren’t marauding killers; in fact, they play a key role in the Arctic ecosystem.

You’ll enjoy the scene where Mowat pees on rocks around his campsite; and maybe the mouse-eating, too. What you will not enjoy is the unhappy ending.

1987
HARRY AND THE HENDERSONS
Directed by William Dear

On their way home from a camping trip, a Seattle family runs over a legendary cryptid: Bigfoot. They name him Harry and take him home. Though critics panned the silly comedy, John Lithgow’s performance as the gentle, misunderstood Harry will remain with you — for better or worse — for the rest of your life.

In this anime movie by one of the genre’s greatest directors, two young girls befriend Totoro, a friendly spirit-creature with rabbit ears who represents and protects Japan’s satoyama — the border zone between settled areas and mountainous wilderness. Totoro lives inside a camphor tree, rides around on a bus-shaped giant cat, and dances to help seeds sprout into new trees.

Sonora, an orphaned tomboy, runs away from home and becomes the star of a Death-Defying Diving Horse Girl Show in 1930s Atlantic City, New Jersey. Then she’s blinded in a horse-diving accident. But she doesn’t give up! She keeps diving with horses! And the son of the show’s owner falls in love with her! They live happily ever after! The craziest thing about this seemingly outlandish story? It’s based on the real-life events chronicled in Sonora Webster Carver’s 1961 memoir, A Girl and Five Brave Horses.

Babe is a piglet raised by a sheepdog on Farmer Hoggett’s farm. He turns out to be good at herding — particularly after Maa, an elderly sheep, suggests he ask them politely (“Excuse me, ladies”), instead of chasing them like a dog. So Farmer Hoggett enters Babe in a competitive sheep-herding contest. Trouble follows.

PS: The movie is an adaptation of the 1983 novel, The Sheep-Pig, by Dick King-Smith. The film was nominated by seven Oscars, and was followed by a 1998 sequel, Babe: Pig in the City, which some (but by no means all) fans claim is even more entertaining than the original.

Amy, a 13-year-old girl, accidentally becomes a surrogate mother to a flock of Canada geese. To protect them from having their wings clipped by the game warden, Amy’s inventor father figures out a way to get the geese to fly to a bird sanctuary — by having Amy lead them there, piloting an ultralight aircraft.

Two grownup brothers inherit a falling-down mansion and a failing string factory. They decide to fix up the mansion and sell it. But first they need to get rid of the mansion’s inhabitant, a mouse. Despite adopting an insane cat (Catzilla) and hiring an exterminator, the brothers can’t kill the mouse — who ends up saving the factory. A dark but funny movie.

The director of The Black Stallion, Never Cry Wolf, and Fly Away Home adapts a real-life story about Xan, an African boy whose family has a pet cheetah, Duma. Xan must return Duma to the wild before the cheetah is put into a zoo. So the duo head out, by motorcycle and on foot, into the scorching desert and dangerous mountains.

2005
MARCH OF THE PENGUINS
Directed by Luc Jacquet

Forget Happy Feet. In this amazing and emotional French documentary, we watch the emperor penguins of Antarctica leave their usual habitat (that is, the ocean) and march inland to their breeding grounds, where they lay eggs. Both the male and female penguins are needed to keep the egg warm through the winter. And then it gets even tougher — life for an emperor penguin chick is a constant struggle for survival.

PS: The movie won, and richly deserved, an Oscar for Best Documentary Feature. The director later told an interviewer that no matter how human the penguins may seem, “I find it intellectually dishonest to impose this viewpoint on something that’s part of nature… You have to let penguins be penguins and humans be humans.”

This lovely animated movie is about Ponyo, a fish-girl who lives beneath the waves, and her new friend Sosuke, a five-year-old human boy. Ponyo wants to become human — so her sea-goddess grandmother tests them by flooding the land with water. Sosuke and Ponyo must rescue Sosuke’s mother.

There are so many animated movies about animals from Walt Disney — how to decide which ones to mention here? In the case of Bolt, the answer is: because of Rhino, the TV-obsessed hamster-in-a-plastic-ball character who steals the movie. Voiced by Mark Walton, Rhino is the ultimate fanboy and a surprisingly effective sidekick. In fact, Rhino should get his own movie some day.

When Mr. Fox, a retired poultry thief, and his opossum friend steal food from three farmers (Boggis, Bunce, and Bean), his home gets destroyed and his nephew is captured. What to do now? This stop-motion adaptation of Roald Dahl’s children’s novel is rated PG (for action, smoking, and slang humor) but it’s innocent fun.