Some social critics (most famously, perhaps, Lewis Mumford and Jane Jacobs) have argued that the automobile is a menace to civilization.

Our reliance on cars, they remind us, has not only contributed to air pollution and climate change, but also the rise in obesity, and accidental deaths. It has also isolated us from one other… because cars make it convenient for us to drive long distances (to work, school, and elsewhere) instead of walking or taking public transportation.

Here are some favorite movies in which people travel by means other than cars. 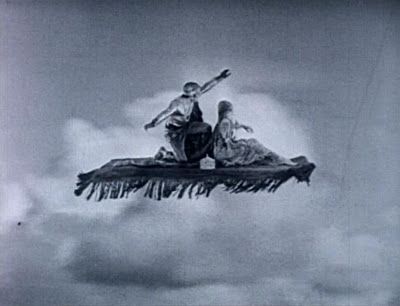 1924
THE THIEF OF BAGDAD
Directed by Raoul Walsh

The swashbuckling Douglas Fairbanks — who’d previously portrayed a musketeer and Robin Hood—plays an athletic thief who falls in love with a caliph’s daughter. He travels via flying carpet… and flying horse.

1926
THE GENERAL
Directed by Buster Keaton and Clyde Bruckman

Considered one of the greatest movies ever, The General takes place during the Civil War. Buster Keaton plays a train engineer whose locomotive is stolen; many dangerous and hilarious stunts later, he gets it back. 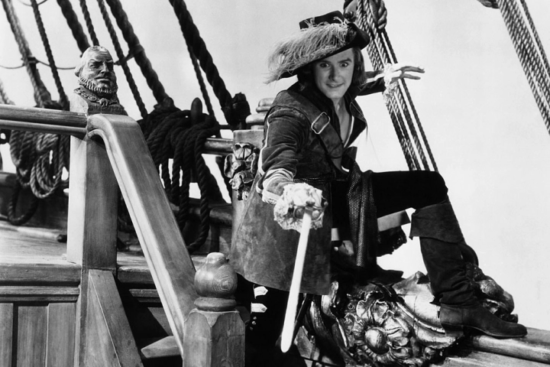 In Errol Flynn’s first starring role, the dashing actor plays a man sentenced to slavery in the English colony of Port Royal. He escapes and turns pirate, then defends the colony against French warships in a thrilling sea battle.

When spoiled rich kid Harvey (Freddie Bartholomew) falls off a steamship, he’s rescued by a fishing schooner. Tough but kindly fisherman Manuel (Spencer Tracy) teaches him the ways of the sea. It’s a tear-jerker. 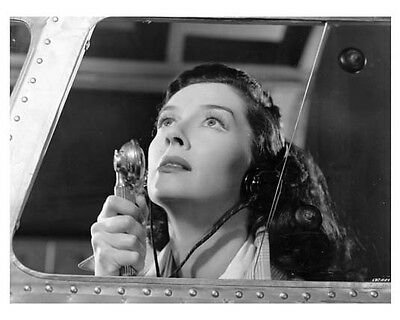 In this movie made during World War II, Rosalind Russell portrays a well-known aviatrix — loosely based on real-life flyer Amelia Earhart — who fights against male prejudice. On a top-secret government mission, she vanishes.

Gregory Peck stars as a stern officer in an epic about the US Army’s Eighth Air Force, which flew dangerous bombing missions over Germany during World War II. The movie uses actual combat footage during the battle scenes. 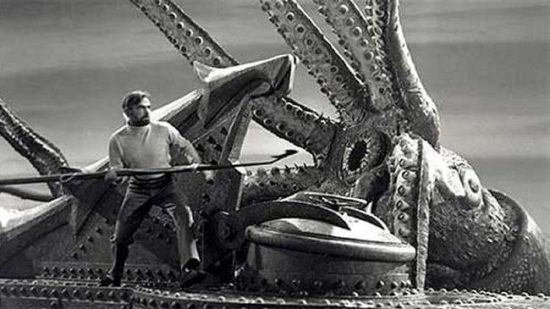 This action-packed adaptation of Jules Verne’s classic science-fiction novel is set aboard the Nautilus, a high-tech submarine invented by the mysterious, cruel Captain Nemo (James Mason). Cryptid fans will be excited to hear that the movie features a giant squid battle.

1956
AROUND THE WORLD IN 80 DAYS
Directed by Michael Anderson

Another Jules Verne adaptation: A detective trails Phileas Fogg (David Niven) and Passepartout (the Mexican comedian Cantinflas) as they hopscotch around the globe via boat, train, and hot air balloon. 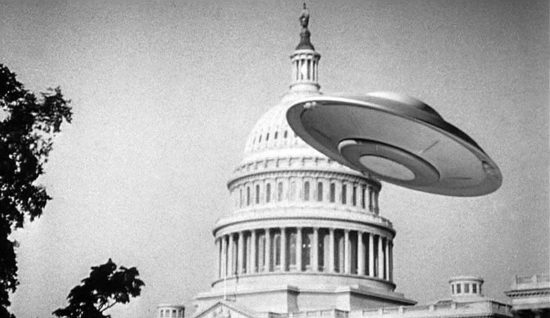 1956
EARTH VS. THE FLYING SAUCERS
Directed by Fred F. Sears

After Earthlings fire upon a flying saucer, an alien armada attacks Paris, London, Moscow, and Washington. The special effects by Ray Harryhausen might look silly now, but they were awesome at the time.

Nerdy Professor Brainard (Fred MacMurray) discovers a bouncy substance — he names it Flubber — which, when bombarded with radiation, allows his junky old Model T automobile to sail through the air.

A madcap romp set in the first decade of flight. Biplane pilots from America, England, Germany, France, and Italy compete in a race — full of aerial stunts, and crashes — from London to Paris. 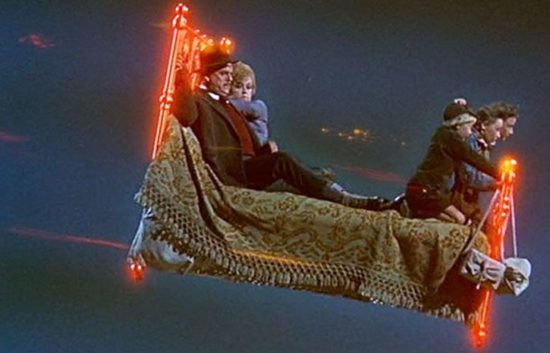 During World War II, Miss Price (Angela Lansbury), an apprentice witch, wants to help the British war effort. So she and three children fly — on a brass bed — into a cartoon world, in search of a magical medallion.

Kevin, an 11-year-old history buff, joins up with a bumbling gang of dwarves who transport themselves across time and space. In search of riches, they rob Napoleon, Robin Hood, King Agamemnon… and then confront an evil sorcerer. 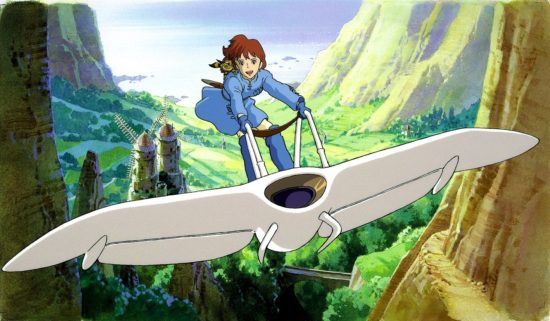 A peace-loving warrior princess, who travels by “windriding” on a jet-assisted glider, tries to prevent two warring nations from destroying their planet, whose ecosystem is in jeopardy.

When the bow tie-wearing man-child Pee-wee Herman (Paul Reubens) loses his beloved bicycle, he voyages across a wacky version of America — via boxcar and motorcycle — to get it back. Very strange and funny.

1985
THE GOONIES
Directed by Richard Donner

Hoping to save their homes in the “Goon Docks” from demolition, a gang of tween friends led by Mikey (Sean Astin, who later played Sam in the Lord of the Rings movies) ride their one-speed bicycles in search of pirate treasure. 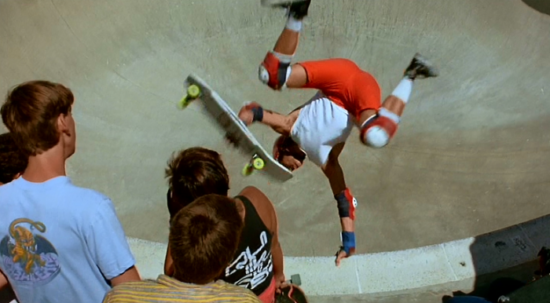 Though you may be distracted by the ground-breaking interaction between real and cartoon characters in this fun mystery, its plot concerns the demise of Los Angeles streetcars and the rise of the automobile.

Kiki, a 13-year-old witch moves to the city with her talking cat, Jiji. In order to perfect her broom-riding skills, she starts a delivery service — and, later, uses her ability to rescue a friend from a runaway dirigible. 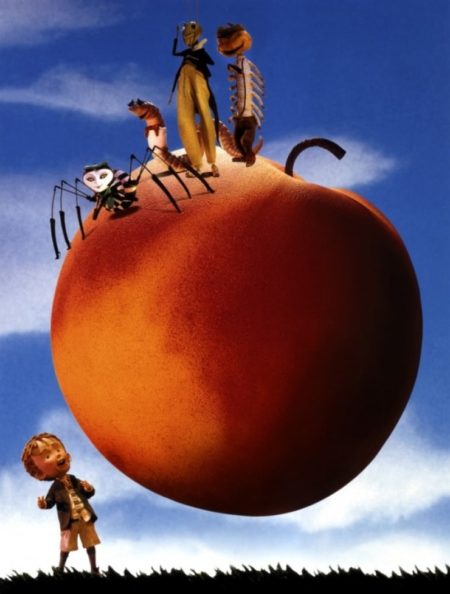 1996
JAMES AND THE GIANT PEACH
Directed by Henry Selick

In this half-real and half-animated adaptation of Roald Dahl’s famous novel, a seven-year-old boy escapes from his wicked aunts inside a giant peach borne aloft by seagulls — and accompanied by huge insects.

In the first installment in the Harry Potter film series, Harry learns to fly a broom — and play Quidditch. He also travels via steam engine. In fact, nobody but a Muggle drives a car.

2003
THE TRIPLETTES OF BELLEVILLE
Directed by Sylvain Chomet

After her bicycle racer grandson is kidnapped by car-driving gangsters, Madame Souza teams up with an elderly trio of improvisational musicians to rescue him. A pedal-powered contraption comes in handy. 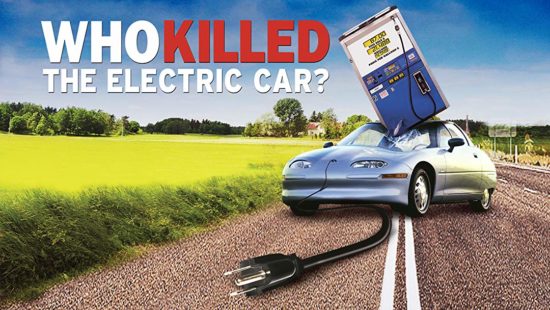 2006
WHO KILLED THE ELECTRIC CAR?
Directed by Chris Paine

In the 1990s, big auto manufacturers like GM briefly produced cars whose engines were powered by rechargeable battery packs instead of gasoline… and then they destroyed them. This documentary asks why.

Perhaps the coolest customer in this movie, which is based on the first novel in Philip Pullman’s His Dark Materials trilogy, is Lee Scoresby (Sam Elliott). He’s a skilled Texan “aeronaut” who saves the day in his hot-air balloon.