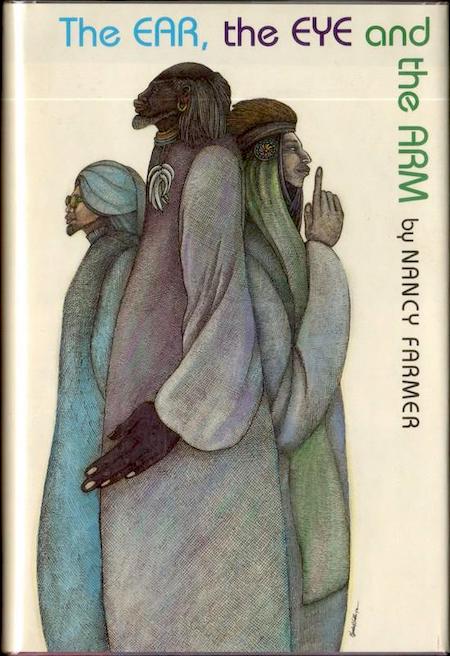 Nancy Farmer’s children’s cyberpunk adventure The Ear, the Eye and the Arm (1994).

In the year 2194, Africa is the world’s dominant continent. Zimbabwe, a rising African power, plays host to communities including the African Shona and Xhosa tribes, and the English and Portuguese tribes — which are segregated not so much by race as by wealth and culture. While Chief of Security General Matsika leads the country’s fight against the Masks, a criminal gang, his three children sneak out of their fortified mansion in Harare, to explore the bustling marketplace of Mbare Musika. Kidnapped, Tendai, Rita, and Kuda undergo a series of unfortunate events — from being forced to mine reusable plastic from a massive dump, to an unpleasant stay in Resthaven, an independent country within Zimbabwe that aims to retain traditional African culture, to a climactic encounter with the Big-Head Mask in the Masks’ mile-high-skyscraper secret lair. (Because this is a children’s book, we never get the sense that they’re actually in mortal danger, except perhaps for the final scene.) Meanwhile, the children are sought by the titular detectives, a bumbling, argumentative, multicultural trio of mutants, each of whom possesses a unique ability: the Ear has super-sensitive hearing, the Eye has hawk-like vision, and the Arm is an empath. Critics at the time admired the fact that Farmer, a white author, normalized the characters’ Zimbabwean perspective, and honored the culture’s myths and religious beliefs.

Fun facts: Farmer enlisted in the Peace Corps, and subsequently worked in Mozambique and Rhodesia (present-day Zimbabwe), where from 1975–1978 she studied biological methods of controlling the tsetse fly. The Ear, the Eye and the Arm was a Newbery Honor Book, an ALA Notable Book, and an ALA Best Book for Young Adults.