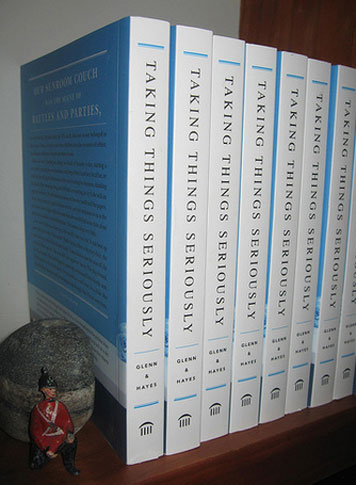 On January 3, 2005, I emailed my friend Carol Hayes, a graphic designer: “My motto this year is ‘Less talk, more rock.’ So I want to get this photo book project going right away. Are you still in?” She was.

The photo book project was one we’d talked about at a party months earlier. I’d been poking around our hosts’ Brooklyn apartment, admiring Joel’s bear lamp and Kelly’s tiny pine cone, and discoursing tipsily on the counterintuitive fact that we enlightened citizens of the 21st century still fall under the spell of savage totems — tutelary spirits, that is to say, in the form of natural objects. Many of us invest ordinary objects with other sorts of extraordinary significance, too. My friend Tony crams a U.S. Navy 100-pound practice bomb into his tiny workspace for much the same reason that Greg, a colleague of mine at the Boston Globe, displays a wobbly wooden Santa in his kitchen year-round. These doohickeys are actually fossils, petrified evidence of a vanished epoch (young adulthood). Other writers, thinkers, designers and artists of my acquaintance cherish things — sunglasses found at a yard sale, a colored-sand-filled glass clown, a one-eyed ceramic frog — for equally irrational reasons.

The more we talked about it, the more we agreed that almost everyone we know reverentially displays in his home or workspace at least one oddball, funny-looking, apparently worthless item as though it were a precious, irreplaceable artifact. Carol’s interest in these objects was more aesthetic than philosophical. Now that every single manufactured object, even garbage cans and soap dishes at Target, are stylish and tasteful, she admitted, it was refreshing to contemplate something tacky, even vulgar, that hadn’t been over-designed and focus-grouped to death. For example: Her friend Lissi’s seven-foot-tall bowling trophy, which she didn’t win bowling; or Deb’s pious porcelain hands, now used as an ashtray; or Kris’s “Sexy Camera,” a shockingly obscene plastic novelty item.

A few drinks later, I picked up an attractive photo book — about New York’s sneaker culture, it turns out — from our hosts’ shelf. It was titled Where’d You Get Those? Aha! We’d do a book, some day, about objects with unexpected significance. We’d ask engaged, imaginative, passionate individuals to photograph their significant objects and write us a short essay about where they got them, why they kept them. The resulting collection wouldn’t be a didactic object lesson — like so many “material culture studies” texts written and edited by academics. Taking Things Seriously: 75 Objects with Unexpected Significance, as we would later title it, would instead be a wonder cabinet, a show-and-tell for our fellow enlightened savages.

This introductory essay was originally published by Design Observer.