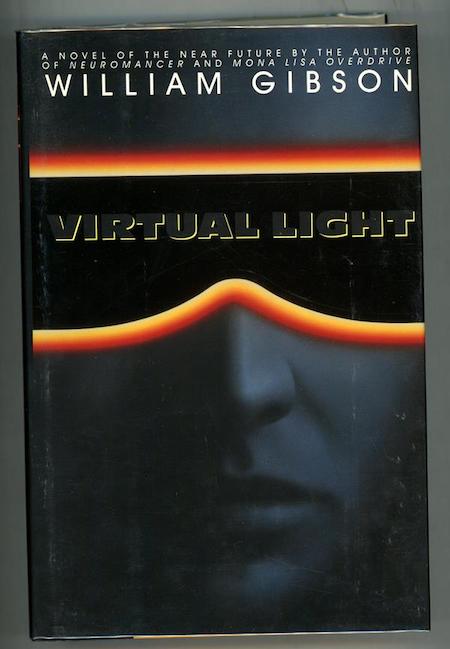 A bike messenger who lives in the Bay Bridge community — an anarchic shantytown suspended between San Francisco and Oakland; it’s divided into suspension-side and cantilever-side zones — steals a valuable pair of sunglasses, which (it turns out) allow the wearer to perceive optically encoded information about a ruthless corporate cabal’s scheme to raze San Francisco and rebuild it using nanotechnology. The first installment in Gibson’s Bridge trilogy is set in the then-near future of 2006; although the context of Virtual Light is post-catastrophic (earthquake, social upheavals), this series is not nearly as far-out as his Sprawl trilogy. Alas, it’s more realistic: the middle class has all but vanished, public space has been privatized, everything is polluted. The messenger, whose name we eventually discover is Chevette, takes it on the lam. She is pursued by two cops (Svobodov and Orlovsky), a psychotic assassin (Loveless) dispatched by the company that made the glasses, and by Rydell — a former police officer hired by the “skip-tracer” Lucius Warbaby. (Meanwhile, another subplot focuses on Yamazaki, a Japanese sociologist studying the bridge dwellers — in particular, Chevette’s mentor, Skinner.) When Rydell catches up with Chevette, he has to decide whether to take her in… or to join her in attempting to get the word out about the nanotech plot!

Fun facts: The novel was a finalist nominee for a Hugo Award.