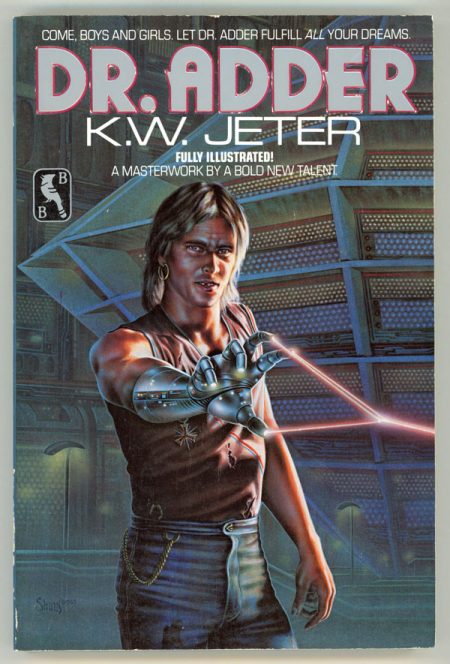 Jeter’s debut novel was written in 1972, the year that Pink Flamingos — John Waters’s trashy, hyperbolic, violent movie that notoriously features a live chicken being crushed between copulating weirdos — was released. Dr. Adder wasn’t published until 1984, because of the weird sex (it begins in a mutated-chicken-whore brothel managed by our protagonist, the disaffected Limmit) and hyperbolic violence, at which point it gained a cult following. It has been hailed as perhaps the first cyberpunk novel, which to me suggests that John Waters is the godfather of cyberpunk! The titular Dr. Adder is a Doctor Moreau-like surgeon who dwells in the ruins of future Los Angeles, reshaping the body parts of Orange County’s perverted teen runaways. Adder has become an unlikely symbol of freedom to LA and OC denizens, who are oppressed by the puritanism of John Mox, a financial titan and would-be ayatollah — whose daily TV sermons are opposed by the freaky ramblings of DJ KCID, a pirate-radio operator. What does the Internet-like space occupied by Mox and KCID have to do with the Interface, LA’s seediest neighborhood? Once a WMD-toting Limmit comes to town, we’ll find out. Dr. Adder is often funny, but it’s also misogynistic and disturbing.

Fun fact: The character KCID is modeled after Jeter’s friend, the legendary sci-fi author Philip K. Dick. Dick contributed an Afterword to Dr. Adder, in which he claimed that had its publication not been delayed, its impact on science fiction would have been enormous.