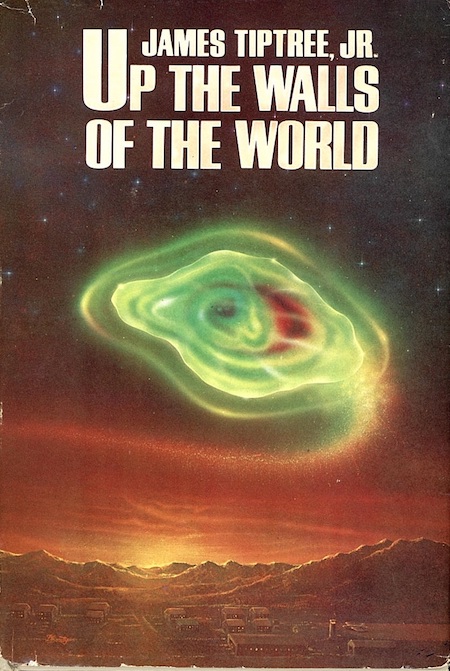 Where to begin? Here on Earth, a group of troubled men and women with telepathic abilities are being studied like lab rats by the (paranoid, drug-addicted) Dr. Dann, as part of a US Navy experiment; Dr. Omaili, with whom Dr. Dann falls in love, is a computer scientist of African descent who has been unable to make meaningful connections since her teens, due to a ritual cliterodectomy administered by her stepfather. Meanwhile, Tivonel, a manta ray-like young female on a far-off planet (Tyree), resents the males of her powerfully psionic species — who are charged with the all-important task of parenting, while the females freely sail the air currents; she is more concerned, however, when Tyree’s scientists report that a wave of death is spreading across the galaxy and headed their way. And then there’s The Destroyer, a solar system-sized, network-structured, sentient inhabitant of deep space, which muses sadly (IN ALL CAPS) on its solitude and inability to fulfill its mysterious duty… while absent-mindedly destroying the galaxy. In an effort to save her species, Tivonel “invades” Earth — telepathically. The minds of Dr. Dann, Dr. Omaili, and their test subjects are transported into the bodies of Tivonel’s inhabitants… where they are uniquely able to flourish. But what can they do to stop the Destroyer?

Fun facts: “James Tiptree Jr.” was the pen name of pioneering female sci-fi author Alice Sheldon. In the 1940s, she was an officer in the Air Force’s photo-intelligence group; in the ’50s and ’60s, she earned a doctorate in Experimental Psychology. Already well-known for her sci-fi stories, Up the Walls of the World was her first novel.