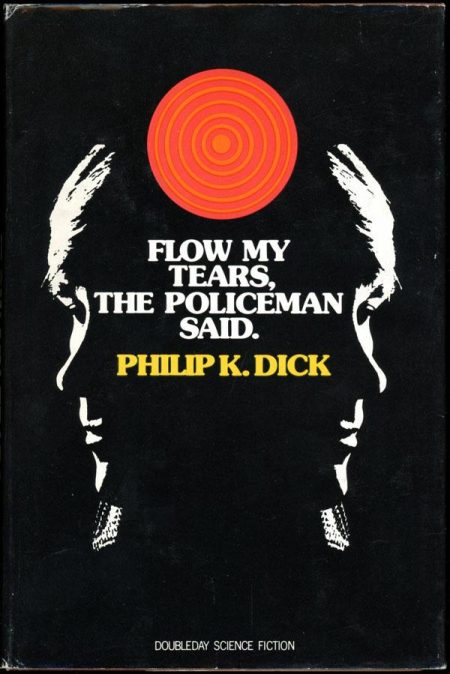 A typically dystopian, disorienting, and dashed-off Philip K. Dick joint — but one which is more emotionally resonant, more compassionate than his Fifties (Golden Age SF) and Sixties (early New Wave SF) oeuvre; in this sense, Flow My Tears, for all its flaws, points the way forward to Dick’s late masterpieces, A Scanner Darkly (1977) and VALIS (1978). The year is 1988; in the aftermath of a Civil War, the USA has become a police state; African-Americans have been all but exterminated; college students have become underground guerrillas; people use their smartphones to seek hook-ups (via the Phone-Grid Transex Network) and advice (via Cheerful Charlie, an app); and recreational drug use has been normalized. When a crazed ex-lover sics a “gelatinlike Callisto cuddle sponge” on Jason Taverner, the famous pop star (“Nowhere Nuthin’ Fuck-up” is his latest hit) and TV host wakes up in a motel to discover that… no one knows who he is. Taverner takes drugs, seeks assistance from a series of women — an unstable old flame; a leather-clad lesbian; a sweet-tempered potter — and desperately attempts to figure out what might have caused him to become a non-person. The titular policeman? He’s the twin brother and lover of the leather-clad lesbian, and a powerful authority figure who learns an important lesson in humility and empathy for others.

Fun fact: Winner of the John W. Campbell Memorial Award for Best Science Fiction Novel in 1975. Dick parodies this novel, in VALIS, as The Android Cried Me a River.