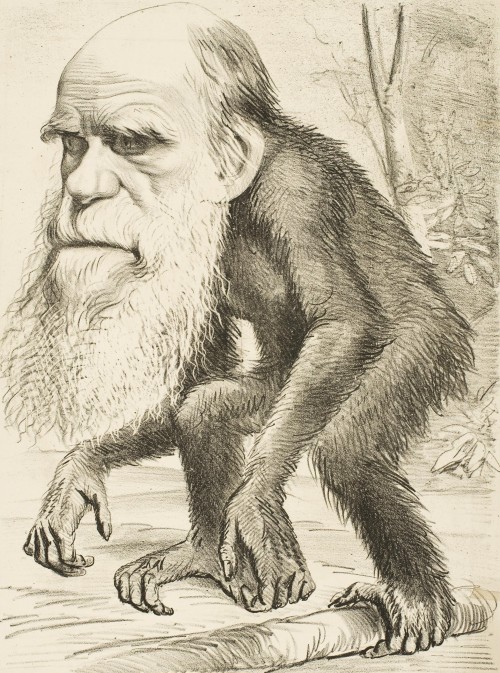 In The Voyage of the Beagle, CHARLES DARWIN (1809–82) describes being captivated by the spectacle of a spider enwebbing a wasp. He writes: “Pitying the wasp, after allowing it to struggle for more than an hour, I killed it and put it back in the web.” Darwin’s eyes looked out at the world in sympathy – but also, whatever they saw, they kept looking. His own theory cost him some measure of comfort – disarmed before the pointlessness of his own daughter’s suffering, when she fell ill and died at the age of 10. He couldn’t pluck her from her web.

Part of the problem of his theory was the intimacy it revealed between humans and the rest of the animal world. The famous Hornet caricature of Darwin as an ape, his balding pate thrust forward from the hairy orangutan shoulders, was meant to be derogatory – but it can serve just as well as an emblem. The not-quite-ness of this Ape-Man is disquieting: not quite clown, not quite monster, not quite superhero.

Many of Darwin’s insights required intimate contact with the animal world – the expected intimacy of dissection, but also sometimes a behavioral intimacy that reads as deadpan comedy. He engineered or improvised several absurdist performance pieces, with the unwitting co-members of his cast extending from the vertebrate to the invertebrate. To determine whether worms could hear, he had his family play bassoon and piano to them. Exploring the amphibious Amblyrhynchus lizard’s aversion to water when frightened, he repeatedly hurled one by the tail into a Galapagos tidepool. It’s an extraordinary image: an English gentleman traveling to the Galapagos islands to play boomerang with a lizard. What’s more extraordinary is that by such means he discovered the engine that runs the world.

READ an excerpt from The Voyage of the Beagle.

On his or her birthday, HiLobrow irregularly pays tribute to one of our high-, low-, no-, or hilobrow heroes. Also born this date: David Graeber, Marie Vassilieff.