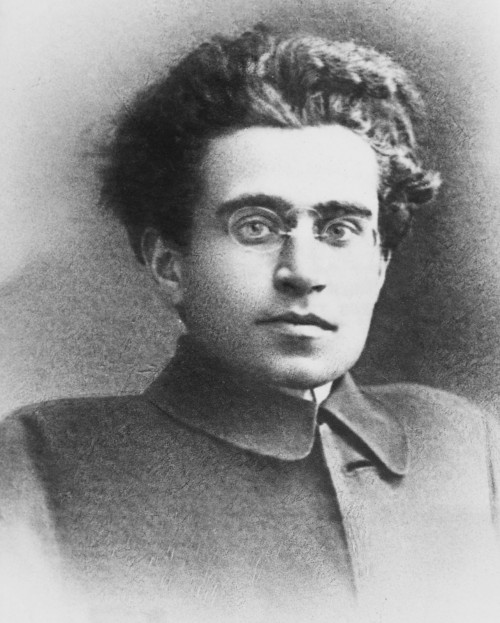 He died young, and before mid-century, but Italian political and cultural theorist ANTONIO GRAMSCI (1891–1937) still managed to update Marxist concepts for a world recognizably like the neo-liberal orthodoxy of our own day. Like other second- and third-generation Marxists such as Georges Sorel or near-contemporary Georg Lukacs, Gramsci understood that the wiles of capital ran too deep to be overthrown by capital’s own inner logic, as Marx had argued was the case. He rejected Marx’s belief in historical inevitabilism, along the way jettisoning both philosophical materialism and strict focus on the economy. Gramsci urged us to look, instead, at the cultural production and consumption that is essential to the continued success of oppressive capito-social systems, allowing individuals to perform countless comfortable but in fact imprisoning buy-ins every day. His most frequently cited concept, the notion of cultural hegemony, argues that media, culture, and ideology are never mere superstructure to foundational economic arrangements, but precisely the battleground of the soul, where victories and defeats — for the resistant, mostly defeats — are enacted. Gramsci was imprisoned for much of his short adult life; his Prison Notebooks, published in English in three volumes, are of interest to cultural theorists everywhere. They also join the poignant tradition of behind-bars wisdom, factual and fictional, that makes brothers of Plato’s Phaedo, Boethius’s Consolation of Philosophy, Koestler’s Darkness at Noon, Wilde’s De Profundis, and the voices of de Sade, Dostoevsky, Jean Genet, and Malcolm X — not to mention Humbert Humbert. Some people claim Gramsci as the source for the name of British post-punk band Scritti Politti — a slight corruption of the Italian phrase ‘political writings’ (scritti politici) — but evidence is slight. They did release a single called “Hegemony,” in 1979.

On his or her birthday, HiLobrow irregularly pays tribute to one of our high-, low-, no-, or hilobrow heroes. Also born this date: Robert E. Howard.