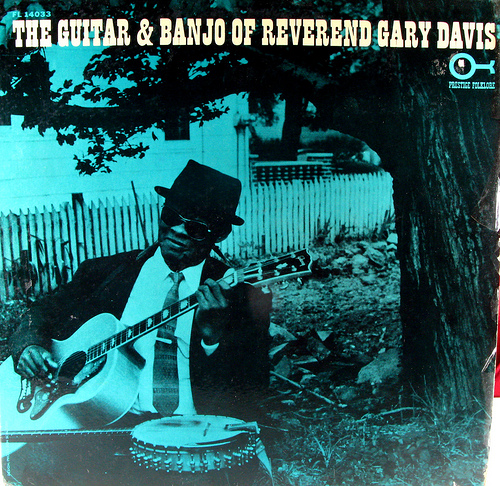 Born in South Carolina, Blues and Gospel singer and guitarist REVEREND GARY DAVIS (1896-1972) combines mumbling, preaching, singing, and exclaiming in a jumble of rhythmic sounds. Blind since he was an infant, Davis grew up in poverty and started out as a street musician. It is his unique word choice combined with his insight into the nature of sight and his talent in expressing that musically that sometimes provides a sound track for my thoughts. On being blind, Davis has said:

Since I was a man that come up that didn’t see, that perhaps if I had been a man that could see like the others… I might have seen more than I cared to look upon. Now what I am trying to get you to see: a lot of people, you know, looks on a many things, and his eyes caused them to lose their lives. And many times where many people have been strung up on limbs in the low countries and lynched just by looking. Sometimes a man’s eyes never done nothing but just look. See? I often think of that. Well, a body’s eyes were made to look right enough, but sometimes it pays a man to keep his eyes closed.

Davis moved more solidly into recording gospel music after becoming a Christian and an ordained Baptist minister. His entire oral history has been recorded by Elizabeth Lyttleton Harold. Below, he performs “Hesitation Blues.”

On his or her birthday, HiLobrow irregularly pays tribute to one of our high-, low-, no-, or hilobrow heroes. Also born this date: Willie Nelson and Alice B. Toklas.