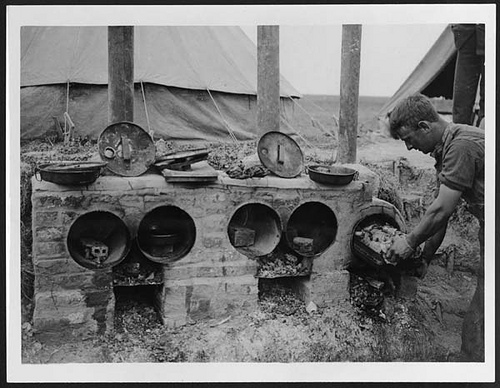 Our attention was directed this morning to an epic recipe for “Orkish Cornbread” by Serbian writer Ranko Trifković, at the online international lit blog Words Without Borders:

The last and most important ingredient is Dr. Orky’s Muffinizer. This tasteless and odorless powder is made by wizards from the crystallized farts of forest nymphs. Alas, these little missies rarely fart in volume, and wizards rarely keep the powder stocked, so you’ll need to devise a cunning plan to procure it. First get a sack of flatulent fungi from the forest Goblins, then dry them well and grind them. Next, pour the dried flatulated powder into the spring where the nymphs drink. When the nymphs fly in, wait for them to drink deeply, then catch them with the same type of net used for catching small dragons. Now rush to the nearest wizard’s, while the tummies of the nymphs swell. Even the grumpiest of sorcerers will gladly make the baking powder for you when they see what you have got. These dirty old men can’t wait to get their paws on a female, even if it’s a thumb-sized nymph. Once the wizard has squeezed the farts and crystallized a hand-and-a-half of powder, you are finally ready to make your Orkish cornbread.

Makes me think of the translations of epic poems we’ve featured at HILOBROW in the past, and the wacky, whip-smart culinary histories of Tom Nealon— like many of Tom’s recipes, Trifković’s cornbread doubles as a weapon:

Cornbread is served with sauerkraut and cream, or any other specialty that demands bread. Many young cooks complain that this recipe is too dry and their bread lapidifies. If this occurs cut petrified cornbread into wedges and slice with saw to boulder size. Use it as ammo for the catapult — massive chunks use for raising temporary fortifications and redoubts. We fondly remember the famous siege of Karrack Barn when the southern wall of a dwarf fortress was brought down by a barrage of cornbread-cannonballs, or Butthorg’s last stand when he died in glorious battle along with his companions defending his cornbread barricades.

Trifković, who translated his piece into English, concludes by noting that the bread can be enriched with dodo’s eggs and donkey yogurt. The improved version, pojara in the Serbian, he calls “pone” in English — a word for cornbread cooked over a open fire, it became a pejorative for the humor of rubes and hicks. In Serbian, pojara is cornbread prettified with eggs and cream — a peasant’s food made fancy for better times. Hilobrow cornbread, goblin-baked!

“Orkish Cornbread” is featured in Words Without Borders’ December issue, which focuses on the fantastic.