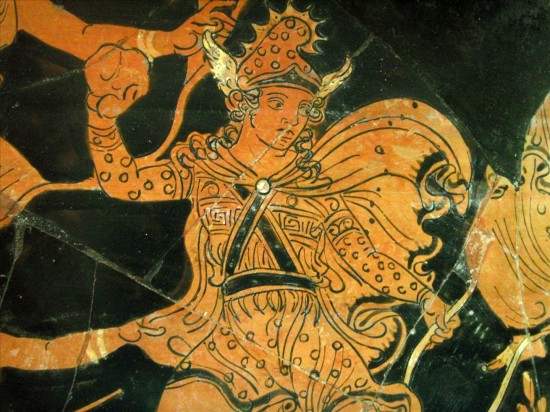 The season for the epic is upon us, when humankind’s arguably most ancient genre rises to sport beneath the constant the sun. Unlike, say, the ode, the threnody, or the dithyramb — genres which today eke out glimmering, wintry existences, creeping about the culture wrapped in cloaks — epic thrives in the sunlight. Perhaps that’s why summer is time of year when Hollywood gives our soft spot for heroes’ tales a pinch. This ancient form still manages to attract to itself the kind of blood and treasure lavished on armies and vast works of state. And yet although epic remains richly and insistently with us, its roots are perpetually elusive; something in these bloody, lovely tales beckons us deeper into ever more evocatively-figured pasts. Whole scholarly Gizehs, Macchu Picchus, and Angkor Wats have been erected to body forth from the figured words of epic the spirit of nations, the roots of cognition, and the voices of the first singers themselves. So epic is a fault line, a crash scene, the culture’s premiere clusterfuck of high and low. Which is where we come in.

Prompted by HILOBROW’s great friend and frequent contributor James Parker, who hears in the Finnish national epic the Kalevala a mixture of eldritch glamor and superhero bravado that stirs his muse, we’ve asked a few authors to give their favorite epics a spin. We’ve asked for translations from, rather than of, a few of the old tales. Over the next few weeks we’ll get to see Homer as the originator of fan fiction; we’ll voyage with that original band of spirited and world-weary dropouts, the Argonauts; we’ll chase Coyote up his shit-stained river, cracking wise with him along the way; and we’ll greet the prodigal spirit of the hero stealing home on housecat’s feet. And if we’re lucky — if the spirit of epic is with us at all — there’ll be a few surprises along the way. We’re calling the series Epic Wins, because they are, and because it does.