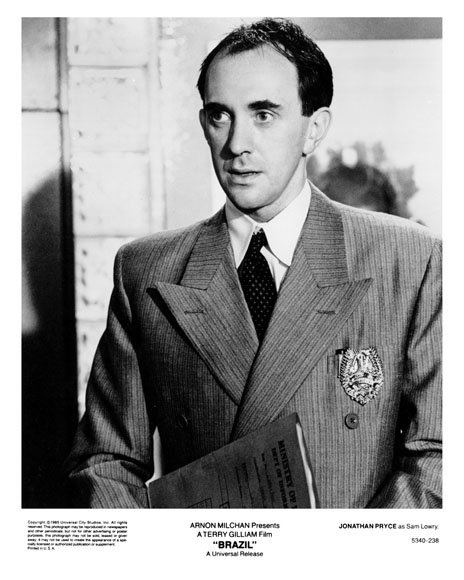 Is Welsh actor JONATHAN PRYCE (John Price, born 1947) the Christopher Lee of his generation? Like Lee, Pryce was told by instructors that he simply wasn’t built to be a versatile actor (he sold velvet paintings door-to-door to put himself through drama school), yet he’s appeared in so many films that his résumé — his breakthrough role was the lead in Terry Gilliam’s 1985 film Brazil — is staggering. Also like Lee, Pryce is thought of primarily as a “cult” actor. But let’s not lose sight of the bigger picture. Pryce sings, dances, he has impeccable comedic timing, and he is a celebrated stage actor — renowned in particular for his portrayal of Hamlet. He was one of the most underrated members of the Glengarry Glen Ross film cast. If he comes off as cheesy sometimes — he does ham it up as Governor Swann in Pirates of the Caribbean, Cardinal Louis in The Affair of the Necklace, and media baron Elliot Carver in the James Bond flick Tomorrow Never Dies — it’s no doubt because he is fully immersed in the imaginary circumstances of these films.

On his or her birthday, HiLobrow irregularly pays tribute to one of our high-, low-, no-, or hilobrow heroes. Also born this date: Christopher Lasch, Marilyn Monroe.