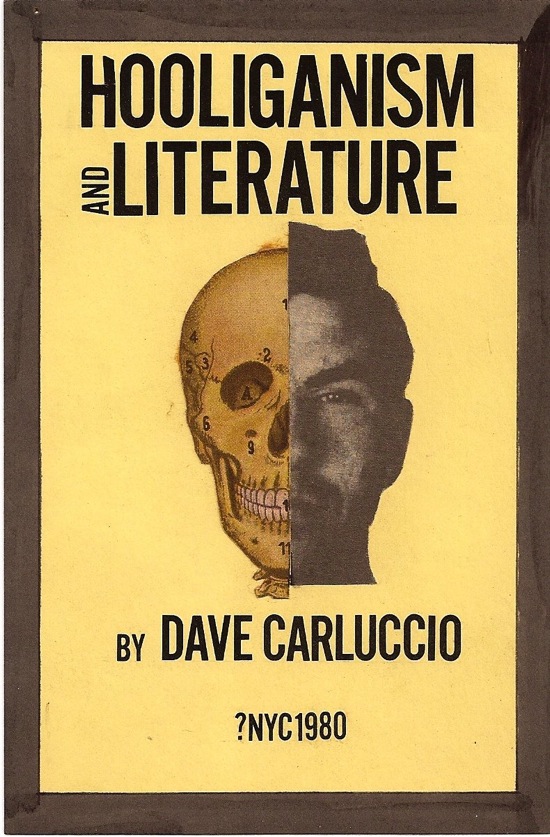 Just about as rare as if it had never been published at all, this may be the only extant copy of Dave Carluccio’s only book — typed, photocopied, folded, and stapled by its author in 1980 in an edition of fewer than a hundred, maybe fewer than twenty. The title and the cover image both refer to Aleksei Kruchenykh’s Against Hooliganism in Literature (1926), cover by Gustav Klutsis. That work in turn, which has never been translated, is to the best of my knowledge a polemic by the veteran cubo-futurist directed against some rival Soviet avant-garde gang. But that didn’t matter much to Carluccio, who most likely just saw the cover reproduced in some book and ran with it. “Hooliganism” -— a word strangely omnipresent in Russian and ultimately derived from a slur against the Irish — was to him something desirable, especially in literature, which he persisted in seeing in early-modernist terms, as a genteel tea party much in need of being forcibly invaded and broken up.

I knew Carluccio’s brother slightly in high school. We weren’t friends, and I didn’t even know of Dave’s existence until half a decade later, when he showed up at my apartment one day with a group of people who were looking for a party. I wasn’t giving a party and wasn’t in a hospitable mood, which is probably what impelled them to hang out somewhat longer than necessary, opening the beers they had brought, lighting joints, and putting records on the turntable. While most of the five or six of them were having a high old time and I was calling around trying to find the party, or any party, to get them out of my hair, Carluccio was looking through my books. Finally, when their beers were drained and before they could go for seconds, I pretended someone had given me an address on the other side of town and sent them on their way. A week later I received an envelope from Carluccio containing a sheaf of tiny stories typed on the backs of pink “While You Were Out” notes. It was the first of more than a dozen such envelopes.

As it turned out, I was to meet Carluccio only twice more. The first time was about a year later. I was coming out of a party in Tribeca, one of those huge, brawling things where maybe ten percent of the guests had actually been invited. I had no idea who the hosts were and didn’t know anybody there, but on my way down the stairs some guy I didn’t recognize rushed to catch up and immediately started talking at me. He had sent me the stories because I had Bataille and Artaud and Mayakovsky on my shelves and he knew I’d understand. He talked from Franklin Street up to Canal, east to the Bowery, north to St. Mark’s Place, and would have talked me all the way home if I hadn’t suddenly ducked into a tenement behind somebody who had just been buzzed in. His talk was all very much checklist literature — you know, the kind of thing young guys do, like throwing names of bands at each other in lieu of conversation. He was very excited about Lautréamont and Cendrars and Traven and Burroughs and Ballard and Iceberg Slim. He wanted to celebrate murder and burn down churches and throw up barricades and liberate the zoos. He wanted to invent a new language, a new literature, make the future happen today. He was talking as fast as a sports announcer in a foreign language, sweating even though it was February. But I already knew the song by heart. I had been there.

His writings were not the unpunctuated breathless screedlike verses you might expect, but on the other hand they weren’t much better. He had apparently decided that the crime novel was the essential building block of literature, the constituent unit of its DNA, and he had set about reducing and recombining it — I could just about see the wheels turning in his head — much the way punk rockers had cloned and distilled and chopped up the standard Chuck Berry guitar riff. Each story, if that’s what those things could be called, was a paragraph long, titled and signed, and each resembled a page of a crime novel if you were trying to read it while it whipped by on a conveyor belt. 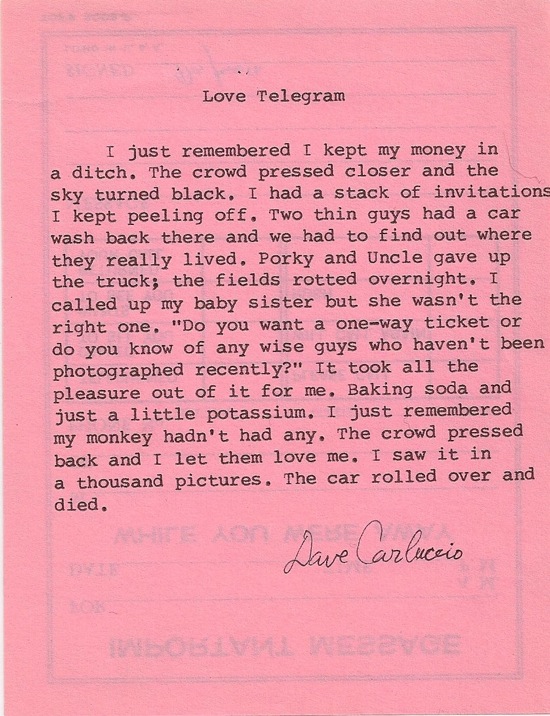 It wasn’t much, I thought. Oh, he had a good ear and all — maybe he should have been writing song lyrics. And maybe the French would appreciate it. But it hardly amounted to any kind of revolution, literary or otherwise. I can’t say that I was really disappointed. What more could you expect from the typical punk-rock overgrown juvenile, too hopped up to sit still long enough to write more than 150 words? On the other hand, he was writing something, which was considerably more than I was doing at the time, for all my knowingness and jadedness and the seniority of my 25 years. Maybe Dave Carluccio was onto something, however long it would take him to get there.

As the envelopes kept coming, their contents changed. The stories grew in length, formed series, were incorporated into collages. And Carluccio, who always wrote in the first person, became a character of his own devising, the hero of his stories, addressed by name by the other characters. One envelope consisted entirely of a sheaf of author’s bios: he was variously a rogue CIA agent, a Vietnam War deserter, a drug trafficker operating out of the Golden Triangle, a con artist masquerading as a movie producer, a public-relations expert simultaneously working for and working to undermine every unsavory public figure in the world, a chameleonic and indiscriminate traitor to all sides.

I published some of Carluccio’s work in an occasional zine I put out then, but I never managed to run into him again. My friends, who never met him at all, became convinced that I had invented him and was using the name as a pseudonym. I laughed along at first — if I had wanted a pen name, wouldn’t I have come up with something more clever? But it started to grate a bit. I wouldn’t have admitted it then, but my condescension toward Carluccio began shading into a feeling of rivalry, gradually deepening into jealousy. Meanwhile, the envelopes, which at first had all been posted in Manhattan, started appearing with more far-flung and even unlikely postmarks: Lincoln, Nebraska; Guelph, Ontario; Truckee, California; Guadalajara, Jalisco; Merida, Yucatan; Punta Gorda, Belize; Tegucigalpa, Honduras. Was he attempting to enact the character he wrote about? Or was it that his writing in some way reflected what his life had become?

1980 was an insane time, at least for me: drugs were spiraling up, romance was spiraling down, and melodrama was abundant. I had gotten a job in the mailroom of a prominent literary journal, a job that permitted me to arrive at noon — since my co-worker had to leave early to attend music lessons — and then not return after taking the mailbag to the post office, which I usually contrived to do before four o’clock. I was not serious. I was fucking around heavily, not writing, pretending to be a musician but not managing to practice. I walked around in a daze of self-kidding. Late one night in early summer I was perhaps on my way to or from a party, probably high, when I happened to pass the 24-hour copy shop on Mercer Street just south of Eighth. I glanced in briefly — it was the place where I had put together my zine, and I knew most of the employees. A few doors south I felt a hand on my shoulder. Once again I didn’t recognize him. I’ve never been good with faces, but this time there was an additional reason. Carluccio had grown, broadened, darkened — he was very nearly a different person altogether. He led me back to the copy shop, where he was collating and folding stacks of sheets laid out in a row. He finished assembling one, stapled it, signed it, and handed it to me. We must have made some sort of conversation, but I remember none of it. I didn’t even remember the chapbook until days later, when I picked my jacket up off the floor next to the bed and discovered it sticking out of the side pocket.

The book collects all the contents of all those envelopes, along with a sampling of other matter — letters, pronouncements, manifestos, poems, all of it strung together apparently in chronological order. It is hasty, confused, random, jejune — and it is bursting with every kind of world-beating youthful energy. It would have made a fine first effort for anybody, the sort of thing that sits unsold on the consignment shelves of bookstores for months and even years, and then suddenly is changing hands for four figures, and eventually cannot be obtained at all unless some major collector dies. But Carluccio’s slim volume is both exceedingly rare and exceedingly obscure. For all intents and purposes it doesn’t exist. He will never produce a follow-up. It was my friend G., then working for the AP, who spotted the item on the teletype in 1983. I’ve managed to lose the printout he sent me, but the gist was that a corpse of foreign appearance, found at a border station near Antombran, Guatemala, just across from El Salvador, had been indentified as a certain David Carluccio, 24 years old, of Scotch Plains, New Jersey. He had been killed with a machete. Local police were investigating the matter.

Originally published at Luc Sante’s blog, Pinakothek. HiLobrow.com has curated a collection of our favorite Pinakothek installments. This is the fifth in a series of ten.