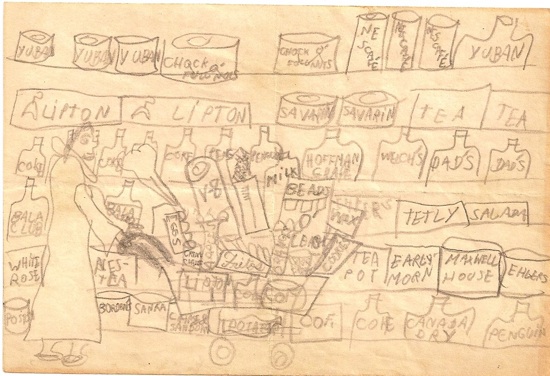 THE SUBJECT, a recent immigrant approximately nine years of age, was asked to depict his mother. It was specified that he should present her in a particular context of his choosing: a setting or activity. The resulting picture is of considerable interest. The woman is only marginably noticeable, and then only because her coat presents the largest single expanse of white space in the composition. Clearly, the subject entirely subordinates maternal affection to the far greater stimulus of commercial consumption. For that matter, the nature of the consumer products themselves is of secondary interest; the subject is enthralled by packaging, and above all by names.

Because the composition is so crowded and frenetic, it is worthwhile to break down its constituent parts. The woman is pushing a shopping cart overloaded with products down a supermarket aisle. It would seem to be aisle six: coffee, tea, juice, soda. The items heaped in the cart seem at least partly stereotypical: the protruding head of celery in particular is a trope familiar from myriad cartoons and illustrations. It might likewise be doubted whether she purchases toothbrushes on a regular basis, and ditto for “wax” — presumably floor wax. Other items seem more likely to be true to his actual experience of grocery shopping: that the sack of potatoes has been placed in the cart’s bottom tray, for instance, or the exact replication of the Fritos logo, or the prominence of the detergent Beads O’ Bleach.

But even the groceries in the cart are overwhelmed by the serried ranks of products on the shelves, which are depicted in disproportionate scale. The boxes of Lipton tea bags are nearly the size of the cart itself. (The curious symbol on the boxes represents the subject’s attempt to come to terms with the concept of the tea bag. Coming from a coffee-drinking culture, he had only ever experienced tea bags as pictures on boxes, and averred he thought they looked like “pants on a hanger.”) It is fascinating to observe the rigor with which the subject records brand names, even the ones that make no sense to him, resulting in solecisms: “Early’ Morn” for “Early Morn'” and “Chock O’ Full Nuts” for “Chock Full O’ Nuts.”

A strong reaction to American consumer abundance is typical of recent immigrants. It can take various forms: hysterical blindness, catatonic undifferentiation, at least eighteen catalogued types of aphasia. The delirium on view here, in conjunction with the subject’s powers of observation, leads us to predict that he will become a highly achieving adult, one who will subordinate all other drives and desires to the acquisition of brand-name goods. He will work three jobs, if necessary, to purchase the latest model automobile, equipped with all the premium features — such a goal, in any event, will encouragingly overshadow romance or idealism. If the subject is properly steered, he will actually work three jobs to achieve his goals. The danger remains that he may choose to rob service stations instead. The subject should therefore be closely and carefully tracked, but for now we do not recommend deportation. — Luc Sante

Originally published at Luc Sante’s blog, Pinakothek. HiLobrow.com has curated a collection of our favorite Pinakothek installments. This is the fourth in a series of ten.