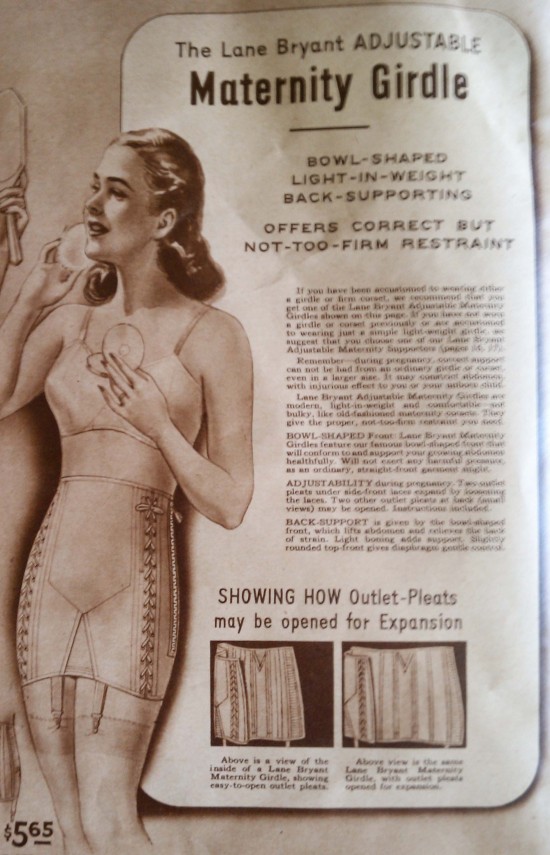 Pick up the latest issue of any celebrity publication and you’re sure to see a slew of pregnant starlets proudly parading their baby bumps in slinky gowns at movie premieres or in bikinis at the beach. The public celebration of impending motherhood is a relatively recent one; in fact, from the 1920s through the late ’60s, a woman might spend much of her pregnancy in a maternity girdle. These were nothing like today’s spandex panties or belly bands that provide comfortable support to some women late in their pregnancies. Instead, maternity girdles resembled nineteenth-century corsetry: heavily boned, zippered, and often laced up both sides, the better to expand along with its wearer. “Having a baby and a figure too — one with a waistline and curves to match those of any deb’s in town — is a feminine triumph over Nature,” suggested Los Angeles Times fashion writer Sylvia Blythe in 1941. The maternity girdle, she concluded, was “beauty armor” for the battle.

“It is very important that every woman, with the exception of the very young athletic girl, wear good support during and after pregnancy,” recommended a professional corsetiere in 1967. “Always get the model with a side zipper to avoid strain, and to the easy measure of your current waistline. Wear the garment for the duration especially if you are on your feet a great deal.” She, and other experts, suggested the pregnant woman pull the garment on while lying down. 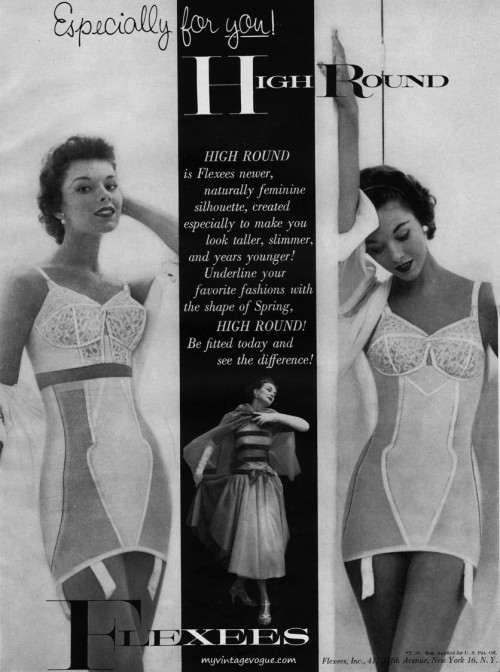 To modern ears, this sounds like a form of torture. During the mid-twentieth century, however, many women wore girdles on a daily basis and the idea of slipping into one while expecting was not as far fetched as it would be today. “I do not know a single elegant woman who does not wear a girdle under her city clothes and an elasticized panty under slacks,” wrote Genevieve Antoine Dariaux in her guidebook Elegance (1964). Nor were the naturally slender exempt from daily girdle wear: “If your hips measure under thirty-five inches and your tummy is flat, you may be able to get by with a two-way-stretch girdle. Otherwise, buy a properly fitted foundation garment with panels in front and back and a zipper closing,” counseled Family Circle’s Complete Book of Beauty and Charm (1951). A girdle also provided garters, a must in the days of nylon hose.

The maternity girdle straddled a fine line between vanity and “science.” In an effort to woo back consumers after the flapper generation abandoned corsets in the 1910s and ’20s, some manufacturers stressed that modern corsets were “scientifically designed” and had to be “scientifically fitted” for them to work properly. This argument extended to the maternity girdle. “A trained nurse will fit and adjust garments to your personal requirements,” noted a 1932 department store ad; a Lane Bryant ad from the same era noted that its maternity girdles were “endorsed by physicians.” Indeed, some doctors ordered their patients into maternity girdles beginning around the fourth or fifth month, the better “to support vital organs and ease the strain on your back,” according to Sylvia Blythe. (Of course, the unspoken corollary is that, left to its own devices, the female body was somehow medically unfit for the ordinary rigors of pregnancy.) 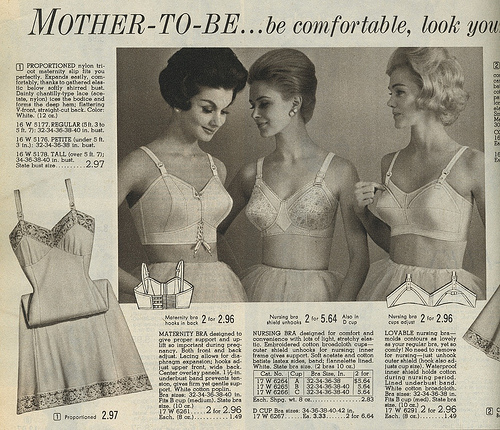 Many advertisements pointed to the fact that the maternity girdle could be worn after the baby arrived, the better to help the new mother regain her figure. In fact, “a quick return to normal figure lines,” as one mid-1930s ad termed it, was a strong selling point. Phrases like “neat appearance” and “[s]lims and controls” suggested that a pregnancy bulge could be smoothed away as easily as puppy fat. Driving home the point, the ads were often illustrated with line drawings of slim-hipped, tiny-waisted, flat-bellied women in elegant-looking maternity girdles. An industrial-strength model might run a full 18-inches from top to bottom, with an additional boned insert for extra support in its cup-shaped front and still more boning at the waist, the better to give the wearer’s figure some semblance of an hourglass.

The development of stretchy Lycra yarn in the late 1950s made for lighter girdles, both maternity and otherwise. But what spelled the end of the garment for daily wear was the advent of pantyhose a decade later, as well as the miniskirts that made it a fashion necessity. Around the same time, thanks in part to the second-wave feminists, many women returned to natural childbirth practices. Both helped to make the doctor-prescribed girdle a dusty relic.