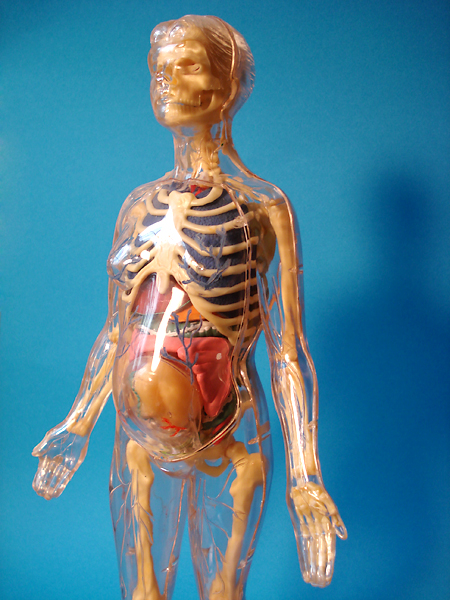 In the late 1920s, German technology produced the first life-sized transparent men. Made of a translucent material called cellhorn and packed with light-up organs, one was exhibited at Chicago’s Century of Progress fair in 1933 and ’34. Then, in 1936, a transparent woman arrived at Manhattan’s Museum of Science and Industry. She was, the New York Times reported, “a universal Caucasian type of approximately 30 years of age” and was so popular that she soon required a larger viewing area. Three years later, the Golden Gate Exhibition in San Francisco included a seven foot tall transparent woman complete with a voice recording that detailed her physical and reproductive capabilities.

Females eventually overtook males as the transparent human of choice at most museums because, according to the website RoadsideAmerica.com, American educators were “reluctant to expose kids to… glowing male genitalia.” Glowing breasts, however, were fine — as were gender stereotypes. “A ‘transparent woman,’ completely devoid of secrets, mystery, illusion or similar attributes most woman [sic] like to have, will go on public display at the American Museum of Natural History,” announced the New York Times in 1954. The paper noted that the 5 feet 7-1/2 inch tall transparent woman had measurements of approximately 38-32-39. 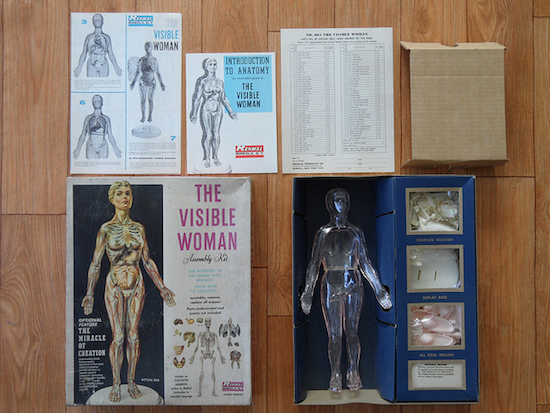 In 1960, toymaker Renwal introduced the Visible Woman, a foot-high plastic model kit clearly meant for serious-minded children under strict parental supervision, not seekers of prurient thrills. To that end, the Visible Woman had a uterus, ovaries and fallopian tubes, but lacked the more problematic vagina and clitoris, just as the otherwise anatomically correct Visible Man’s groin resembled that of a Ken doll. Nevertheless, each Visible Woman was packaged with a special “adapter kit for 7-months pregnant female.” This consisted of a special breast plate, enlarged uterus, and a wee fetus. The instructions “emphasized that assembly of this added feature is entirely discretionary,” presumably to be undertaken only after Mr. and Mrs. Visible Man were legally wed.

Despite a high-profile appearance on a Nirvana album cover in the early ’90s, recent decades have not been kind to the transparent women on display at the nation’s museums. Many have been sent to storage, and the last American manufacturer of “Transparent Anatomical Manikins” ceased production in 1992. However, the Visible Woman model kit (now manufactured by Skilcraft) is readily available at toy stores everywhere.