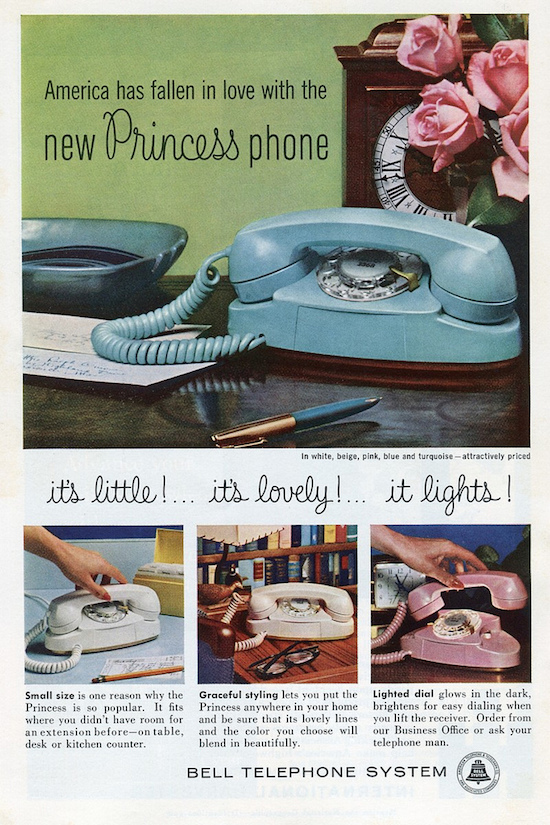 “Today’s the day you can start living like a Princess,” promised a newspaper ad in the fall of 1959. In the accompanying photo, a crowned woman clasped her hands as she gazed in admiration at a telephone proffered to her upon a silver tray. But this wasn’t the stocky black plastic model that solidly sat on desks and tables throughout America. This was something new: a sleek, horizontal beauty whose pastel coloration and oval design reminded curator Ellen Lupton of nothing so much as “a reclining nude.” This was the Princess phone, a telephone marketed almost exclusively to women during its 1960s heyday with the slogan, “It’s little, it’s lovely, it lights!” 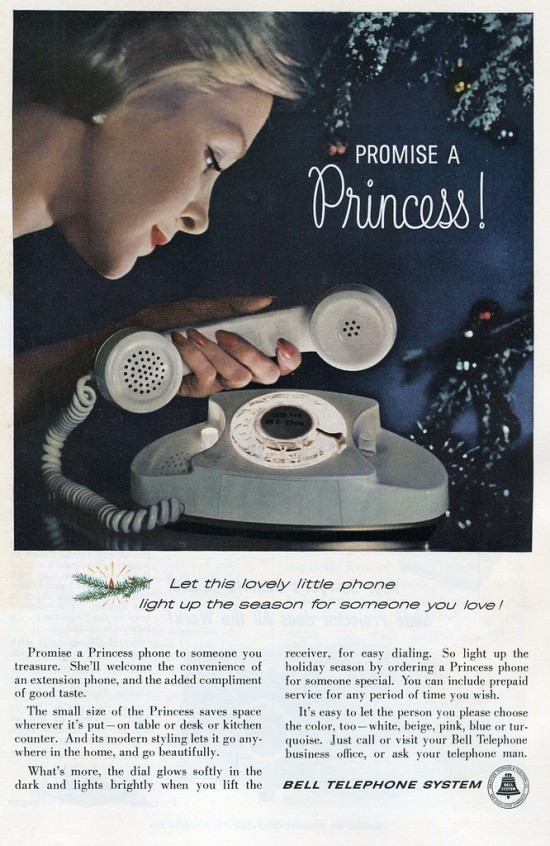 It was a brilliant yet diabolical manufacturers’ ploy: take a genderless consumer item and create a new market for it by making it “feminine.” The Princess phone was one-third smaller than regular phones — a better fit for boudoir tables and women’s hands — and came in beige, white, pink, blue, and turquoise. In keeping with its suggested use as a bedside phone, the dial lit up when the receiver was lifted, and a special setting allowed it to glow throughout the night. Early ads pictured the Princess next to a long-stemmed rose and words like “glamorous” and “lovely.” Other ads told parents that “girls especially like the Princess phone” and suggested it would make an ideal gift for “your teen-age princess.”

Of course, glamour costs money. Feminized consumer items were usually priced higher than their gender-neutral counterparts. A woman who wanted a Princess phone paid an extra 85 cents a month on her phone bill (under the AT&T monopoly then in effect, no one owned her telephone outright). In 1964, the New York Times noted that a customer who installed a Princess phone four years previously would have by then paid $40.80 in extra charges — about $262.00 in 2006. By 1968, New Yorkers could obtain a Princess phone for a one-time charge of $35.00 ($200.00 in 2006). 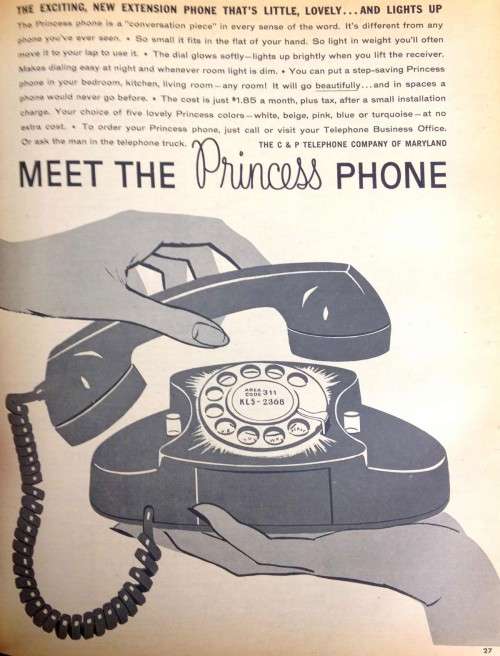 Despite their cost, they were enormously popular. The one millionth Princess phone was installed in 1960, an occasion marked by the placement of a white one in the dressing room of Chita Rivera, then starring in the hit Broadway musical Bye Bye Birdie. In 1965, the New York Times speculated that the already iconic Princess phone might one day even be considered “camp,” along with Doris Day and foam-rubber chairs.

It was all over by 1986. A spokesman for AT&T told the New York Times that “‘changing tastes’ and a demand for special features” were two of the reasons behind that year’s removal of the Princess phone from its product line. (In 1993 AT&T briefly offered a redesigned “Signature Princess” for lease only).

But perhaps the corporation gave up too soon. By the late 1990s, an online seller of vintage phones reported that he sold “a ton of pink Princess phones” to professional women “who never got them as little girls.” Currently, Crosley Radio sells a reproduction Princess phone in pink, blue, or yellow. It is equipped with push-button technology, but alas no nightlight.