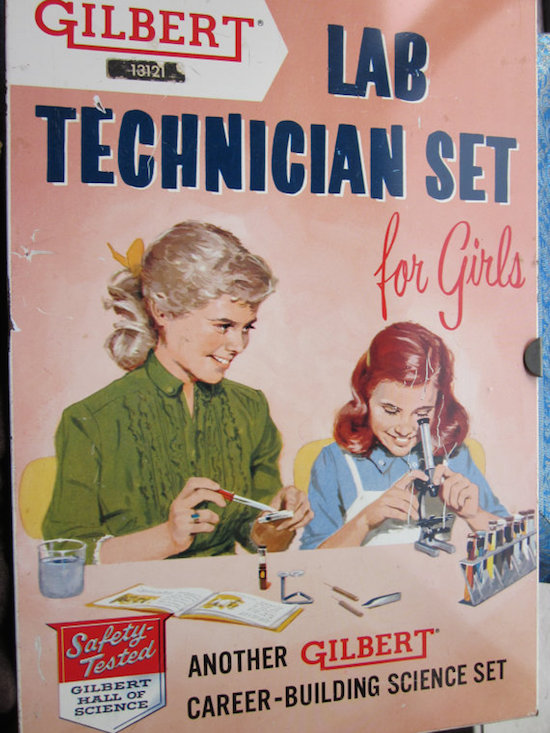 With its pastel hue and photograph of young girls in frilly blouses, the Gilbert Lab Technician Set for Girls didn’t look like any of the other chemistry kits crowding the science toy aisle in 1958. The contents, too, were decidedly girly, though mercifully the microscope wasn’t pink. As Helen Schwartz pointed out, in an essay about atomic-era toys, instead of seeing the “paths of alpha particles speeding at 12,500 miles per second!” as a junior scientist could with Gilbert’s Atomic Energy Lab kit (boys featured prominently on the box), all she got to do with the Lab Technician Set was watch “real shrimps eggs” hatch into “miniature swimming shrimp… in just 24 hours!” Definitely fun, even educational, but hardly the kind of explosive experimentation promised by the chemistry sets aimed at boys. 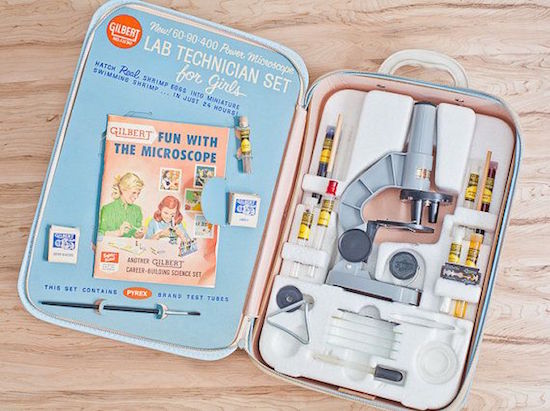 Despite its lack of pyrotechnics, a girl whose taste for science was ignited by the Lab Technician Set faced any number of hurdles if she decided to turn her interest into a career. First among them was what Betty Lou Raskin, a “lady chemist” writing in the New York Times in 1959, bemoaned as “the man-made theory that the scientific world” was “for men only.” The A.C. Gilbert Company was also prey to this mindset. A 1949 article about the Lab Technician Set’s manufacturer noted that girls did “not figure very largely” in their scheme of things: “A conspicuous few [girls] are reputed to hanker for the chemistry… sets,” but they were “invaders” to “a boy’s world.”

There was also the frequently repeated charge that it was “somehow ‘unfeminine’ for a girl to try to find out how, why or what makes this world tick.” Raskin recalled how, after she spoke a seventh-grade science class, a young woman who wanted to be a biologist asked if she was a “real scientist or an actress-scientist” because she wore a pretty suit and hat: “My mother told me that lady scientists don’t care how they look. She said they’re the kind boys won’t date.” Indeed, faced with a shortage of women scientists in the 1950s and ’60s, newspapers and magazines bent over backwards to stress the opposite. “How do you make out in the kitchen?” Seventeen asked readers in a 1951 article about science careers. “A good chemist needs the kind of imagination, ingenuity and patience that makes a good cook.” A 1965 New York Times article about a successful woman chemist noted that, “Despite her serious technical job, Dr. Thomas is anything but solemn. In fact, she bubbles with interest in matters feminine. ‘I like high heels,’ she said, ‘and I wear them in the office, and I avoid white lab coats when I can.’” The article’s subtitle noted that she had “7 Patents and 4 Children.”

If none of this stopped a young woman cold, she then faced being shunted into the para-professional position of lab technician instead of the higher-paid and higher-status “man’s job” of research chemist. Women were “employed in laboratories to do routine analysis,” wrote a disgruntled woman chemist in a letter to the editor of the New York Times in 1944. “They are patient and painstaking, say the men, so they are best fitted for such work. What they mean is nobody likes routine analysis, so let’s give it to the women.” Women were also lauded for their manual dexterity and ability to “at all times be careful of delicate and valuable laboratory equipment.” In her 1959 article, Raskin excoriated firms that excluded women from training programs, paid them smaller salaries, made them serve probationary periods not required of men, and refused to hire them “for executive positions or even for laboratory work, except, of course, as ‘dishwashers’…”

At least they worked in the lab. In 1939, a group of “educators and employers, scientists and personnel directors” decided that the “average, undistinguished girl chemist” was better off learning “auxiliary skills” like typing and shorthand, the better to use secretarial work “as an entering wedge” to the profession.