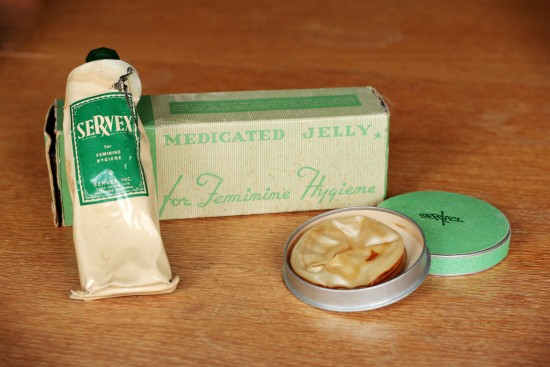 Today, when ads for birth control pills and other hormonally based contraceptives are sandwiched between those for cars and colas on prime-time television, the humble rubber diaphragm seems positively old-fashioned. But when this Servex brand model was manufactured in the early 1940s (in Hollywood, California, no less), the diaphragm was the most commonly prescribed contraceptive in America — and its technology was already a century old.

In the mid-nineteenth century, a woman suffering from certain gynecological problems might seek relief with a pessary, a hard rubber ring inserted into the vagina to help support weakened uterine muscles. When, in 1842, German gynecologist W.P.J. Mensinga covered the pessary with a sheet of rubber, the result was an early version of the modern contraceptive diaphragm. Two years later, Charles Goodyear patented the vulcanization process, which made rubber more flexible and benefited the commercial manufacture of both diaphragms and condoms. According to historians John D’Emilio and Estelle B. Freedman, a patent was granted in 1846 for a diaphragm called “The Wife Protector.”

By the 1860s and ’70s, interested parties could buy diaphragms from local pharmacies or mail order ads placed in newspapers and other, less-reputable publications. The Comstock Act of 1873, though, outlawed the mail-order sale of, among other items, “every article or thing designed, adapted, or intended for preventing contraception.”

The new law did not stop Americans from finding out about the diaphragm. Spouses shared information, as did sisters and friends. Historian Elizabeth Hampsten uncovered a letter in which a married woman counseled a newlywed friend in 1885 to “ask for a female preventative. They cost one dollar when Sis got hers…”

Whether a customer asked for a “female preventative,” “womb veil” or “Ladies’ patent shield,” the device prevented pregnancy so well that when Dr. Aletta Jacobs opened the world’s first contraceptive clinic in the Netherlands in 1882, it dispensed the Mensinga diaphragm, along with the spermicidal jelly that increased its effectiveness. One of Dr. Jacobs’s critical innovations was that the devices were fitted by trained physicians, unlike the one-size-fits-all models purchased by mail.

But importing contraceptive devices into the U.S. was still illegal. Thus, when Margaret Sanger opened the Birth Control Clinical Research Bureau in 1923, it dispensed Mensinga diaphragms smuggled in by her industrialist husband. Two years later, he began manufacturing both diaphragms and spermicidal jelly (for sale only to doctors). According to historian Andrea Tone, “medicalizing” the diaphragm eventually helped it find respectability in that it became something you got it from a well-respected doctor — not from the back of an unsavory magazine. A 1944 survey of doctors showed that 69.6 percent recommended the diaphragm-and-jelly combo to patients seeking contraception.

The FDA approved the Pill in 1960, and it soon eclipsed the diaphragm in popularity. By 1995 only 2 percent of contraceptive users aged 15–44 chose the diaphragm. Part of this is certainly a lack of marketing, but with an effectiveness rate of up to 94% and no synthetic hormones, it remains an excellent, if underappreciated, method of baby blocking. 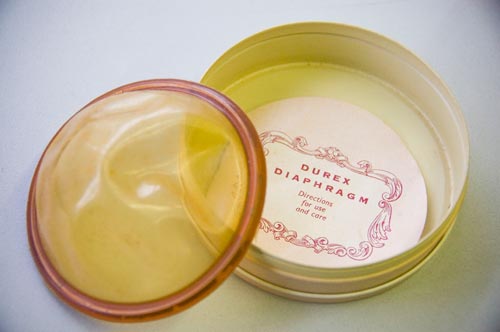