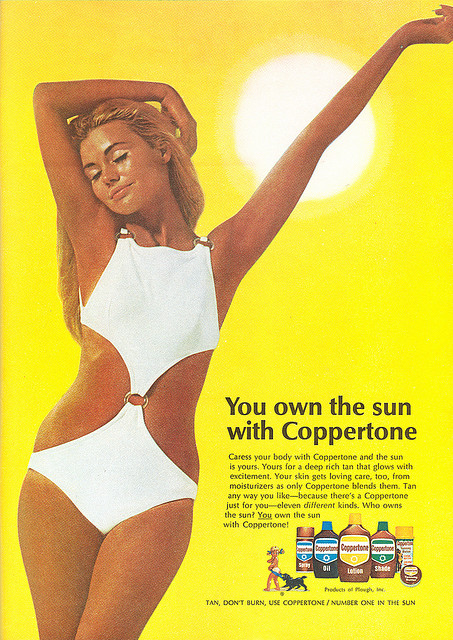 “Nothing is as transient, useless, or completely desirable as a suntan,” wrote Gloria Steinem in The Beach Book (1963), a compendium of summer reading. Steinem, still an editor at Glamour and not yet a feminist icon, concluded it was justified because it would “make you look good.” But for many centuries before tanning became a fad in the 1920s, most women felt that sun-darkened skin made you look like a peasant.

Long before the industrial revolution of the nineteenth century, European women prized a creamy white skin as a sign of high status: laborers worked in the sun, ladies stayed indoors. Pale skin remained a beauty standard and helped reinforce the color line in the antebellum United States. Women used parasols, bonnets and gloves to ward off the sun’s rays.

By the late 1800s, as more people worked in factories, pale skin became a less reliable indicator of social status. Then, too, doctors discovered that there were some health benefits from sun exposure (particularly regarding rickets and tuberculosis).

Designer Coco Chanel did the most to make tanning fashionable. A 1918 photo showed the bareheaded iconoclast lying in the sun, yet wearing gloves: white, unmarred hands still marked a lady of leisure. When a deeply-bronzed Chanel returned from a vacation in the early 1920s and used tanned mannequins in her showroom, the die was cast. The body-conscious swimming suits and evening gowns of the 1920s and ’30s both showed off and reinforced the desirability of tanned skin.

The irony of white women (and men) roasting themselves to ever deeper shades while lynching and segregation were brutal facts of life was not unnoticed by those born with dark skin. Historian Kathy Peiss quoted from a 1925 African-American press account of the scene at a beach in Asbury Park, NJ. White lifeguards “burnt so dark that they were eligible for the jim-crow car” were envied, while black bathers were restricted to a corner where buildings obstructed their view of the water.

When Coppertone sold its first suntanning lotion in 1944 (with the slogan “Don’t Be a Paleface”), the summer tan was almost ubiquitous. Sporting a tan in the winter months became the new status symbol, as only the rich could travel to sun-drenched realms. In the 1950s, however, a sun lamp provided winter tans at the cost of a bulb. Instructional graphics showed men, women, and babies relaxing under the lamp’s “healthful” rays: “Get that summer-tan look all year ’round,” it promised. Even so, words of caution crept in. Users were warned against prolonged exposure with the bulb too close to the skin, and to shield their eyes.