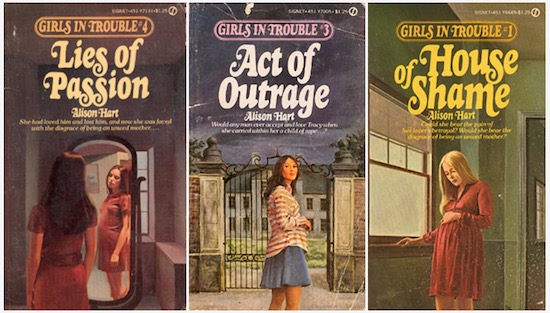 In the days when unwed pregnancy was condemned as evidence of sexual misconduct and moral turpitude, single girls who found themselves “in trouble” often “went away for a while” — spending the final months of their pregnancies in one of the many maternity homes run by charitable agencies like the Salvation Army. Here they would be concealed from view while they contemplated the error of their ways (or so hoped the institutions). Once delivered, the babies would be given up for adoption, and the girls would return to their regularly scheduled lives. According to Ricky Solinger’s fascinating study, Wake Up Little Susie: Single Pregnancy and Race Before Roe v. Wade (Routledge, 1992), the predominantly white, middle-class guests at these homes were considered “part criminal, part patient.”

This perfectly describes the Wellwood Home for Unmarried Mothers, the fictional locale of Alison Hart’s Girls in Trouble series of romance novels. Published in the 1970s but set a decade earlier, the author avoided sticky questions of bad-girl morality by creating teenage protagonists who became pregnant the moment they lost their virginity, whether by choice or violence. But while pregnancy was a central plot device in these books, motherhood was not. Instead, true to the romance genre, the central relationships in the Girls in Trouble books are between man and woman, not mother and child. Plot-wise, the babies were pesky things to be gotten rid of via miscarriage or adoption, leaving the mother free to wed the man of her dreams. And whether he was the boy from back home who doesn’t know about her past, or the gentle brother of a fellow resident, her husband’s true love provided her with the ultimate redemption, and safely confines her sexuality to the marital bed.

In the 1940s and ’50s, the maternity home romance was a phenomenon unto itself. According to Solinger, editors at romance magazines were encouraged to include the addresses of maternity homes with these types of stories, to help readers in the same predicament. But by the time the Girls in Trouble novels were published, maternity homes were fast becoming anachronisms due to greater acceptance of premarital sexuality, the availability of birth control, and recently legalized abortion. Like a monster movie, the Girls in Trouble series provided its core audience of adult females with a scary-but-safe experience of emotional horror: unwanted pregnancy, abandonment by a lover, and the loss of a child through death or adoption.

Just five Girls in Trouble titles were published in 1975 and ’76. The maternity home itself proved a longer lasting institution. As recently as 1989, a New York Times headline noted an “Anti-Abortion Revival: Homes for Unwed Mothers.”

A slightly different version was originally published in BUST #20, Summer 2002.