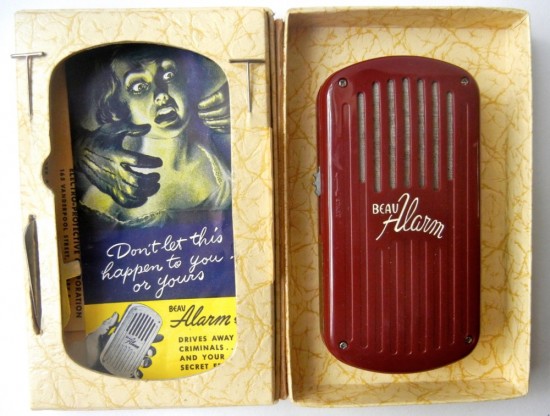 In these days of pepper spray, martial arts, and a psycho on every corner, it’s easy to idealize the “good old days” as a time when city living was safe and the suburbs were downright boring. Of course, this was never true, and the Beau Alarm is evidence of that. A personal protective device that was probably manufactured in the 1950s, the Beau Alarm’s stated purpose was “the protection of individuals, particularly women when it is necessary for them to be out in dark, unfrequented places.”

But a quick look at the instruction pamphlet that accompanied the Beau Alarm suggests it was perhaps intended to be deployed in more intimate arenas. While the words “date rape” are never used, it’s apparent from the eroticized drawing of a terrified, busty maiden on the cover, not to mention the product’s name (it’s a “beau” alarm, after all) that it was meant to protect women from untoward sexual advances — their “secret fears.” As an advice manual of the time warned, “Nothing makes a boy so violently angry as when you dangle yourself like a goodie and then withdraw when he makes the grab that you yourself invited.”

Should a girl find herself in this frightful situation, the Beau Alarm wasn’t particularly well suited to rescue her. Wind it up and it emits an anemic wail. Whether “criminals just will not hang around where an alarm has been sounded” as the pamphlet copy confidently states remains open to debate, particularly when the Beau Alarm’s whine sounds more like a lonely puppy than a screaming squad car. Then again, no pocket-sized protector has ever replaced the low-tech perfection of a good, swift knee to the groin.