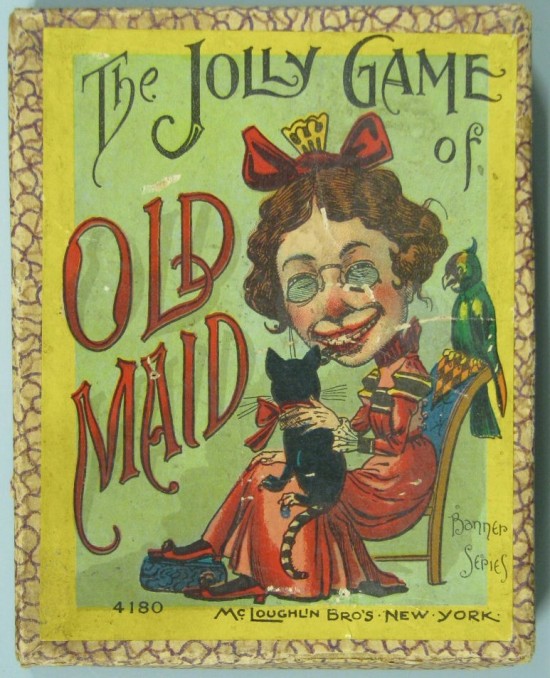 At some point in your childhood, you almost certainly played the card game called Old Maid, a staple of the nursery set for well over a century.

Of course, you don’t have to have special cards to play this simple game in which players draw and discard pairs of matching cards. In 1831, The American Girl’s Book described the rules of play with a standard deck, while a hatchet-faced character called “An Old Maid” showed up in an 1856 game called Yankee Notions. By 1900, however, the game as we remember it was available in a deck manufactured in Germany and sold in the United States as The Jolly Game of Old Maid. 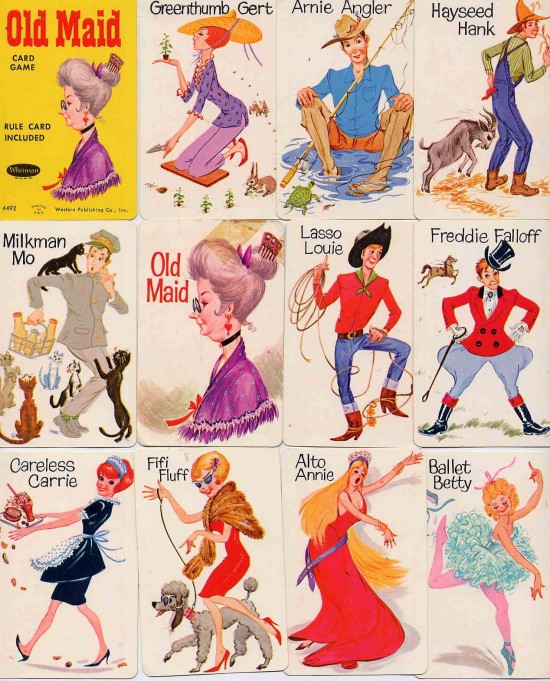 Playing Old Maid taught the same essential lesson as other girls’ games based on the rituals of dating and marriage: that woman’s appropriate role was as one-half of a preferably state-sanctioned heterosexual union. The rules couldn’t be any clearer (these date to the mid-twentieth-century): “The game proceeds until all pairs are matched, leaving the Old Maid card in one player’s hand. He is the loser.” (That’s right: he is the loser.) No one wanted to get stuck with (let alone be) an old maid — the unwanted leftover after everything else had been paired off.

The game of Old Maid played not only on the fear of remaining single, but also on the fear of “spinsters” themselves, long suspect characters in the culture at large. At roughly the same time that The Jolly Game of Old Maid was being played, Dr. George Napheys noted that “[c]ommon proverbs portray… the spinster as peevish, selfish, given to queer fancies and unpleasant eccentricities.” Napheys noted that often this characterization was untrue, but on the whole, “the popular opinion… must be granted to be correct.” 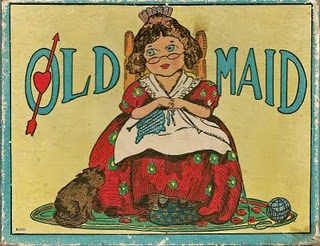 Visual depictions of the Old Maid presented her as either plump, jolly and elderly (i.e., sexually neuter and non-threatening) or horrific yet laughable, the love child of Olive Oyl and Don Knotts. In the early 1990s, two Chicago-area women, Jane Johnston and Debby Eisel, developed Old Bachelor, an updated version of the game featuring characters such as Josephine Judge, Consuelo Cardiologist, and Ann Archaeologist. The Old Bachelor himself looked a little like the Grinch with a comb-over, but Johnston and Eisel assured consumers he was “meant to be a figure of fun, rather than the cruel caricature” of the Old Maid.

Of course, if you really want to be gender-neutral, all you need to do is pull one card out of plain old deck of playing cards, and designate its mismatched partner whatever you want: the boo-boo, the double-whammy — or maybe even “the lucky card.”