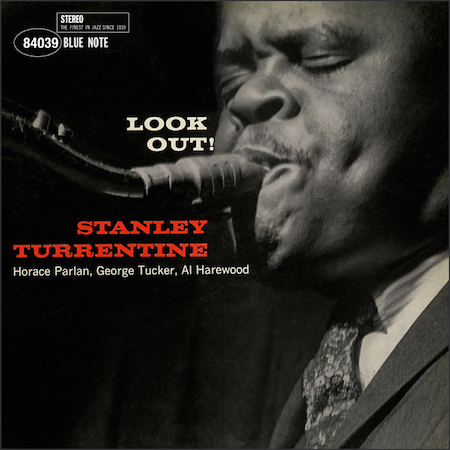 One of the most soulful tenor men of his generation, STANLEY TURRENTINE (1934–2000) was born in Pittsburgh, and raised in that fertile jazz city’s largely black Hill District. The Turrentines were a musical family: his father had been a tenorist with Al Cooper’s Savoy Sultans; mother played piano and six-years-older brother Tommy excelled on trumpet. At age 16, Stanley — already a member of the American Federation of Musicians (segregated) Local 471 — quit school to tour with bluesman Lowell Fulson and in 1953, he replaced John Coltrane in virtuoso r&b altoist Earl Bostic’s combo. Drafted in 1956, Stanley served two years with the 158th Army Band at Fort Knox before getting his big break in early 1959, when Max Roach, finding himself hornless in Pittsburgh, hired both Stanley and Tommy and brought them east. Stanley thrived, marrying Philadelphia-born organist Shirley Scott, under whose name whom he’d record throughout the 1960s, and beginning a prolific decade-long association with Blue Note Records as both leader and sideman. Though not a progressive player per se, Stanley’s sharp, gutsy sound stood out in numerous settings, from greasy blues to sophisticated hard bop. In the 1970s, recording for the CTI and Fantasy labels, his albums became increasingly funky and though the production and repertoire in this period could be less than inspired, Stanley’s blowing rarely faltered, an achievement more beloved by the people than critics. Among those people: a young rapper/producer named KRS-One, who thrillingly transformed Stanley’s “Sister Sanctified” (1972) into Boogie Down Productions “My Philosophy” (1988).

Boogie Down Productions “My Philosophy” (1988)

On his or her birthday, HiLobrow irregularly pays tribute to one of our high-, low-, no-, or hilobrow heroes. Also born this date: Agnetha Faltskog, Thomas Hobbes, Roger Corman, Joe Meek, Stewart Lee.