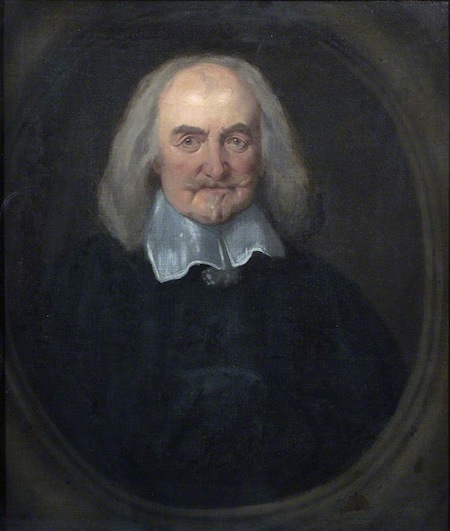 The long-lived English materialist philosopher THOMAS HOBBES (1588–1679) liked to say that, upon hearing news of the approaching Spanish Armada, “my mother gave birth to twins: myself and fear.” Hobbes, supreme theorist of social conflict, is the proper brother to fear. His vision of the state of nature as a place where life is “solitary, poor, nasty, brutish, and short” is compelling to the point of capitulation. It is anxiety, not reason, that makes us renounce our paltry freedom for the safety of Leviathan, the state as all-protective sovereign. As notional joke law firms go, Hobbes’s Solitary, Poor & Co. vies with Private Eye’s Sue, Grabbitt & Runne or the Marx Brothers’ representatives, Dewey, Cheatem & Howe. Meanwhile, everything from the English public-school tradition to the famously irascible commentaries in the philosophy journal Analysis have been described as “nasty, British, and short.” Hobbes’s lasting influence can be found in everything from the spreading virus of game theory as an explanatory mechanism of social behaviour to the triumph of physicalism in popular neuroscience. He thought humans were just complex pleasure/pain machines, atoms in motion, emotions and ambitions nothing more than summed vectors of appetite and aversion. Four centuries later, we have finally caught up to him, and agree.

On his or her birthday, HiLobrow irregularly pays tribute to one of our high-, low-, no-, or hilobrow heroes. Also born this date: Roger Corman, Joe Meek, Agnetha Fältskog, Stewart Lee.