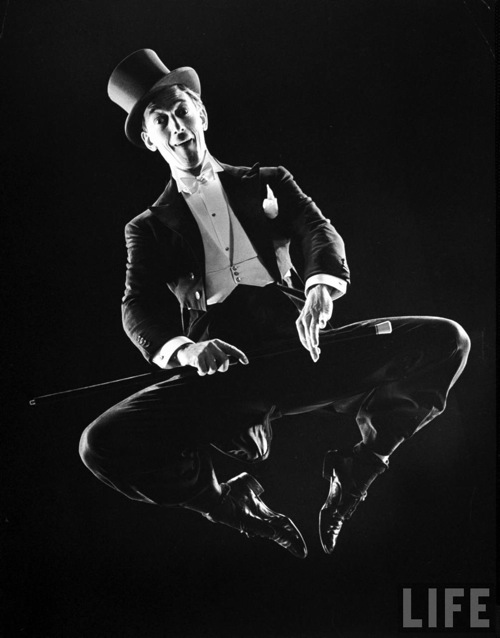 To get from Bieber back to vaudeville, you have to go through Michael Jackson, but then there’s a choice: the icy shoes and tipped-hat struts of Bob Fosse and Joe Frisco, or RAY BOLGER (1904-87). An MGM contract player in 1939’s The Wizard of Oz, Bolger convinced the studio to reconsider his assigned role; they did, and he happily exchanged the Tin Man’s short, rigid choreography for the frenetic Scarecrow’s randomly collapsing straw. Buddy Ebsen briefly assumed the Tin Man’s metallic shell (and nearly fatal aluminum dust makeup), years before striking black gold while hunting rabbits. Bolger’s flailing rubber legs, while impressive in a tuxedo, made even more sense in the Scarecrow’s unpredictable burlap leggings, and like a capoeirista feigning imbalance with feet too fast and violent to control, Bolger moved on down the yellow brick road. His career would include Broadway accolades as well as film, television, and nightclub mediocrities, but many who knew the Scarecrow as Dorothy’s first and dearest friend in Oz loved him almost personally like a family member; so directly did the film translate his effort. Asked about whether he received residual payments from the film, Bolger famously replied, “No, just immortality. I’ll settle for that.”

On his or her birthday, HiLobrow irregularly pays tribute to one of our high-, low-, no-, or hilobrow heroes. Also born this date: Max Roach.