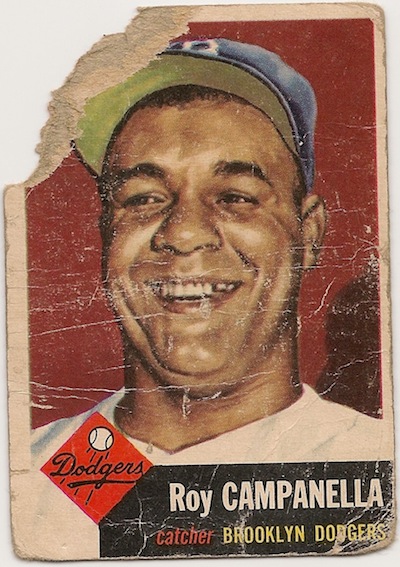 “I’ve had a struggle all my life,” noted catcher ROY CAMPANELLA (1921–93) in his 1959 autobiography, It’s Good To Be Alive. “I’m a colored man.” Still — writing only a year after a car accident left him quadriplegic — Campy remained upbeat. While racial discrimination was commonplace, some things had improved; Campy’s career and celebrity demonstrated that. “I’m willing to wait. I believe in not pushing things.” Such patience shouldn’t be mistaken for solipsism or weakness. Raised in Nicetown, Philadelphia, the youngest of his Sicilian-born father and black mother’s four children, Campy had seen plenty, dropping out of high school at 15 to begin a journey from the Negro League Washington Elite Giants and Mexican League Monterrey Sultans to, in 1946, the Nashua Dodgers. There, Campy and pitcher Don Newcombe integrated the New England league, while in Montreal, Jackie Robinson did likewise in the International League. This was as Brooklyn Dodgers President Branch Rickey intended. Robinson was called up in 1947; Campy the season after and together, they made Brooklyn one of the most justly storied franchises in sport. Campy was especially beloved, his affability often contrasted with the moody — and far more political — Robinson. Campy came around, however. “It’s a horrible thing,” he said in Robinson’s Baseball Has Done It (1964), an oral history of the game’s integration. “To be born an American and have to go to court to find out how much of an American he is… I am a Negro and I am part of this.”

On his or her birthday, HiLobrow irregularly pays tribute to one of our high-, low-, no-, or hilobrow heroes. Also born this date: Zygmunt Bauman and Ben Katchor.