In Part 3, Kirby gave his gods a twilight; in Part 4, we read of some undiscovered testaments…

Almost every handler has gotten one aspect of Kirby’s prototype exactly right — Tom Peyer and Rachel Pollack, its metaphysical tone; John Byrne, its operatic scope; Evanier, its paradoxically poignant characterization. But they all have the misfortune of working within a framework that Kirby left for them yet wouldn’t have stuck to himself (and, in Hunger Dogs, didn’t). For years there were only three successors who rethought the series’ fundamentals rather than juggling its elements, thereby matching the original Fourth World’s dynamic unpredictability in the way that Kirby’s final chapter did. Steve Englehart and Steve Gerber’s late-’70s Mister Miracle continuation found the character recasting himself as a messianic figure to guide earthlings in a Third Way between the agendas of his dual homelands’ warring factions. Carving out its own world in another way, a rare but very canonical 1987 Mister Miracle one-shot by Evanier with neo-pop artist Steve Rude invoked Kirby’s voice and that series’ humanistic charm and optimism to an almost supernatural degree. The team of Alex Ross and Mark Waid, in their mid-’90s Kingdom Come, depicted a victorious but not triumphant Orion presiding over a still-grim Apokolips whose demoralized inhabitants don’t know how to be free, while Scott and Barda do itinerant self-help missionary work amongst them. But the Englehart/Gerber run lasted only a handful of issues, the Evanier/Rude version was given just one chance, and Ross & Waid’s sequence was just a few pages in the special expanded collection of an unrelated superhero saga; for the most part, it seems that only Kirby could take the concept places Kirby hadn’t been. 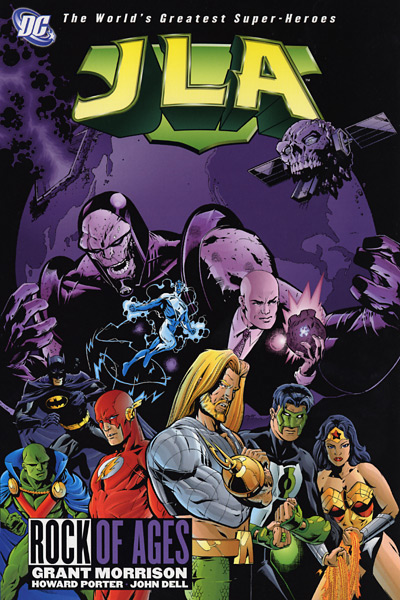 Though it may be that the masters of corporate reality just won’t let anyone else who can. Grant Morrison, both a product and practitioner of an era that knows how to channel and confer folkloric substance into popular entertainment, has time and again conjured the terrible scale and alien impulses of the New Genesis and Apokolips characters. He’s done this most memorably in the late-’90s JLA arc “Rock of Ages” (which portrayed a depressive world with Darkseid ascendant, eventually “beaten” by a stoic Orion setting off a big-bang bomb which restarts the universe without either of them), and the “World War III” storyline (not to be confused with the identically-titled DC event of less than a decade later), in which a psychic weapon banished to the fringes of spacetime after the conflict that created the New Gods’ warring worlds drifts back to reality to set off a kind of universal chain-reaction of despair.

Morrison understands the grand scale and intimate stakes that plagued Kirby’s dreams — he would awaken screaming from WWII flashbacks decades after the event — and fired his imagination. Morrison also understands the simultaneous monumentality and physicality of the Forth World’s living concepts; the New Gods are formidable figures and embodied ideas, and Morrison gives them the elemental action and incantatory speech they’re due. (Many writers, Kirby’s immediate successor Gerry Conway most infamously, feel a need to bring Kirby’s dialogue down to Earth in a way which seems by definition ill-fitting for lofty archetypes, but Morrison embraces what he feels is Kirby’s advisedly “non-naturalistic” style for these subjects.) 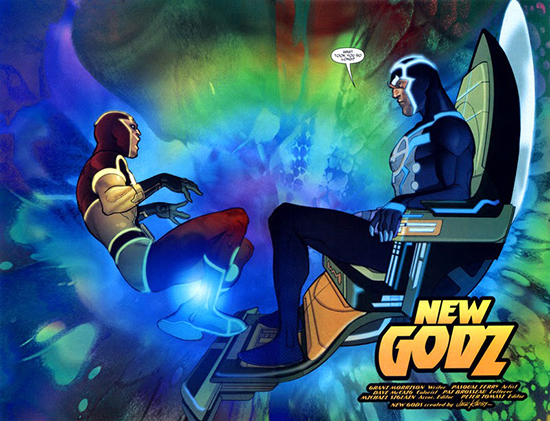 For so viscerally visual a creator, the word played a major role in Kirby’s conception of the Fourth World, with a disembodied finger inscribing the New Gods’ every move in letters of fire on a Wailing Wall-like monolith left over from their previous planet. And speech was the bridge that led Morrison from the Fourth to what he calls the Fifth World — the next generation of New Gods — in a mid-2000s Mister Miracle series starring not Scott Free but his African-American protégé from the Kirby run, Shilo Norman. In the crazy martial cadences of Kirby’s old narrative Morrison heard a connection to the pulse of hip-hop, remaking Mister Miracle as a child of the self-made-celebrity era in the context of 21st century Black culture’s media ascendance.

The Shilo series was part of the Seven Soldiers event; a set of seven four-issue segments focused on different characters from across Kirby’s and DC Comics’ canon, and interlocked with each other as Kirby had envisioned, it led Shilo into Morrison’s more big-ticket companywide event Final Crisis. In the first series Darkseid has won, and Shilo is haunted by dreams of New Genesis’ lost paradise and visited by shadowy versions of its natives and their nemeses banished to the earthly form of gangsters and homeless drifters. In Final Crisis, an unchallenged Darkseid is crashing to Earth and bending all reality with his arrival (prone to depression as Kirby was to post-trauma, Morrison has written several eloquent parables on the distortion of life and possibility by this darkening filter, and the fight back to a clarifying perception). 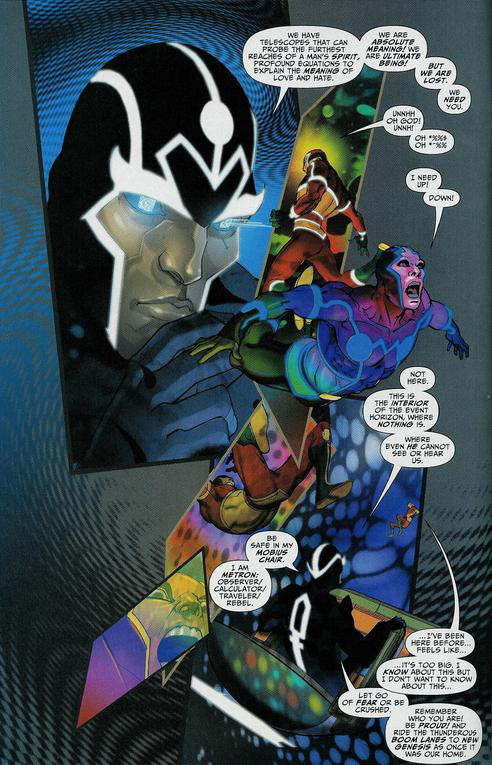 In JLA Morrison had had Metron back-construct a crucial building block of Kirby’s mythos by explaining that the Apokolips and New Genesis characters are so interested in Earth because it is the next cradle of godhood, the “Fifth World” which will replace Metron and his kind (an idea of graduation to divinity familiar from some Hindu and Mormon belief and even implicit in the basic Jesus story, and thus well in the spirit of Kirby’s syncretic imagination). 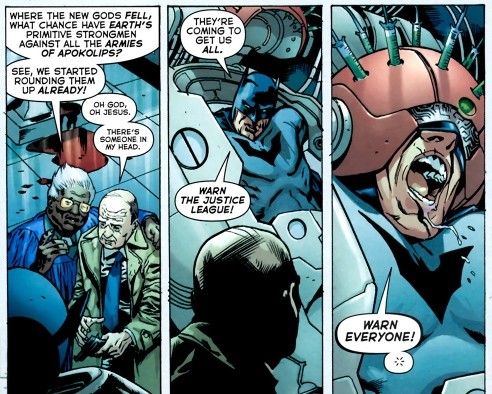 Morrison more than hinted at big plans to advance Kirby’s concept (and radically evolve its characters) in the course of Final Crisis (including the archetypal upgrade of the Forever People from the flower-power provocateurs they were at the turn of the 1960s/’70s to gothic punk misfits to match the trickster-divinity fringes of folklore that reflect the youth-culture outlands of earthly social organization). But little of this made it into the published project, with yet another reset of the familiar cast and their world at the series’ conclusion; this negated the hero and villain casualties Morrison had set up, which themselves negated the pro-forma storyline (if dazzling presentation) of Jim Starlin’s Death of the New Gods miniseries directly before. 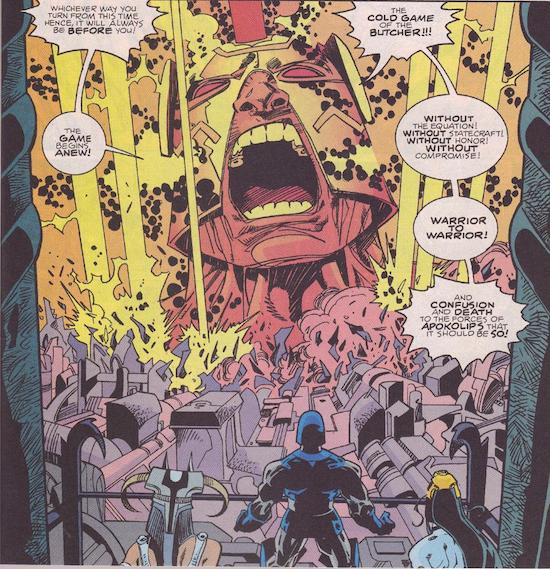 Editorial tampering will impose a status quo more absolute than any cosmic tyrant, which is why Walter Simonson’s run on Orion ended up as one of the most satisfying and seemingly canonical of anyone’s, finding its feet after a few issues to not only present an inventively philosophical Orion/Darkseid confrontation but an ingenious redefinition of Scott Free’s character, a reordering of the Fourth World’s cosmic hierarchy worthy of Kirby’s tenth-dimensional instincts, and an eloquent soliloquy from Lightray suggesting the circular nature of these heroes’ stories as literally living legends — no editor or aficionado could want much more.

In any case, the most successful “additions” to Kirby’s cosmology — and tellingly, the ones that have been allowed to stick — are the ones creators wisely brought forth by digging back into the storyline rather than trying to extend it. Alex Ross directed a masterful Justice Society of America arc by Geoff Johns and Dale Eaglesham that had a surviving deity from the pre-New Genesis/Apokolips planet, Gog, trying to dominate the Earth through killing kindness in a fearsome paternal aspect very true to Kirby’s Old Testament foundations; in Seven Soldiers Morrison reintroduced Aurakles (a character adapted from a mystic early-’70s Justice League guest-star) as an ageless superhuman genetically engineered by the New Gods in antiquity as a secret weapon and source of vitalizing myth.

End Part 4 — meet us back tomorrow as we discover Kirby’s world and who lives in it, in the concluding Part 5!