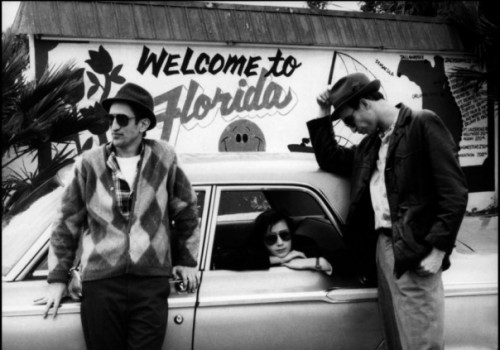 A young person looking at a poster for filmmaker JIM JARMUSCH’s (born 1953) 1984 film Stranger Than Paradise today might have a hard time seeing the fedoras and cardigan sweaters as anything other than hipsterism (in its modern sense). And the film was hip in 1984. How could it not be? Jarmusch drew his cast from the Lounge Lizards, Squat Theater, and Sonic Youth. But the feeling of the film is not vintage or thrift. Rather, there is a sense that all time exists simultaneously — that the Bowery, the snows of Lake Erie, and the white sands of Florida form a depopulated continuum where John Lurie and Screamin’ Jay Hawkins and Carl Theodor Dreyer are contemporaries. Stranger Than Paradise won the Caméra d’Or at Cannes and several other international prizes; in 2002 it was selected for preservation in the Library of Congress. But don’t hate: it really is that good. What made it such a shock thirty years ago was its pairing of formal rigor — single-shot blackouts drawing the eye to carefully composed interiors and wide, luminous landscapes — and warm, funny, naturalistic performances. Unmistakably an art film, Stranger Than Paradise nonetheless contains stand-alone set pieces that are worthy of the very best comedies of the 1930s. It established the hallmarks of Jarmusch’s work: a flawless eye, a gift for pacing and episodic structure, and a deadpan sense of humor.

On his or her birthday, HiLobrow irregularly pays tribute to one of our high-, low-, no-, or hilobrow heroes. Also born this date: Antonio Gramsci, Robert E. Howard.