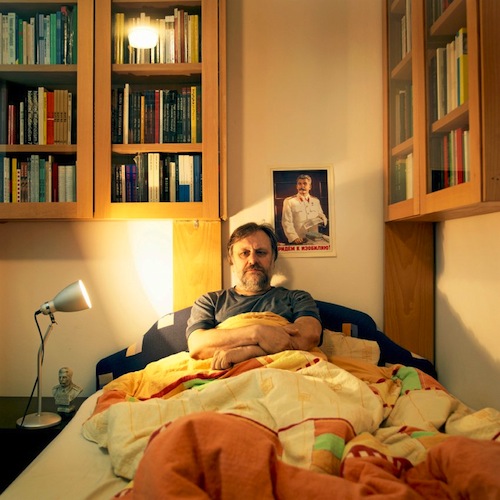 It’s easy to caricature SLAVOJ ŽIŽEK (born 1949), the Slovenian philosopher whose surname gives copy-editors fits and whose categorical imperative is that no opportunity to declaim shall ever be refused. But the wide range of Žižek’s engagements, especially what he called “the idiotic enjoyment of popular culture,” is carefully governed. His commitments in Lacanian psychoanalysis provide at once the academic sanction and the best understanding of that idiotic enjoyment, now reconfigured as jouissance, the painful pleasure of transgression. Bravura readings of Hitchcock films, Patricia Highsmith novels, and Conan Doyle stories steer his funniest book, Looking Awry (1992), toward a Mount Rushmore summit of vertiginous insight. Other thoughtful consideration of film, especially in Enjoy Your Symptom! (2nd ed. 2001), is matched by a series of forays that reveal oddball leftist politics, extensively theorized in his essential work The Sublime Object of Ideology (1989). Lately, in a style that must be described as cheerful despair, he examines such varied cultural artifacts as Bartleby the Scrivener, Nada’s ideology-busting sunglasses in They Live, and self-concealing remarks from Donald Rumsfeld to expose the inner workings of emancipation-as-repression: the state and the market are so conjoined that even repeated critical exposures are commodified and consumed without threat to the current arrangement. Enjoy!

On his or her birthday, HiLobrow irregularly pays tribute to one of our high-, low-, no-, or hilobrow heroes. Also born this date: Russ Meyer.